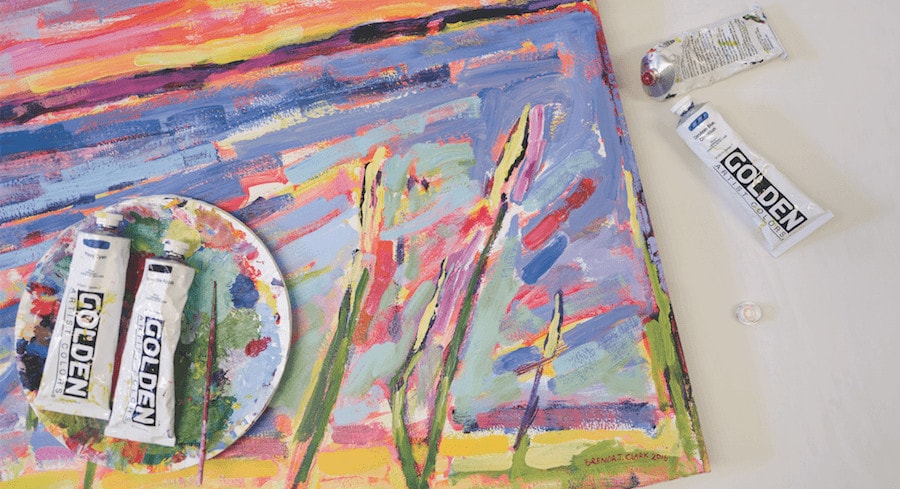 Pair a perfect weekend in September with a tour of Traverse City and Leelanau art galleries and wineries. Did you notice we said, “perfect”?

The beauty of Michigan’s north is obvious when September enters with its summer glow, and when it exits just as autumn’s brush has dabbed some colorful touches onto the still beach-warm landscape. But to find the region’s soul, look at the winding roads, the vineyards and the long stretches of soft sand as rendered by the brushes of the North’s acclaimed landscape artists.

Better yet, meet those artists on a studio tour and, if you’re lucky enough to catch them, have a chat about their particular way of seeing beauty in the world around them. Then as you explore by car or bike or foot, experience the energetic “red” of a scene as Suttons Bay expressionist Brenda J. Clark might depict it. See the intricacies of local flora as Glen Arbor artist Kristin Hurlin draws them. Watch trees almost dance, as they do when painted by Debra Sanborn of Traverse City, or feel moved to stay an hour or so after sunset to ponder the mystery within the vibrant glow of twilight, a theme explored in the work of Northport’s David Grath.

We’ve mapped out a Leelanau art gallery tour and beyond, so that as you meet these fun and fascinating artists, their methods and inspirational landscapes can spark the rest of your vacation journey (wine tour, anyone?). 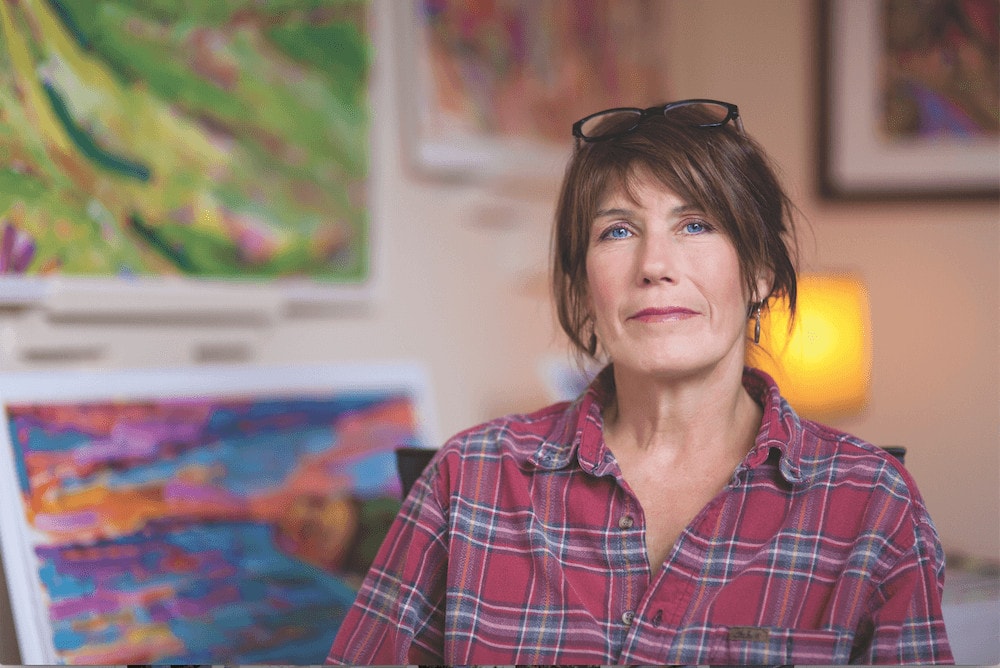  If at first you interpret the studio of Brenda Clark as a vibrant riot of color—sometimes in spots where you would never expect to find, say, a coral or chartreuse or crimson—know she happily relates to a frequent customer who tells her how his sister used to take the “good” crayons. He was left with only orange and red with which to color the sky, so that’s what he used.

Clark says her painting style is expressionism, and she generally paints on location. Don’t expect to see what you’d likely see if you were tagging along with her (and you can, on full-day classes she holds). Sometimes, you will recognize a location that inspired a painting, but know that she named one “Fishtown by me” so no one would hold her to the complete truth of the scene. Even if you don’t recognize a particular locale amid the vibrant swirls of color, Clark trusts you might recognize how you feel when you explore such spots. “It’s the excitement—the ‘look at all these birch trees!’ that I’m after,” she says—more so than the birch trees themselves. A former Michigan State University art professor with degrees in both painting and graphic design, Clark loves leading people through the five-room gallery that opens to a view of the bay, talking of what inspired what, and where the work’s boldness comes from.

Even if you don’t recognize a particular locale amid the vibrant swirls of color, Clark trusts you might recognize how you feel when you explore such spots. “It’s the excitement—the ‘look at all these birch trees!’ that I’m after,” she says—more so than the birch trees themselves. A former Michigan State University art professor with degrees in both painting and graphic design, Clark loves leading people through the five-room gallery that opens to a view of the bay, talking of what inspired what, and where the work’s boldness comes from.

She’s afraid of heights, walking on ice and of chipmunks in her gallery, she says, but she’s always confident about her work. “Sometimes I’ll bring it back to where you know what it is—this is sky and this is water—and other times I don’t,” she says. “My goal is for people to be sucked into the work and to want to move up closer.” 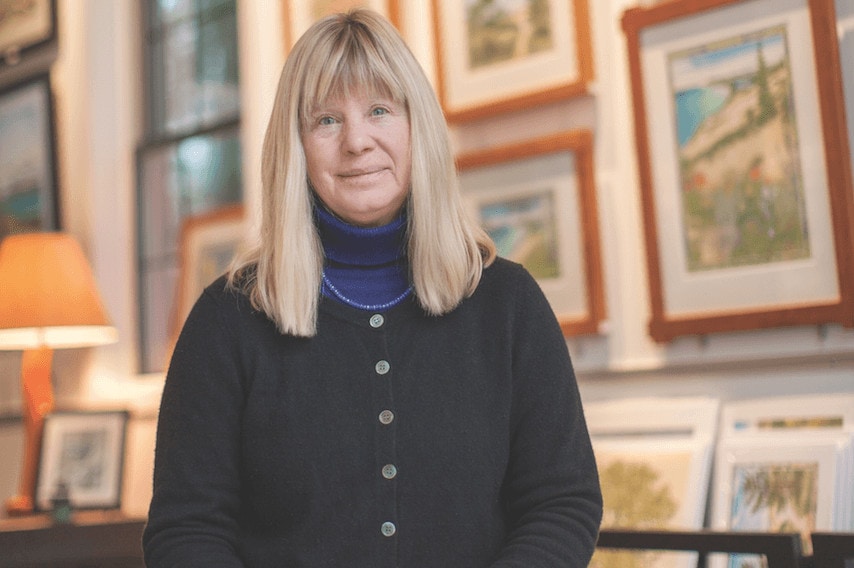 The whimsy of the new white wooden gallery with its twin peaks and fairy tale-style, is reflected in the way Kristin Hurlin renders the region’s landscapes she loves. Yet if you look closely at the colorful pen and ink drawings she’s best known for—illustrations often framed with repeating and intricate patterns—you’ll see the remarkable true-to–field guide renderings of plants and trees.

An ethnobotanist as well as an illustrator and painter, Hurlin relies upon several influences as she works. She pulls from her own experience of a place, looks to photographs, guidebooks of plants she plans to insert into the landscape. Through it all, she hopes her work will inspire others to care as passionately as she does about the plant and ecosystem diversity that makes Northern Michigan’s landscape so special. Ideally, her artwork will inspire people to preserve this place she cherishes.

Hurlin’s plant passion was inspired by an environmental ethic and her time spent mountaineering. Her desire to draw springs from an ex-pat childhood spent amid some of the world’s great art, as she explored as a young girl places like Florence, Venice and Rome’s Sistine Chapel. She remembers drawing as early as age 2, and she still uses the same type of perfection-requiring pen-and-ink set she used as a child, now adding paint to the scenes to achieve striking Lake Michigan blues, bright forest greens. 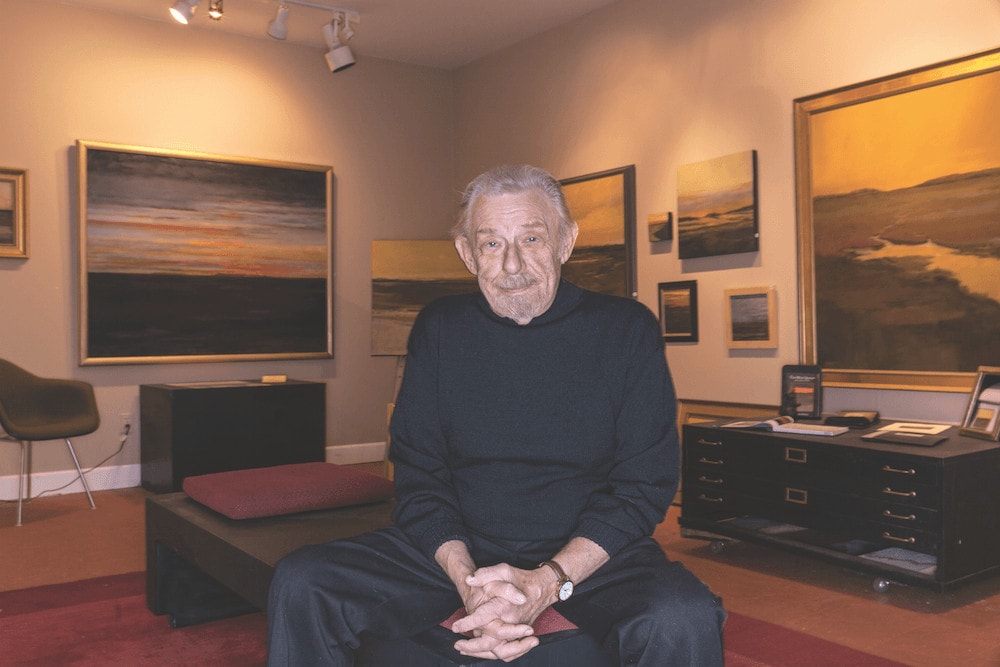 He calls himself a true Pisces, a Renaissance man who has worked building houseboats—even lived on one in Leland. These days Grath can often be found in his warm and welcoming two-room Northport gallery. Grath paints every day, and you’re particularly lucky if you catch the one-time professor of art, writer and collector of antique cars and boats when he has time for a philosophical discussion or a few stories behind his work.

Ask, for example, why there are so many bogs and creeks in his work, and you’ll hear how he likes those for the way water and land haven’t yet decided what they want to be. Ask why the Lake Michigan waters in the Manitou Passage are black and you’ll hear about the dozens of wrecks that lie beneath.

In life, David Grath decided early to be a painter, and he’s been painting Leelanau landscapes since 1958, capturing the images mentally while out exploring (often within a mile of his home) and then painting them as he remembers them. (“If I wanted accuracy,” he notes, “I’d take a photograph. I want the essence.”) That he captures through simplicity and stunningly rich color—pigmented with cadmium and barium great for capturing the lingering glow of the sky post-sunset. Ideas keep flowing, and he suspects they will until he can’t pick up a brush.

“I like the idea of being able to do something in this world that does no one harm,” he says. “It’s kindness on the surface of the earth. And if there’s a quality of beauty or nobility about the paintings, the viewer is enlightened or inspired by them.” 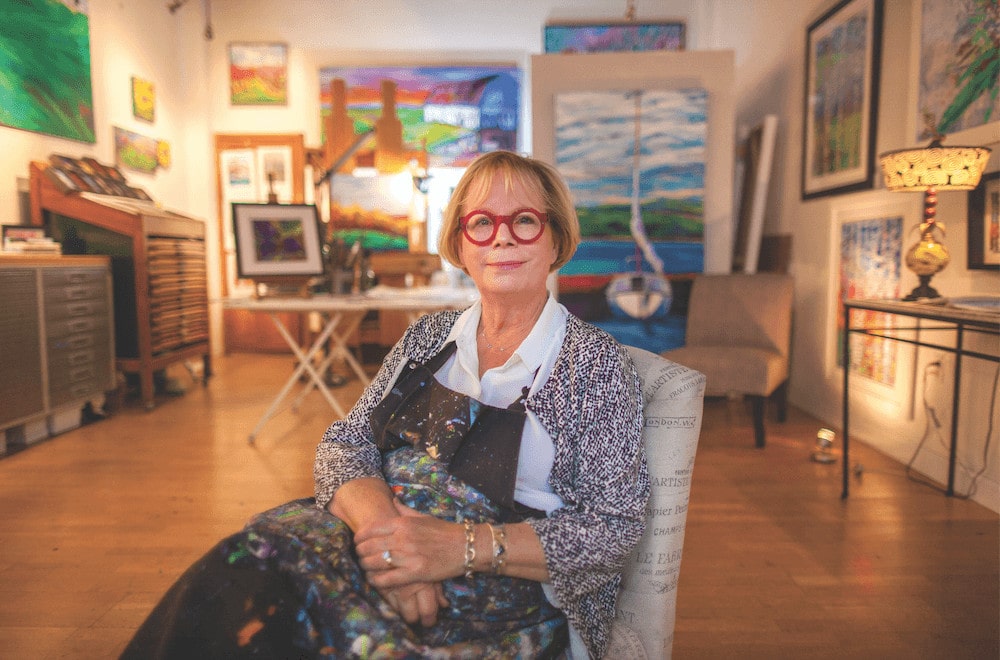 Whatever the weather outside, it’s sunny inside the small, bright studio at the corner of Front and Union Streets; there, artist and former teacher Debra Sanborn will likely greet you with the warmth and enthusiasm of her colorful, dancing landscapes. A former teacher, she’s known for her generosity of spirit and time; artists looking for tips are often among the most frequent visitors.

But ask what inspires her work, and she’ll either step outside and glance left toward the vibrant blues of Grand Traverse Bay or straight out her window; “See that,” she says as blooms flutter in the wind. “Look at that movement!”

Landscapes are never stagnant as Sanborn paints them; cherry trees dance, and water and clouds swirl, all in vibrant colors. Her work gets bigger and bolder over time, she notes, from aging eyes, perhaps, or the way she forever seizes opportunities in life. Sanborn has taken to cutting up her used paint palettes and working the lively splotches into a backdrop for a composition. And she often paints on location (when she’s out of the studio, she’ll leave a note saying how to find her!) or via photographs.

Any scene might inspire—a towering tree framing an East Bay view or a pear orchard she recently noticed on her way to the gallery. What she most loves is seeing the way any scene might reflect movement, seasons or changes in light. “I set out with an idea but start feeling things,” she says. “It takes on a life in itself.” Birch trees are one constant. She’s tried to move on from her birch theme, she says, but their magic keeps luring her back. “They’re bold and strong, yet they’re really kind of fragile.” 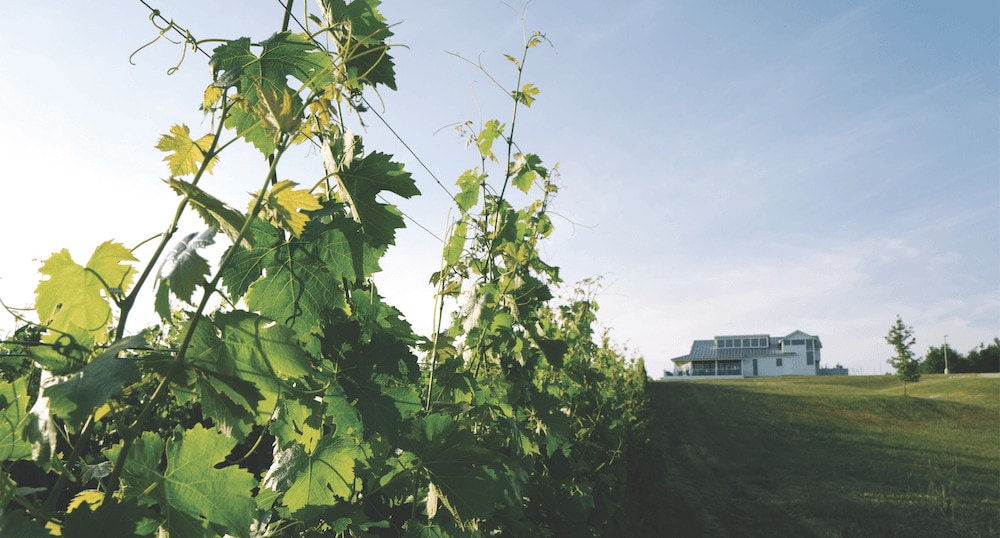 Vineyard Immersion: Now that Leelanau’s wine country is receiving national and international attention, you won’t want to miss tracing the twisting two-lanes rimmed in the vineyards that create the award-winning vino (and inspire marvelous landscape art). The Leelanau Peninsula Vintners Association makes it easy by mapping out wine tasting routes, three loops, each roaming a specific undulating piece of Leelanau. Maps at lpwines.com. Find a tasting room directory and lots more wine info here. Fans of a big view with their vino should stop in to Shady Lane Cellars, near Suttons Bay, or Rove Estate Vineyard, near Traverse City.

Day at the Beach: Visit Leland’s South Beach, which makes regular appearances in the work of Brenda J. Clark, thanks to her frequent visits while walking her dog. On occasion, she spots beauty and light so irresistible that she’ll rush the dog home and come back to paint. The beach lures on bathing-suit and sweater days alike, and picnic fare’s as close as Leland’s Fishtown, repurposed commercial fishing shanties now housing shops selling fresh whitefish, classic candy, jewelry and hand-made tiles. Be sure to try the Village Cheese Shanty sandwiches on pretzel bread. Sunsets are particularly stunning here, and remember to stay through twilight to catch the glow conveyed in David Grath’s work.

Landscape to Table: Restaurants 9 Bean Rows and Martha’s Leelanau Table in Suttons Bay, and always popular. Trattoria Stella and The Cooks’ House of Traverse City put a gourmet spin on ingredients just picked from organic farms, or aged at a local creamery. For a drenched-in-luscious view, dine at Glen Arbor’s Blu, where the blue of Lake Michigan just steps from the deck pairs perfectly with the French-inspired menu.

Stays with a View: The rolling hills, vineyards, classic red barns and horses, too, make for a landscape irresistible to landscape artists, naturally, but guests, as well, at Black Star Farms in Suttons Bay. The inn’s locally sourced gourmet breakfast is a highlight, as is the private guests-only wine tasting.

Prefer downtown lodging? Walk to Traverse City’s beaches, galleries and classic movie theaters from the elegant new-this-year Hotel Indigo. On property, soak up a bay view from the roof-top deck. In lobby and rooms, find an eclectic décor that inventively expresses the region’s lumber era roots within the context of an urbane vibe.

This article was originally featured in the September 2016 issue of Traverse, Northern Michigan’s Magazine.
Subscribe here.