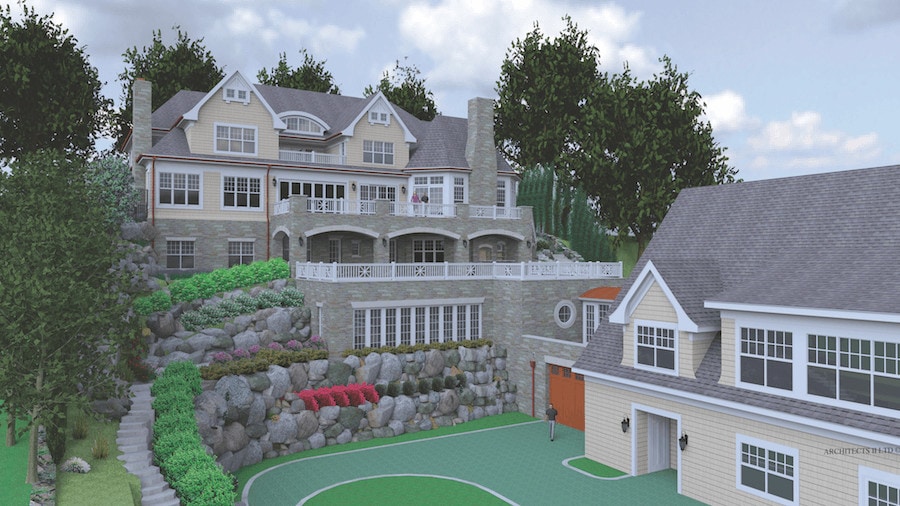 For the second time this fall, Northern Home & Cottage opens the doors to some of the most exciting homes in the region on the Petoskey Area Home Tour Saturday, October 15. On this tour, you’ll see the grounds and interiors of seven homes in Antrim, Charlevoix and Emmet Counties.

Proceeds raised during the Petoskey Area Home Tour will benefit Northern Michigan non-profit, Child and Family Services of Northwestern Michigan. Save by purchasing tickets to the 2016 Northern Home & Cottage Home Tour at MyNorthTickets.com.

This Charlevoix home on the Northern Home & Cottage Petoskey Area Tour is located at 304 E. Dixon Avenue. It’s being built by Birchwood Construction of Harbor Springs, 231.439.1600.

We have to assume that Jim and Patti Anderson, the owners of this home on Round Lake, share a wonderfully understated Midwestern sense of humor with Garrison Keillor who made the humble town of Lake Wobegon famous on his radio show “A Prairie Home Companion.” The fact is, the Andersons’ home—which they have named Camp Wobegon stands as one of the grandest that we have ever had on a tour. As Tom Adams of Birchwood Construction says of the project: “When I  first met with Jim he said budget and schedule are very important, but that quality was his number one priority.”

Architect Timothy Hansma, of the Northern Michigan and Cincinnati-based firm Architects II Ltd, began designing this home 12 years ago. The Andersons were involved every step of the way, insisting, Tim recalls, that the home embody the “essence of Charlevoix.”

Indeed, the couple knows this precious town wedged between Round Lake and Lake Michigan well. Both Jim and Patti have vacationed here for decades. Drive Charlevoix’s leafy-streets and you will see what the Andersons mean by its essence: gracious turn-of-the-last century homes with wide porches, the occasional turret, and built with remarkable craftsmanship.

The Andersons chose the Shingle-style for their home—an early 19th-century style so named for its cedar shingle siding—outfitting it with a deep front porch, so capturing the essence of Charlevoix. Copper domes over the turret and part of the front porch are a nod to Victorian splendor.

Blue views of Round Lake wink and tempt through glass folding doors, terraces on multiple different floors offer views of the sumptuous landscaping below, there are several food preparation areas for various purposes, as well as an in-home theater, and the state-of-the-art workout room and endless pool that completely opens to the outdoors.

Spectacular as it is, this is a family home—one where the grandchildren are welcomed to Camp Wobegon, housed, along with the game room, on one of the lower levels. The sleeping quarters at Camp Wobegon is equipped with 10 murphy beds— five along one wall for the girls, five along another for the boys. On rainy days, the grandkids will curl up with books in the children’s library housed in the turret with its clerestory windows that rise two floors. Plans for a faux-painted sky on the turret ceiling are in the works.

One more important note about the home: It is universally accessible, largely because the Andersons work with various charities.

Tourgoers will want to know that Camp Wobegon won’t be entirely furnished at tour time. Trust us, however, there will still be more than enough to make your visit more than worthwhile.