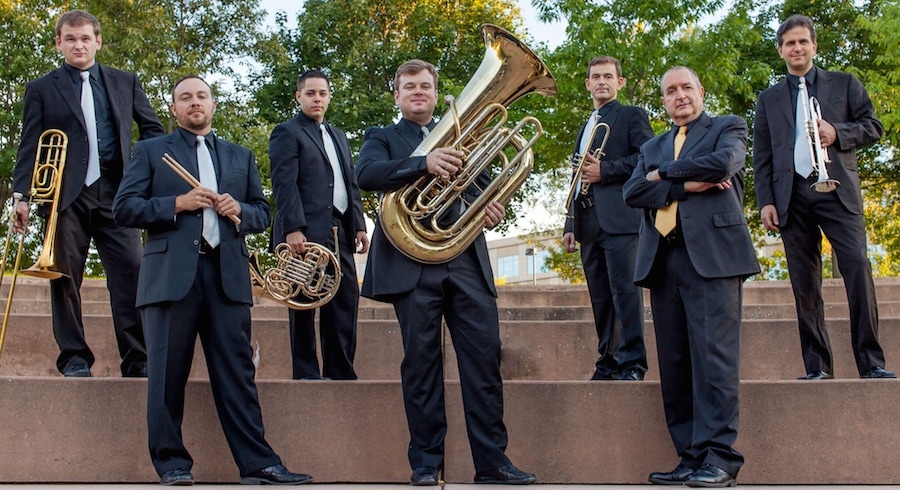 Dallas Brass was founded by trombonist Michael Levine in 1983. It has gone on to become one of the most popular and honored groups of its kind. The group is currently comprised of Levine, trumpeters Luis Miguel Araya and Terry Sawchuk, Juan Berrios on horn, Ryan Christianson on trombone, Paul Carlson on tuba, and—surprisingly—drummer and percussionist Andres Crovetti. The addition of a drummer gives the group a different sound than many of its compatriots and allows them to more easily move from genre to genre.

In keeping with that theme, the show at Hart will also feature the West Shore Community College Wind Symphony performing a selection with the Dallas Brass entitled “An American Tableau,” written in 2014 by John Wasson. The group has performed at Carnegie Hall, the John F. Kennedy Center in Washington, DC and has toured overseas to Europe and the Far East. It has performed for Presidents Gerald Ford and George H. W. Bush, appeared on the CBS Early Show, and the band’s music has been used numerous times on the television show The Young & The Restless. The group is also dedicated to educational activities, offering clinics and master classes at its school performances.

For theater enthusiasts, the season will open in early November with a WSCC production of Godspell, with Noises Off in March. Other shows include South American harpist Edmar Castaneda, Winfred Haun & Dancers and West Shore student ensembles. For a complete list, go to WestShore.edu.

“We had a blast!! The kids and community were so excited and there is a huge buzz going around the schools about what a wonderful experience this was.” – Kelsey Lawrence, band director, Adams Middle School, Newcastle, Wyoming

“The concert was phenomenal! These guys are not only outstanding musicians, they are top notch professionals, educators and great people. Thank you for a GREAT experience.” – Tom Reifenberg, band director, Greendale High School, Greendale, Wisconsin

Tickets are $15. Go to MyNorthTickets.com