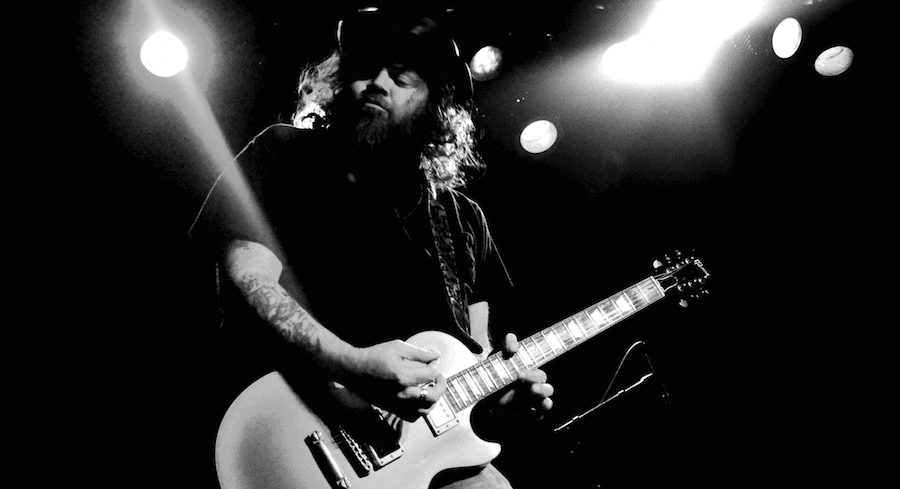 “Those of us who play the guitar both young and old know Kenny Olson,” Eric Clapton has said. Kenny has played alongside Kid Rock, Uncle Kracker, Hank Williams, Jr., Sheryl Crow and many others. MyNorth Media entertainment writer Ross Boissoneau gives us a look into the background of hard-rocking guitarist Kenny Olson before his Traverse City event at Streeters on September 17.

Guitarist Kenny Olson and his band

Detroit’s Kenny Olson shot to fame alongside Kid Rock as the lead guitarist in Rock’s Twisted Brown Trucker Band. Born and raised primarily in the Motor City, Olson says there was always a guitar around the house. He was exposed early on to blues and rock classics and soon grew to love everything from Howlin’ Wolf to the Rolling Stones, Led Zepplin to Miles Davis. Growing up in Detroit also exposed him to Motown, Iggy and the Stooges and Bob Seger. Jimi Hendrix was an early idol, and later in life Olson was able to repay his debt in a manner of speaking (see below).

After decamping first to New York and then to Los Angeles, he returned to his hometown after the earthquake in 1994 destroyed his LA apartment. It was after that when he began collaborating with Robert Ritchie, a.k.a. Kid Rock, a partnership that lasted for five albums, until 2005 when Olson decided to go out on his own.

In addition to his work with Kid Rock, Olson contributed to Uncle Kracker’s double-platinum debut Double Wide, Run DMC’s Crown Royal, Hank Williams, Jr.’s Almeria Club Recordings, Sheryl Crow’s The Very Best of Sheryl Crow and others. He also began an association with the Hendrix family and Experience Hendrix, LLC. Those tours and the recording Power of Soul: A Tribute to Jimi Hendrix found him collaborating with Hendrix cohorts Billy Cox and Mitch Mitchell and Howlin’ Wolf guitarist Hubert Sumlin. Jimi’s father Al Hendrix arranged for Kenny to play with his favorite singer, Chaka Khan; the two recorded the Hendrix classic “Little Wing.” His recording The Kenny Olson Cartel (also the name of his band) finds him once again mixing and matching styles, from hard rock to soul, funk and r&b.

“Those of us who play the guitar both young and old know Kenny Olson.” – Eric Clapton

“There’s an old school, Motor City, Detroit rock ‘n’ roll vibe to it, but it also has the soulful, Motown funky vibe.” – Kenny Olson on The Kenny Olson Cartel

Tickets are at $13. Go to GroundZeroOnline.com