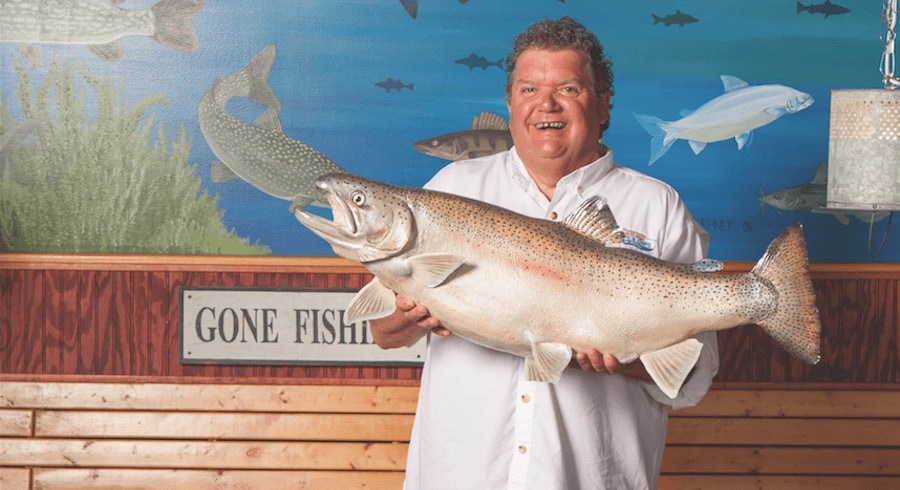 Fans of Scalawags fish and chips restaurant in Traverse City have likely noticed that big fish hanging above the front door. But have you heard the incredible story of how it got hooked?

Emil Dean hooked it. Reeled it in. Even mounted it to the wall. But the big fish still got away. The first memory son Rick Dean has of his father’s then record-setting Great Lakes steelhead is watching his dad crouching over the bathtub, contemplating what to do with the 21-pound fish lying inside.

Eventually, Emil settled on having the fish mounted and displayed it proudly in the family home for a few years before loaning it to a Michigan hunting and fishing museum near Lansing. But when the museum owner fell on hard times, much of the collection was hastily auctioned off—including, accidently, Emil Dean’s record steelhead. “We didn’t even know that was happening until the fish had already been sold,” remembers Rick. “After that, we tried to locate the fish. But there was no way of tracking it down.”

The fished seemed lost for good until years later, when Rick and his wife walked into Scalawags, a fish and chips joint in downtown Traverse City. “We were sitting down to eat, and I looked up and said, ‘Hey, isn’t that my dad’s fish?’” Rick says. He then asked to see Scalawags’ owner Jamo Washburne, who, hearing the story, quickly took the fish down from the wall to give Rick a closer look. Sure enough, Emil Dean’s name was on the back of the fish.

The fish had passed through at least one other set of hands before making its way to Scalawags. Washburne says he bought the fish when he was scrambling to find some last-minute decor for the restaurant’s grand opening. “I was going to garage sales, antique stores—and that’s when I ran into this guy who said he had some antique fishing stuff,” Washburne says. “He told me he had a buddy that was going through a divorce and had some mounts he was selling because he needed the money. And the guy turned up a few days later with this huge steelhead.”

Looking back, Washburne says he doubts whether the man was telling the whole truth about where he got the fish. But unaware of the steelhead’s storied past, he handed the man $400 and hung the record-setter above the restaurant’s front door. And that’s where it stayed for a good seven years—until Rick Dean and his wife came in for dinner that night.

“We got to talking about the fish, and his father—who, turns out, was a really famous fisherman in this area,” Washburne says. “And Rick explained to me that his father was in the hospital. He had cancer. And I just looked at him and said, ‘Well, you’re not going home without that fish.’ With his dad being sick and all, I think anyone would have done that.”

Rick accepted Washburne’s generous offer and took the fish to his father, Emil, who hung it proudly in his apartment in Cadillac, until he passed away a few years later. But after that, Rick Dean decided he wanted to pay Washburne’s generosity forward.

  “One day, in walks Rick and he’s got the fish,” Washburne says. “And he tells me about how his dad got to enjoy it for the last few years of his life. But he tells me he thinks it should be here now. I was really moved.” So up went the fish again—right above the front door in Scalawags. And barring any further twists of fate, that’s where this ‘one that got away’ should be sticking around for a while.

Scalawags is located at 303 E State St. in Traverse City.