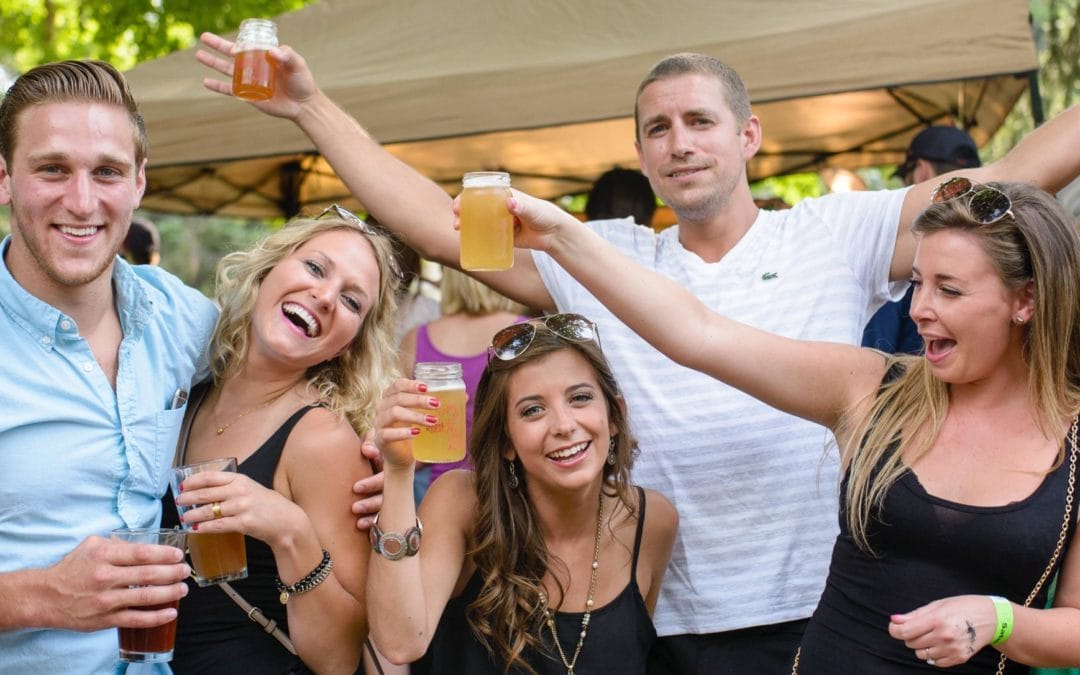 Sure, the Traverse City Summer Microbrew & Music Festival 2016 has breakout bands queued up for the ultimate Northern Michigan music binge this year … But half the experience is about the beer! You could spend a week and not get to all the beer that convenes on the lawn at the Grand Traverse Commons. So how can one reasonably attempt a review of all that’s good in a glass? We’re not sure we have an answer, but we can direct your attention to some frothy fun from some of the brewers.

Here are a few of the rarer tastes. Plan your adventure strategically—some of these brews won’t last the day.

Jolly Pumpkin is bringing Cucurbitophobia, named for the affliction: Fear of Pumpkins. It’s the Pumpkin’s first collaboration with Henry of Monkish Brewing Company out of Los Angeles and it’s a sour ale—so popular! The beer is a barrel-aged gose brewed with blood orange zest and juice, black lava salt as well as a rainbow peppercorn blend. Black Lava salt you say? Blood Oranges and peppercorns? We’re afraid we might like it, a lot!

North Peak’s biggest release ever is Mellow Cherry Hibiscus, promising to be Northern Michigan brewed in a bottle. It embraces the lifestyle of slowing down and focusing on the beauty of this magical place. Brewed with Michigan cherries and hibiscus, this higher gravity ale has the sweet iconic flavors of the North. Mellow is fruity and sweet with a hint of tartness. Each sip of this big balanced beer will transport you to the wonders of Northern Michigan.

For your 30th birthday, did you commission a special ale? Well, Bell’s did, and they are bringing it: 30th Anniversary Ale. Dark chocolate and fruit in a stout designed to continue age well in the cellar—like any good 30-year-old.

And you can share the dreams of Larry Bell when you drink Quinannan Falls, a special lager that came to him in a dream. The company describes it as, “a dry-hopped lager that possesses a crisp, dry bitterness you would expect from a German pilsner, but the use of highly aromatic Simcoe hops, from the Pacific Northwest, evoke the fragrant pine forests that inspired this beer.” We think the label reminds us of Taquamenon Falls—as dreamy and mystical a place as any.

The Best New Brewery in all of Michigan, according to MLive, Stormcloud Brewing will bring Confederate Gold, among many others. It’s a delicious Belgian Blonde Ale fermented with peaches and pecans. Confederate Gold derives its name from the story of a lost railroad boxcar containing $2 million in stolen Confederate gold bullion. Supposedly sunken in the depths of Lake Michigan off the coast of Frankfort while being shipped by freighter during a storm, the tale of the Confederate Gold came from a prominent Muskegon banker who confessed of the gold’s whereabouts on his deathbed in 1921. Worth more than $126 million at today’s gold prices, Frankfort’s Confederate Gold has raised the interest of treasure hunters nationwide. Golden glasses have our interest indeed.

All the cool kids seem to be drinking sours. So Ore Dock is bringing three of them! Baby Blue Sedan, Mango Zee Tango and In Excess. The brewery shared a full explanation about why sours are finicky, and we recommend you stop by their tent to get it. In short, a sour can take 1-3 years of brew time. Wow! For Ore Dock, a smaller brewery from the Upper Peninsula, that’s a long time to wait to tap a keg and they disappear quickly—cool kids are drinking a lot of these, remember? So the Microbrew & Music Fest is the swan song for Mango Zee Tango, a deliciously complex and refreshingly sour ale. The last keg. Tapped out. Read: No more Mango Zee Tango after the Fest!

Ore Dock is also bringing In Excess and describes it as the rarest of its offerings. They start with water from Lake Superior, aptly described as the world’s biggest bowl of melted snow. Aged for 2 years, this beer is cask conditioned and hand-pulled through a beer engine, a 17th century process. No forced carbonation, you ask? Nope, a taste of old.

You might want to try Short’s Psychedelic Cat Grass early in the day. Limited quantities were packaged, shipped and tapped on August 17, just after midnight. And it is already sold out in several places! Psychedelic Cat Grass is a triple dry hopped American India Pale Ale first brewed for HopCat. Aromas of pineapple, mango, and grapefruit accompany the brew’s slightly hazy, pale orange color and lasting white head. There are balanced flavors of tropical fruit and bitter hops with a dry finish.

Tequila Barrel Aged Occam’s Razor is an Imperial Cream Ale brewed with fresh ginger, blueberries, and lemon zest aged in Tequila barrels with brettanomyces. A beer named for a theory that espouses simpler answers, sure! Combining super food flavors like ginger and blueberries and marinating them in tequila notes sounds like simple pleasure to us.

If you only go to the Microbrew & Music Festival for the beer, you’ll have a great day. There are so many other great beer adventures there—we only just scratched the surface here. Get your tickets on MyNorthTickets.com … and if you’d like to avoid the lines at Will Call, pick up your wrist bands at our office under the yellow awning, 125 Park Street, downtown Traverse City.