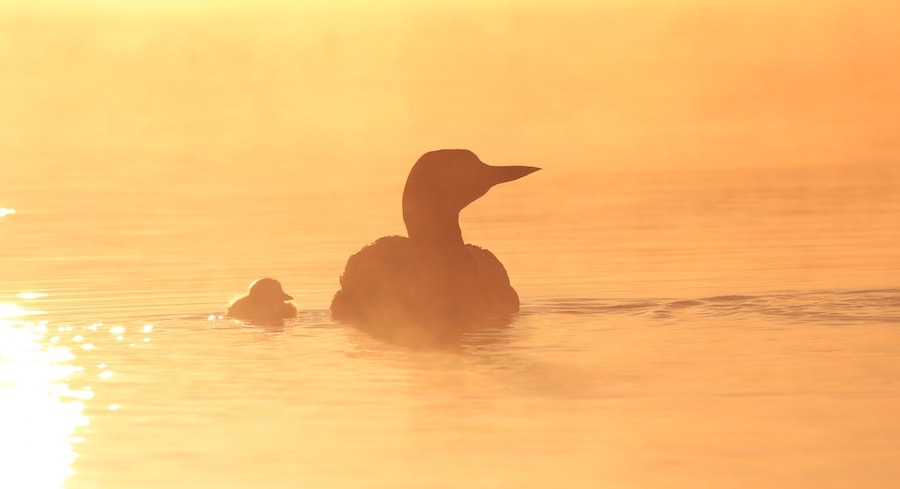 The Northern Michigan outdoors is shaped by the lakeshore, dunes, and wildlife that inhabit it. Join Traverse Magazine reader, Robert Musser, as he explores the history, current state, and future of Northern Michigan’s common loon—one fascinating example of the endless creatures that fill Northern Michigan with life and wonder.

– The Legacy of the Common Loon –

Approximately 65 million years ago, give or take, a mountainous asteroid struck the Chicxulub Basin on Mexico’s Yucatan Peninsula at a speed of 40,000 mph. Its six-mile-wide mass formed a crater 190 miles in diameter and displaced billions of tons of dust and debris into the atmosphere. The resulting lack of sunlight eventually destroyed most plants and 70 percent of existing animal life, including the dinosaurs. Scientists speculated that small burrowing mammals and birds survived because fur and feathers protected them from the resulting cold.

As many as 150 million years ago there lived the first birdlike creature, archaeopteryx. It was as much reptile as it was bird. It was also the model from which birds have developed through the eons. From unearthed fossils, scientists have come up with 1,700 species of ancient birds. Of these species, 850 are still living today, and one of them is the loon. It is determined to be the oldest of all living bird species, of which there are nearly 9,000 in existence today.

The common loon’s genus name, Gavia, is from Latin: aquatic bird. The species name, immer, is from the Latin word immergo, meaning to dive or submerge. In addition to the common loon, the family also consists of yellow-billed, red-throated, Pacific and Arctic loons. The common loon is the only species that nests in the Lower 48 states.

As long as mankind has existed, the loon has captured the interest and hearts of lakeside admirers. It surely deserves a closer look. 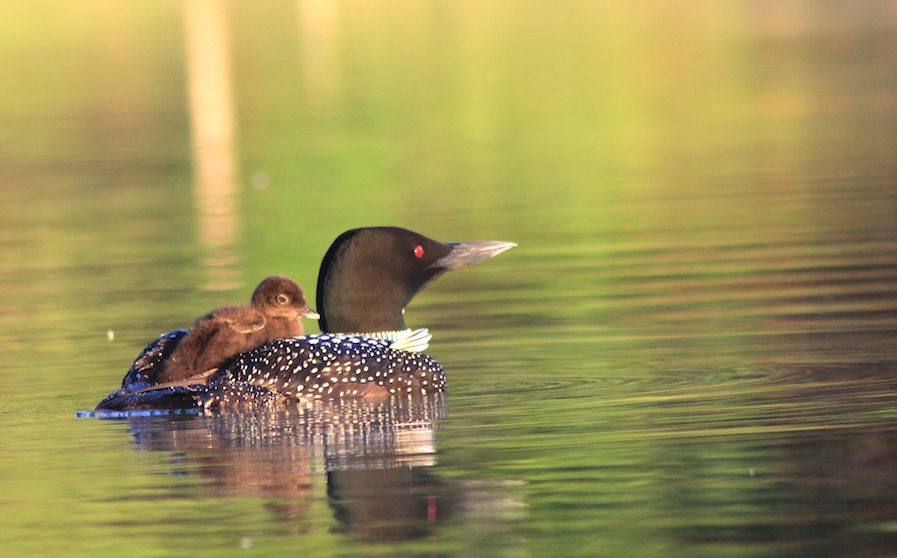 Adult loons have a five-foot wingspan, measure three feet from bill to outstretched feet, and weigh from five to 17 pounds. Chicks can quickly grow to five to eight pounds in three months. The loon life span can reach to 30 years.

While most birds have hollow bones that make flight easier, loons have solid bones, giving them a specific gravity closer to that of water. Their legs are postured far back near their tails, making swimming and diving easy, but walking virtually impossible. Thus, all nests are located at water’s edge or on floating debris (hummocks) farther out on the lake.

The family units we observe in the North disperse widely during winter. Mated pairs that have been together year after year may now be separated by hundreds of miles, wintering on entirely different stretches of ocean coastline, from Aleutian Islands south to California, or Newfoundland south to Florida and Texas. During winter loons spend the entire time at sea—eating, sleeping and, as days pass, molting.

Migration is a dangerous time. Since a loon can move on land only by pushing its belly along in a sliding motion, land can become a potential death trap. If for any reason a bird finds itself on solid ground, such as mistaking a wet parking lot for water, it becomes totally stranded and cannot survive without assistance.

Immature birds, however, spend several years at sea before migrating north for the first time. While at sea, the loon’s intake of water is aided by a set of salt glands located above the eyes. Excess salt is absorbed by the blood stream and transferred to these glands. The absorbed salt is then excreted into the nasal cavity and leaves the bill or nasal passage when it shakes its head.

After the loons’ flight north, nature allows mating pairs to again find each other via “site fidelity”—the pair returns to the same nesting place as in previous years. After the pair rebuilds their nest, the female lays two olive drab, spotted eggs. The incubation period is 30 days, and after hatching, the chicks spend up to two weeks riding the backs of the adults for safety, warmth and receipt of food. At six weeks the down is replaced by feathers, and the young slowly begin to dive for their own food. Adults have been recorded to dive up to 265 feet and fly up to 75 mph.

During and after nesting, loons must contend with a number of predators, including raccoons, skunks, minks, weasels, herring gulls and large turtles, as well as humans engaging in water activities near their nests. If the chicks are lost, for any cause, there is usually time to nest again. If the second clutch of eggs is lost, they birds may even try a third time. If this takes place around June, it is usually too late because not enough time remains for the young to learn to fly before freeze-up. 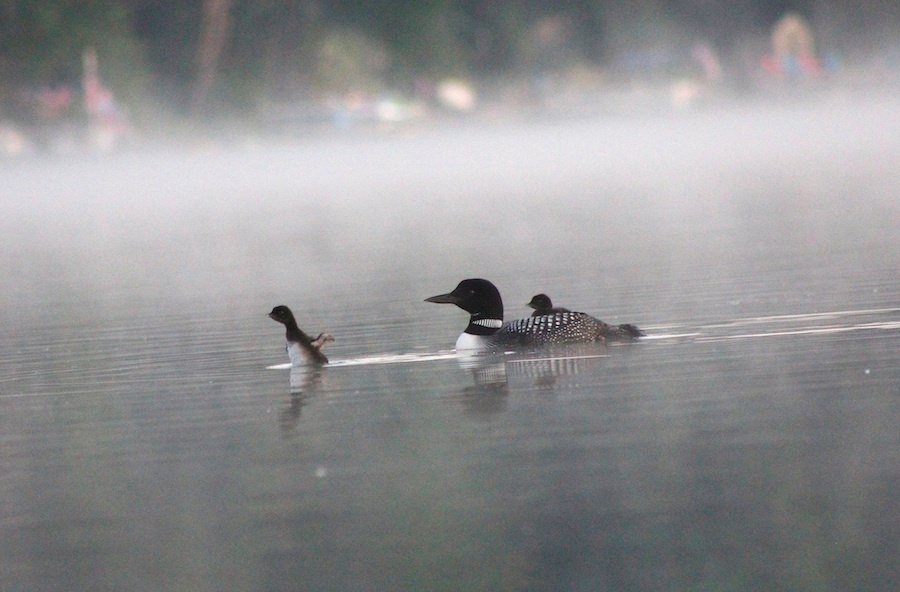 A great amount of energy is spent during the reproduction period, which requires the adults to offset the energy loss by eating more. Their diet consists of fish, crayfish, snails, leeches, frogs, salamanders, insects and aquatic plants.

With a well-developed sense of vision and hearing, loons use both visual displays and vocal calls to communicate. Scientists have confirmed that loons each have a unique, identifiable call. Loon toons fall into four categories: tremolo, yodel, wail and hoot. These calls carry messages of love and anxiety and are combined with various postures to convey other emotions as well.

By natural instinct, adults leave the autumn lakes and migrate thousands of miles to the sea. Juveniles, on the other hand, remain on the lakes for a brief time longer. The flocks, which have been forming for weeks, are magnetized by the open seas. All loons, motivated by the sum of experiences over millions of years, orient themselves for migration by using the earth’s magnetic fields, landmarks, prevailing winds or any combination, including the sun and stars.

How do we fathom a bird that has repeated the same yearly cycle 60 million times? The major issues that threaten the loon’s continued survival unfortunately cannot be fully resolved by artificial hummocks constructed by well meaning Loon Rangers, loon alert signs or bumper stickers. Loon preservationists cannot, by themselves, stop acid rain, chemical contamination or oil spills. Solution lies in major legislation efforts, which, in addition, await basic changes in our social values and priorities in the direction of responsible “Individual” environmental stewardship.

We as individuals are privileged to witness many of the great wildlife spectacles of the world. The excitement of observing the lofty loon does not lie in exotic settings but in understanding what we see. We enjoy nature most when we take time to study, understand, and preserve it. Loons continue to excite us because of what we have learned about these marvelous birds, about the natural forces, which shape them, and the forces of mankind that could eventually destroy them.

During your next encounter with loons, remember that they truly echo “the voice of the wilderness.”

“The Lord did well when he placed the loon on earth. With its majestic flight and mournful cry, it has stirred the imagination and soul of modern man, as well as the spirits of primitive tribes.”—Oliver Austin