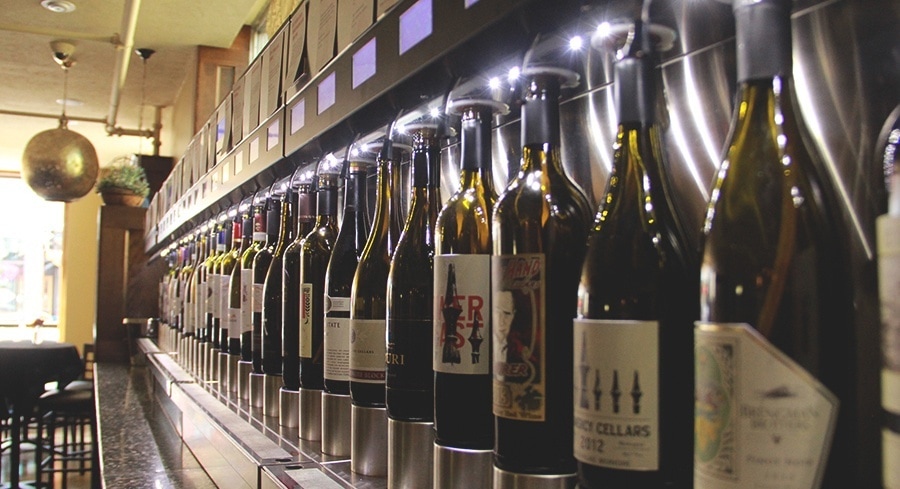 The newly opened Traverse City wine bar Olives and Wine is bringing a taste of the Middle East to Front Street. Serving wines from around the world including bottles from Lebanon, Israel, Argentina and France mixed in with local Northern Michigan wines and a rotating menu of Greek and Mediterranean dishes, the casual craft house fits in well with the evolving Traverse City food scene.

Owned by business and life partners Ari Mokdad and Chien Nowland, who is also charter boat captain of the Nauti-Cat, Olives and Wine is a labor of love. The idea for a wine bar started developing three and half years ago in Winterpark, Florida, where Ari was visiting a friend for her birthday. To celebrate, her friend took her to a wine bar in the area. “It was like a candy store for adults,” Ari jokes.

Fast forward to 2016. Ari was working as a marketing director while completing her master’s degree in writing at Wayne State University. “The job wasn’t fulfilling,” she says. “I wasn’t passionate about it.” In January, Ari and Chien went on vacation to Key West and stopped at the wine bar Ari had fallen in love with. The idea to open their own Traverse City wine bar developed on the car ride home. “We were throwing the idea around and the state of Michigan had literally just passed self-serve legislation.”

When they got back in town, Chien decided to call the owners of the Corner Loft which had a space available for rent. “They said we’d have to have a good idea because they were scheduled to sign a lease with someone that afternoon,” he says. They only had a few hours to throw together a presentation. The name Olives and Wine was taken from a food blog Ari was working on with her friend Jessica Korson. The logo was only a mockup. The meeting went well, though, and the pair was given three days to come up with a business plan. “It was crazy,” Ari says. “I was still in school so Chien was driving me back to class from Traverse. I was writing the business plan in the car. I had unfinished homework. But we pulled it off.” 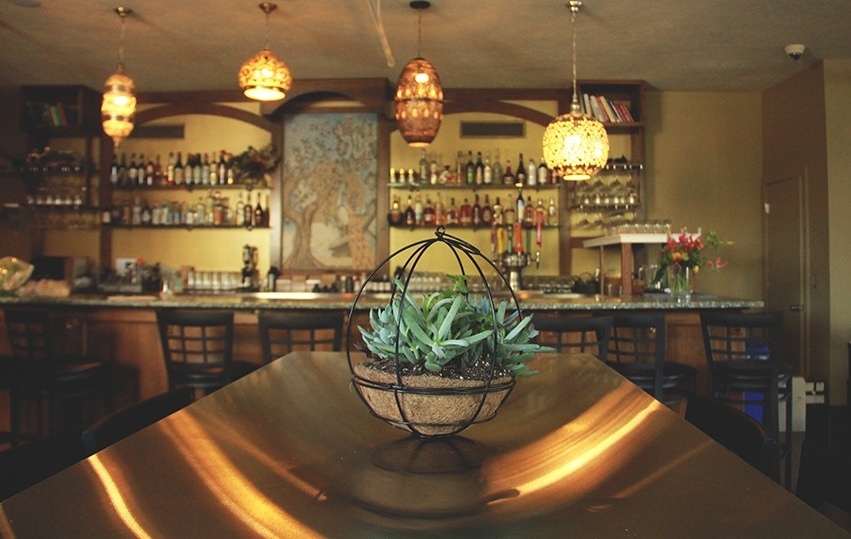 In just six months, the space, which used to be a bank and later a television studio, was completely remodeled. An old bank vault is now a lounge for guests, the light fixtures were handmade in Egypt and the bar is made from crushed wine bottles. During the remodel, builders found hundreds of deposit slips from the 1930s and 40s in the walls.

Ari found a Lebanese artist on Etsy to create two mosaics for the tasting room. “When I reached out to him, he recognized my last name and asked if I had any family in the area,” Ari says. “It turns out, my grandma was his schoolteacher in grades 1 through 5.”

Ari’s father’s family is from Lebanon and her mother’s family comes from France. “I’m the first generation here,” she says. “I grew up sharing a meal around the dinner table. It was a moment to catch up, tell stories, laugh, have a glass of wine. These were some of the best times I had growing up and something I missed up here.” Keeping with tradition, the grape leaves recipe served at Olives and Wine is her family’s recipe, and family heirlooms including a tea set and camel figurine are displayed behind the bar. “This area is similar to where my dad grew up on the water. My dad says it feels like home.” 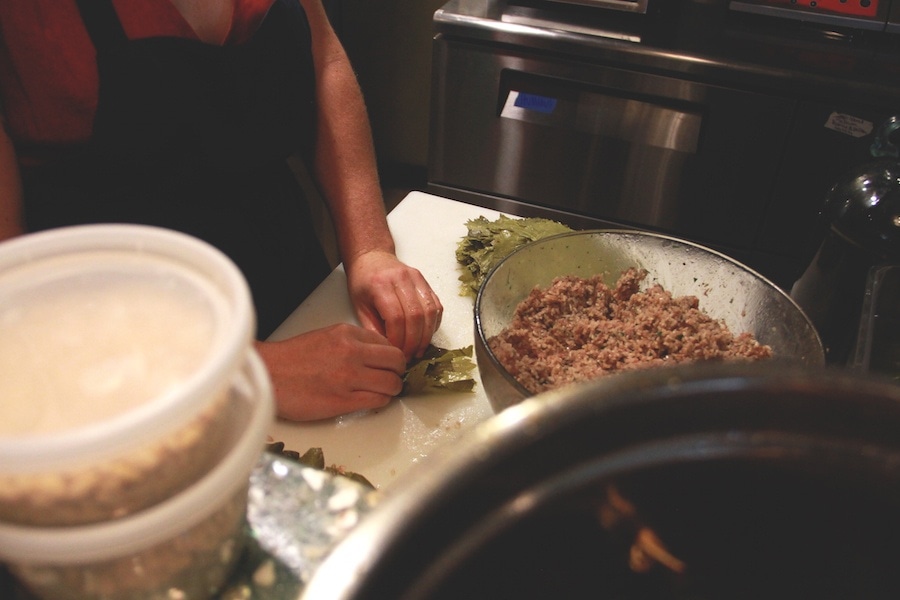 In the kitchen, close friend Jessica Korson is creating dishes using local, organic ingredients, most of which are handpicked from the Sara Hardy Farmers Market on Wednesdays and Saturdays. Other ingredients come from the rooftop garden where organic strawberries, lavender, mint, peppers, eggplant, tomatoes, dill, chives and more are growing. In the winter, produce will be coming in from Forest Garden Farm in Maple City where farm manager Sarah Alexander is working on a restaurant garden for Olives and Wine.

“Everything is fresh in the kitchen,” Jessica says. “The only things frozen are the lamb bones, which only come that way, and a shaved ice dessert.”

In addition to a full bar, and craft beer and cider, Olives and Wine has a wine-dispensing machine offering a selection of 56 bottles of wine. Customers can select a 1-ounce, 2.5-ounce or 5-ounce serving depending if they’d like to sample or enjoy a glass. Each bottle is accompanied by tasting notes and prices so customers can try new wines or old favorites.

“The machine gives people the opportunity to sample high-end wine which they may not typically order a bottle of unless it’s a very special occasion or sharing with a group because of the price,” Ari says.

In the future, Ari hopes to also offer a wine locker program for people to store their personal bottles of wine at Olives and Wine in a climate-controlled setting and to expand the business into the basement, which would become a performance art venue for poetry, jazz, literary readings and more. Also keep an eye out for upcoming special events at the bar such as The Great Gatsby Party this Saturday, August 6. 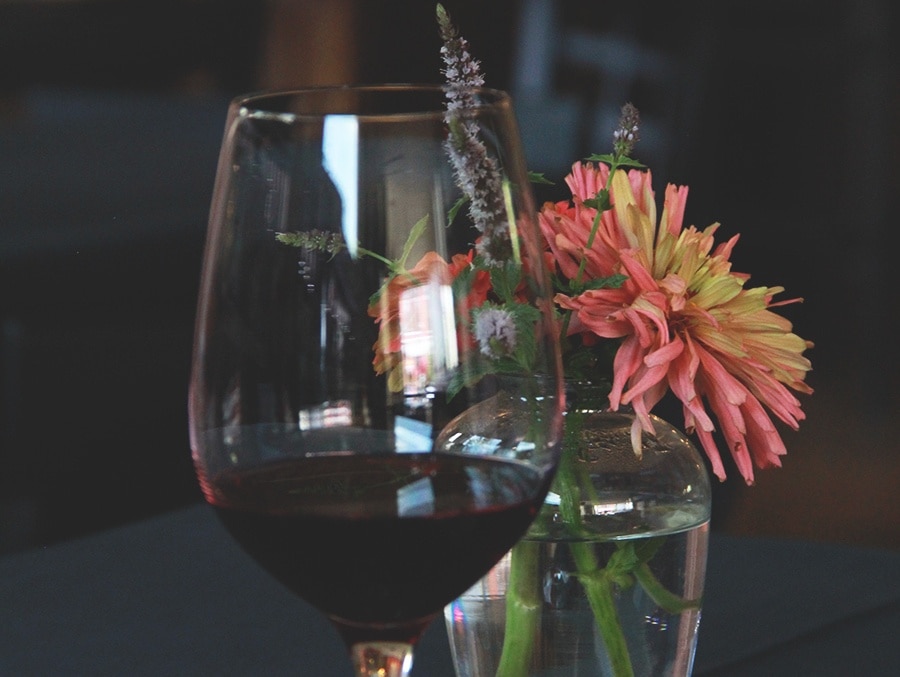