Our National Parks celebrate their centennial this year. In honor of these stunning natural Northern Michigan attractions, three writers share thoughts on these cherished realms. Here, Aaron Peterson takes us on an adventure across Isle Royale. Travel tips included.

There Will Be Howls

Isle Royale—the name alone gives me chills. Just say it a few times, slowly. Close your eyes and see the words. To me they are as refreshing as the ice-cold lake water surrounding it and as complex as a fat red thimbleberry plucked along the trail, rolled over the tongue and crushed against the roof of the mouth. A tickle of sweet chased with a SLAP of tart to remind you nothing here is easy.

It’s like that, see, it does its own thing and doesn’t care if you like it. Sure it’s still technically Michigan, but this is the gnarled 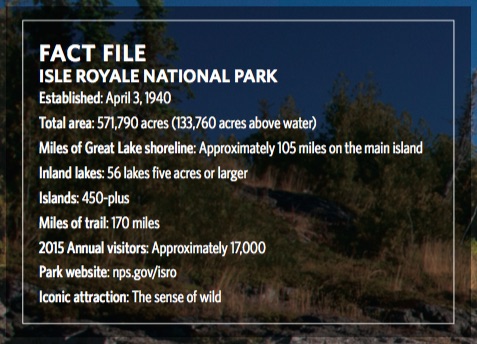 bastard cousin to the sunnier, sandier poster children smiling from our billboards and TV commercials. If this were a family reunion Isle Royale would throw rocks at those kids, then grab the Keweenaw and run off to hide in the woods.

Let me spend as much time as possible along the cold rocky coast of Lake Superior. Keep your beaches, your warmth, your comfort, I ache for fog and loon cry. In dreams I swim with chattering otters, catch fat brook trout in my teeth, wag a tail—and howl just because I can.

Isle Royale is one of the few places in the Midwest where you’re not a crazy person for saying things like that. Here the people you meet, if you meet anyone at all, are probably thinking the same thing. They just give you a knowing smile, thimbleberry seeds in their teeth, and tell you that when seen from space, Lake Superior is a big blue wolf’s head with Isle Royale its green unblinking eye.

To that I simply say, “OW-WOOOOOO”! 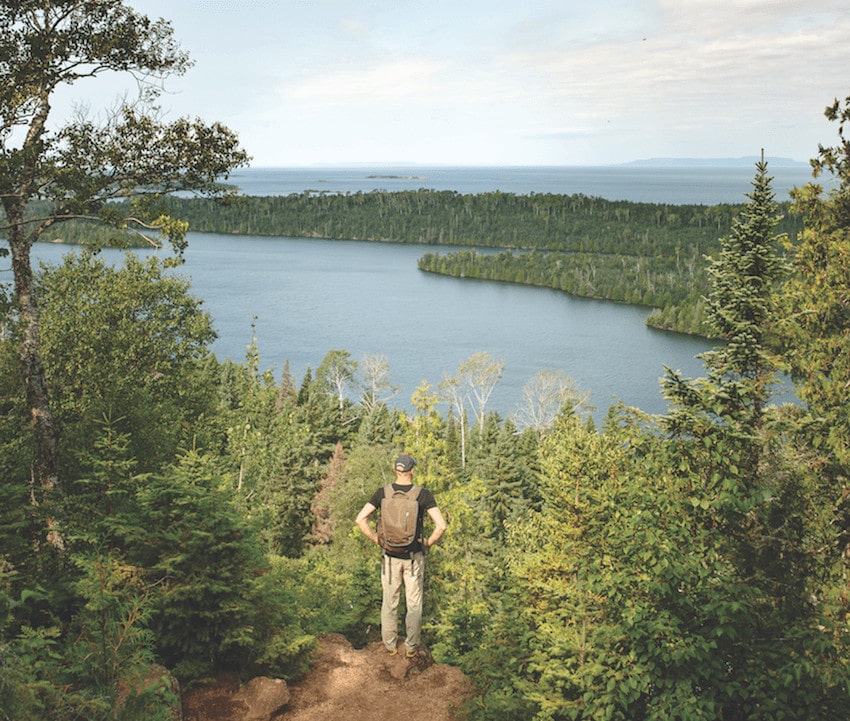 It’s the middle of July, 60 degrees and sunny, and I’m standing on a dead man. He was just a boy really, judging by the dates on the silvered cedar grave marker. It bears an Irish name; born of island and to island he returned. Ireland and Isle Royale, a pair of lonely floating bookends to a half-written life.

I only paused here to get out of the kayak and stretch my legs on this small barrier island, one of 400-some in the park, just stabs of black rock slashed with orange lichens and sprinkled with spruce. I’ve been kayaking and hiking the island park for over a week seeking the wolves it’s become known for. They originally crossed from the mainland on an ice bridge in the 1940s. See, it’s a wolf thing to lope far and wide, just letting your hunger and nose lead the way. But the genetics of an island species can be cruel, and it’s a lonely time to be an Isle Royale wolf. Only a few are left. The humans are talking about the situation, but in the meantime nature is doing nature things and wolves are left gnawing on the short straw.

For nine days I’ve prowled from dawn until dusk, slipped silently along quiet bays, and smashed through whitecaps to get to places where I’ve seen scat and tracks on previous trips. I’ve sat until dark on rocky spines straining my eyes in the fading light for a glimpse of something—anything canine. Selfishly, I’d like to catch one last howl on the wind, or spy a furry blur among the brush. But it seems the island holds its treasure tightly these days.

I wonder if my dead guy had similar thoughts, as he wrested copper from the mines that still pock the island. Hungry and hopeful he crossed an entire ocean, half a continent, and then this angry inland sea only to find the brutal end to his short, hard life. And he wasn’t alone, a quick check of my map and guidebook reveals this to be Cemetery Island. It’s littered with the graves of early miners stabbed and clubbed during a drunken brawl in the mid 1800s. Forty men died. I imagine there was some howling. 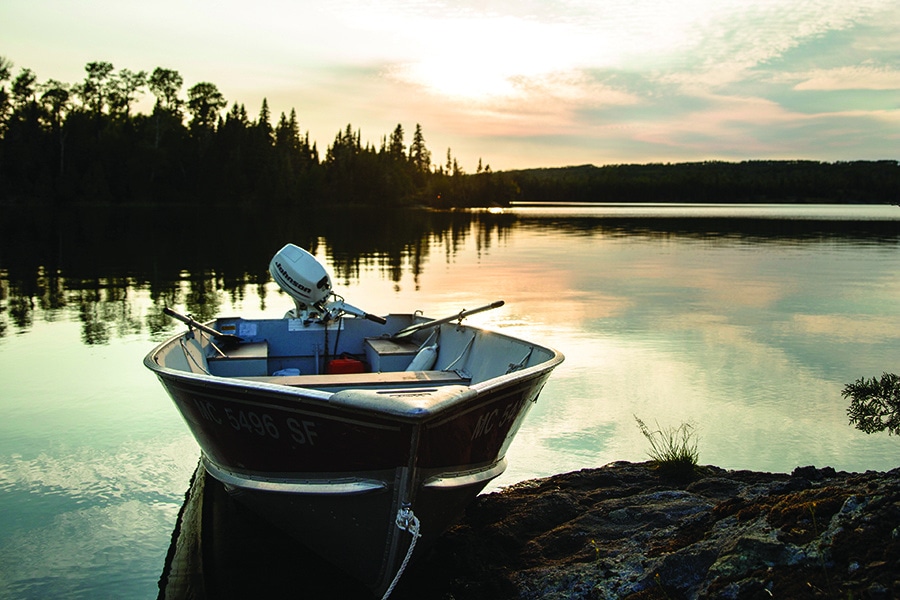 But today Cemetery Island is peaceful, the air is spiced with cedar and hums with dragonflies. A crisp lake breeze stirs moss-bearded branches. I step gingerly through ankle-deep duff, avoiding the graves, eager to get back to the kayak and leave this heavy place. On an island known for predators, it’s disconcerting to find yourself among the bones of the prey.

I’m paddling back to the ferry dock. It’s time to admit the trip is over. Time to spit out the brook trout and swallow the remaining howls. But even if I never see an Isle Royale wolf again, this will always be a wolf place in spirit. It will probably always be one of the least visited national parks. A place for the few and the fringe, the outliers who trust their gut and follow their nose over the horizon.

And to that I simply say “Ow-wooo.” Access one of the Lower 48’s most remote national parks. Check websites for detailed pricing and schedule information, but for now, here are some basics:

Paddle camp: Launch from Rock Harbor and paddle northeast along the shore and round Blake Point, the island’s northeast tip. Take your time and soak up the rocky coast and multitude of enchanting barrier islands. The multiple paddle-only campsites are lightly used, so tailor your mileage to skills and mood. If you can get to Belle Isle campsite, do it. Wetsuit or dry-suit strongly recommended.

Backpack: Isle Royale shines most spectacularly along the shore, so if limited for time, aim for trails that hug the coast, or, if hiking inland, drop to the shore for your night’s camp. The trail heading southwest from Rock Harbor to Moskey Basin delivers lovely craggy coast, as does the Scoville Point trail, leading northeast from Rock Harbor.

This article was originally published in the July 2016 issue of Traverse, Northern Michigan’s Magazine.
Subscribe here!