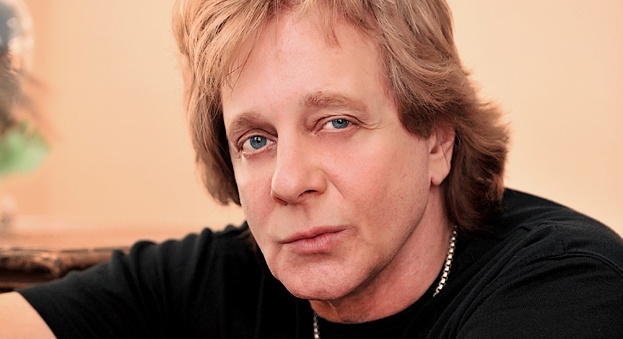 Irrepressible. That may be the best single word to describe Eddie Money. The singer and songwriter has been on top of the world, with chart-topping singles and albums. He’s lived the highs and lows of the rock and roll lifestyle, appearing on sitcoms and commercials, and battling addictions and being dropped by his record label. Through it all he’s maintained his sense of humor and thankfulness. “The big guy upstairs has been very good to me,” he said during a phone interview.

In the decades since cop-to-be Eddie Mahoney gave up the badge for the stage, he’s had hits around the world, but the Great Lakes State has always been a favorite stomping ground. “I probably have more fans in Michigan than anywhere else,” he said. Part of that is based on the fact he’s typically opened the season at DTE Energy Music Theater, a.k.a. Pine Knob. It also has to do with his style of music, a soulful blend of blue-collar stylings and pop hooks, an approach similar to a couple of his idols, Mitch Ryder and Bob Seger.

His connection with the region goes deeper than that, however. “I’ve got some friends in Traverse City. People don’t know how beautiful it is up there. I’ve been up there skiing. I have so many friends up there. My phone has been ringing off the hook.”

He even remembers specific stops along the way, including a show in East Jordan some 20 years ago. “Yeah, I remember that. I had to bail a friend out of jail who got a DUI that night. His wife was really upset with me,” said Money with a laugh. That story is pretty much standard operating fare with Money. His own past substance abuse problems notwithstanding, he tries to make every show a party for his fans. “I think an entertainer’s job in life is to make people feel good,” he said.

Asked what he’s currently listening to, he takes the conversation in a surprising direction, mentioning that he’s interested in the music he grew up listening to his parents play. “The Ink Spots, Hoagy Carmichael, Judy Garland.” Then he ups the ante. “I’m doing a 30s record,” he said, mentioning song titles such as “You Belong to Me,” “Mr. Saturday Night,” and “You Always Hurt the One You Love,” whereupon he starts singing the lyrics.

“Look at Rod Stewart,” he continued, referencing the chart-topping rocker who reinvigorated his career by recording five albums of the Great American Songbook, starting in 2002. “My father- and mother-in-law never knew who he was. Now they love him. I figured I’d reach a lot of people.”

The son of a Brooklyn cop, Eddie Mahoney sang in the bars at night while attending the police academy. The lure of music grew stronger than following in his father’s, grandfather’s, and brother’s footsteps, and after moving to the Bay area, rock impresario Bill Graham took him under his wing. The New York born and bred musician came out of the gates strong: His eponymous 1977 album featured the hit singles “Two Tickets to Paradise” and “Baby Hold On” and today is approaching triple-platinum status. Its immediate follow-ups weren’t as successful, but the 1982 disc No Control again featured two mega-hits, “Shakin’” and “Think I’m in Love.”

Mitch Ryder, Bob Seger, The Beatles, the Rascals, the Animals, the Monkees, the Turtles

Money’s 1986 album Can’t Hold Back was not only a comeback for him, but for guest vocalist Ronnie Spector, who duetted with him on “Take Me Home Tonight.” The album also featured the hit “I Wanna Go Back.” As his audience grayed, his subsequent recordings met with less success, with just two more chart hits, “Walk on Water” and “I’ll Get By.” He’s recorded sporadically since the late 90s, but his music lives on. In addition to classic rock radio, Money’s songs have appeared in dozens of movies and television shows, and have recently been included in video games like “Grand Theft Auto” and “Guitar Hero.”

Money still maintains an active touring schedule. His band often includes some of his five children, including sons Dez and Julian and daughter Jesse. He also is involved with various groups benefiting veterans, including Pets for Vets, a national nonprofit with chapters across the United States. It rescues shelter pets and then trains and pairs them with American veterans who suffer from post-traumatic stress disorder or traumatic brain injuries and could benefit from having a companion animal. “I do a lot for vets. My heart goes out to them. Where would we be without them?” he asks. A portion of his T-shirt money goes to veterans’ organizations.

“On No Control, Eddie Money found the perfect middle ground between AOR production and pop hooks, with the singles “Think I’m In Love” and “Shakin'” sending the rocker back into platinum territory.” – The All Music Guide

“In concert, Money’s distinct voice carries just a touch more rasp than it did in his heyday, but he’s still hitting all the notes, and fans keep coming back.” – CantonRep.com

Tickets start at $20. Go to OdawaCasino.com.