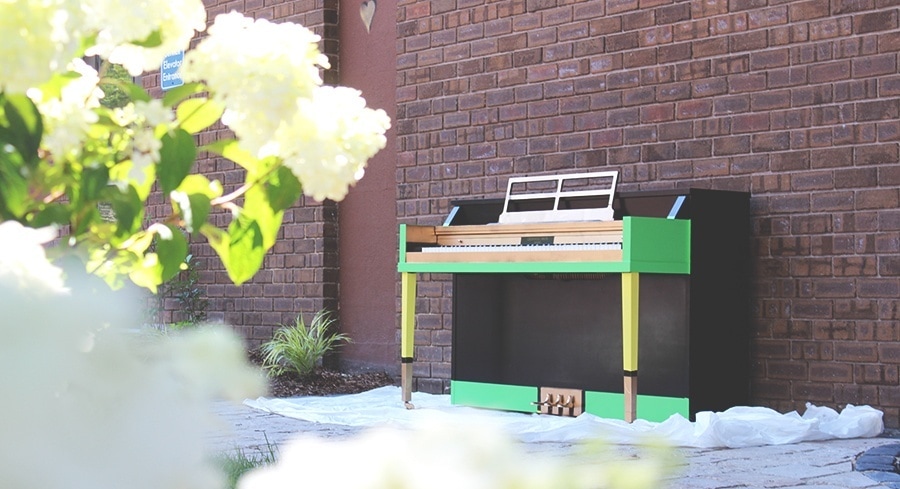 At any given moment, the streets of downtown Traverse City are alive with people bustling in and out of shops, laughing from restaurant patios, and loving all that a Northern Michigan summer offers. If you should find yourself in downtown Traverse City this Thursday or any summer day thereafter, you’ll find the flurry of the city set to a new sort of soundtrack. On the east side of the building located at 250 E. Front Street, is the new home for the first-ever Traverse City street piano.

The brainchild of Jay and Heather Harrington, Traverse City’s new street piano aims toward fostering and emphasizing the incredible culture the city already possesses. “This town is bursting with creativity, and our hope is that the piano will allow people to express and share their musical talents (or lack thereof!) with the community,” Jay says. It’s not uncommon to happen upon a trumpeter or guitarist somewhere along Front Street, but the presence of the piano will allow even the most under-equipped patrons to add to the city’s soundscape.

The unveiling of the street piano will take place this Thursday, July 21 from 6 to 8 p.m. on the east side of the Chase Bank building at the corner of Front and Park Streets. The evening will showcase Heather Harrington’s hard work and thought in designing and painting the piano, as well as several local musical talents who are scheduled to play the piano throughout its inaugural evening. Visitors will be able to snag free ice cream at the event, as long as they arrive before it’s been eaten or has melted.

Thursday’s unveiling is sure to make for a wonderful evening filled with incredible entertainment, but it’s only the start of a full season of the same. “So while we’re excited for Thursday’s event,” Jay concludes, “we’re even more excited for it to be over because that’s when the piano gets turned over to the community.”

Stop by Thursday for the Traverse City street piano unveiling, then come back often to play a tune.