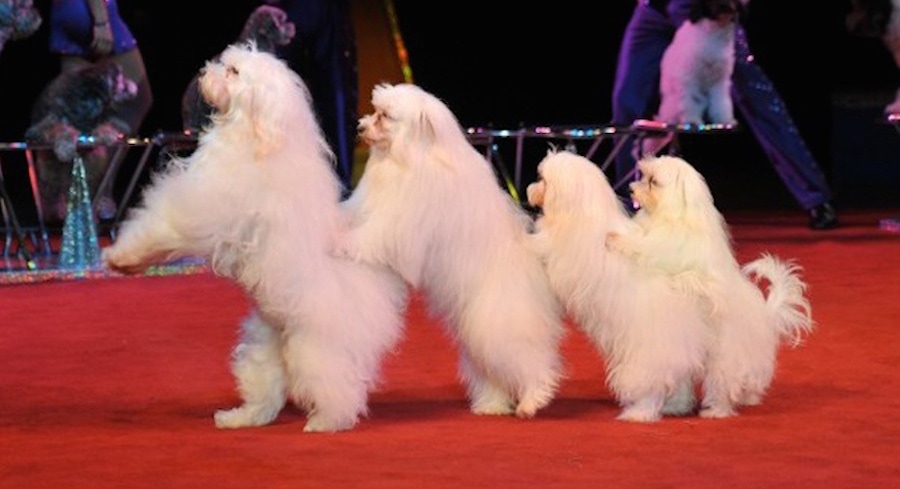 This week in Williamsburg, outside of Traverse City, a not-so-common act will perform for families from across the state. Since the beginning, the Olates and their dogs have been pushing envelopes when it comes to circus performances and continually creating new tricks to wow audiences. The talented Olate Dogs even earned them the top spot on America’s Got Talent. Don’t miss out on an incredible opportunity to witness them work their magic so close to home at a Northern Michigan event!

Richard Olate grew up in Santiago, Chile. He rescued a dog from the street and started teaching it tricks. Soon he adopted two more dogs and trained them as well. By age 12, he was supporting his family with a dog act, performing in schools and small circuses in his native land. Richard’s brother Jose joined the act and the duo caught the attention of circus promoters. In 1989, the two brought their act to the United States.

Richard met and fell in love with fellow circus performer Rebecca Smith, a human cannonball, and they had three children. Two moved to their father’s homeland, but youngest son Nicholas, who grew up around the dogs, became part of the act at an early age and was featured by age 15. Rebecca eventually moved behind the scenes, while Jose left the act in 2012. He was succeeded a year later by his youngest son Juan, though these days it’s father and son Richard and Nicholas who are spotlighted – along with the dogs.

The show features the pups jumping rope, going down slides, riding scooters, a doggy conga line and a pooch that does back flips. Up to 10 of their 22 dogs perform during each show.

Dog trick act featuring father-and-son trainers Richard and Nicholas Olate, who perform with a troupe of dogs rescued from shelters.

A talent scout spotted the Olates and took them to California, where they worked in commercials and films. They appeared in the Big Apple Circus and Ringling Bros and Barnum & Bailey Circus, as well as on TV shows such as The Today Show, The Tonight Show and Live! With Regis and Kelly. Most famously, Olate Dogs appeared on and won the 2012 season of America’s Got Talent.

Since then, the dogs have performed across the U.S. in theaters, at fairs and in films, as well as appearing at halftime of game two of the recent NBA Finals. Interestingly, the Olates use rescue dogs almost exclusively in their act, and they train by having the dogs imitate their human trainers – no treats here! The Olates use physical and verbal cues to let the dogs know which trick to do. Most of their dogs are poodle mixes, as poodles are among the most intelligent dogs and have a light frame which doesn’t put too much stress on their joints, a must given to the jumping and tricks they do.

“It is pure love on stage. You make me so happy.” – America’s Got Talent judge Sharon Osbourne

“There’s no reason at all not to rescue a dog instead of getting it from the store. Every time we need a new dog, we go to the shelters and rescue a new one.” – Nicholas Olate

General admission tickets cost $10-$15. VIP tickets, which include a meet and greet with the Olate Dogs, cost $30. Go to MyNorthTickets.com.