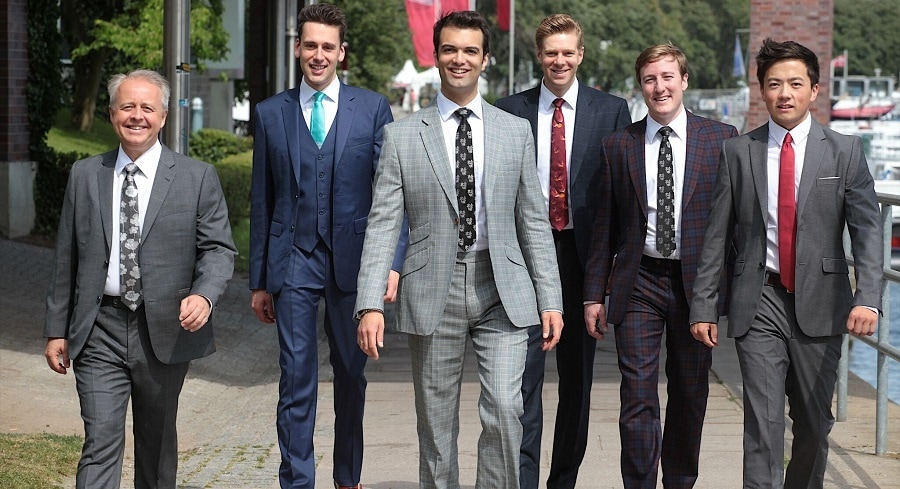 The King’s Singers is a British a capella group that has been performing since the 1960s. They continue their decades-long tradition of music-making with a host global performances, including a stop right here in Interlochen July 11.

The King’s Singers, an a capella sextet, has looked forward and backward for nearly half a century.

The group returns to Interlochen Monday for a program they promise will surprise, and hopefully delight. “At least a quarter of the show is fluid,” said bass Jonathan “Johnny” Howard in a Skype chat just before the group flew to the U.S. While the group often breaks down its shows into a “serious” first half, with traditional classical choral music, and then a “fun” second half with tunes familiar from the pop charts of the last 40 or 50 years, Howard said they sometimes like to mix it up even more. “Maybe we’ll juxtapose Renaissance music and pop, seguing from Tallis to Prince.”

Howard said the opportunity to change the show up nightly is important for the group and for its audience. He and his fellow singers plan a set list in advance, but are flexible enough to make changes. “We have discussions with the people there (at a venue), and ask ‘What will you like?’ Then you see a huge contingent of 10-year-olds,” he said. So they immediately add some music kids will be familiar with. “Katy Perry just did a 96-show tour where every night was the same. It must have been really boring by number 94.”

It’s also easier for them to make modifications to their set, since they don’t have to worry about sequenced backup music or a computerized light show. “As a presenter, it must be easy. Just turn the lights on. Maybe we need some music stands,” he said with a laugh.

The laughter comes easily to Howard, and to the group as a whole. They take their music seriously. They have to, in order to make the exacting blend of pitch and rhythm work. Yet the six members of the group seem never to take themselves too seriously, bantering with the audience and one another. That has been a large part of the appeal for the 48 years the King’s Singers has been in existence. And they’re already looking ahead. “2018 will be our 50th anniversary,” noted Howard. “We’ve got some projects lined up. What music of today do we want to be singing? We don’t have to be limited.”

One person who won’t be in the group then is countertenor David Hurley. He’s the last link with the group’s origins, as he performed with founding members Alastair Hume and Simon Carrington when he joined in 1990. They left thee years later, and this fall Hurley is retiring from the group after more than a quarter century of service. The group has already enlisted the services of King’s Choral Scholar Pat Dunachie to replace him as first counter-tenor. Howard said that will make him the third-longest serving member of the group, as he joined in 2010. “I’d been out of university for a year and was working in advertising,” he said, quite a different experience than any of his predecessors. “I’m unique in that I wasn’t a boy chorister. I went to German international school, studying violin, viola and piano. I sang in a choir at 15 and liked it, but I saw it as more of a hobby.”

Howard said the ability of the group to continue while bringing in new members is due to its devotion to the music. “The group lives by its ethos rather than by its membership,” he said. “It’s a classical background driven by the desire to make a perfect sound, balanced polyphony and harmony.” Howard said that is guided primarily by two factors: One is they don’t look for standout voices, but instead voices which can seamlessly blend with one another for what he calls “the greater good.” The other is that the group has always wanted to perform more than one type of music, combining everything from Renaissance to barbershop to jazz to pop, in one concert. “What is unique is we combine all styles, from Renaissance to music of the present day,” said Howard.

The six-piece male a capella group the King’s Singers

The original group formed in 1968 by six choral scholars from King’s College in Cambridge, England. In its early years, as personnel changed, the group included one of three women. The membership solidified in 1969. When the last two original members, Alastair Hume and Simon Carrington, left in 1993, there was discussion of disbanding the group. Ultimately, it soldiered on.

The “serious” side of the King’s Singers shows in its performances of madrigals, folk songs, and commissioned pieces. On the lighter side, the group performs music by everyone from the Beatles to Billy Joel to Queen, as well as music from the Great American Songbook by such composers as Harold Arlen, Irving Berlin and George Gershwin. They often perform sacred songs and spirituals as well. Much of their music is arranged by former members Philip Lawson and Bob Chicott. In the ’70s and ’80s, the group was frequently featured on The Tonight Show with Johnny Carson.

“The usual repertoire for countertenors is renaissance and baroque music, plus a bit of Britten opera and a few modern works. In the King’s Singers I regularly sing romantic music, jazz, folk, pop and loads of contemporary music. Performing and recording some great jazz standards with the legendary George Shearing was one of the thrills of my life, as was singing The Star-Spangled Banner before a Mets baseball game at New York’s Shea Stadium.” – David Hurley, countertenor

“The King’s Singers delighted the audience with favorite old American classics that impressed listeners with their impeccable blend and creative vocal artistry. The group received a standing ovation and performed two encores at the end of the concert.” – Pensacola Christian College online

Corson Auditorium at Interlochen Center for the Arts

Tickets are $34. Go to Tickets.Interlochen.org.

Photo(s) by The King's Singers