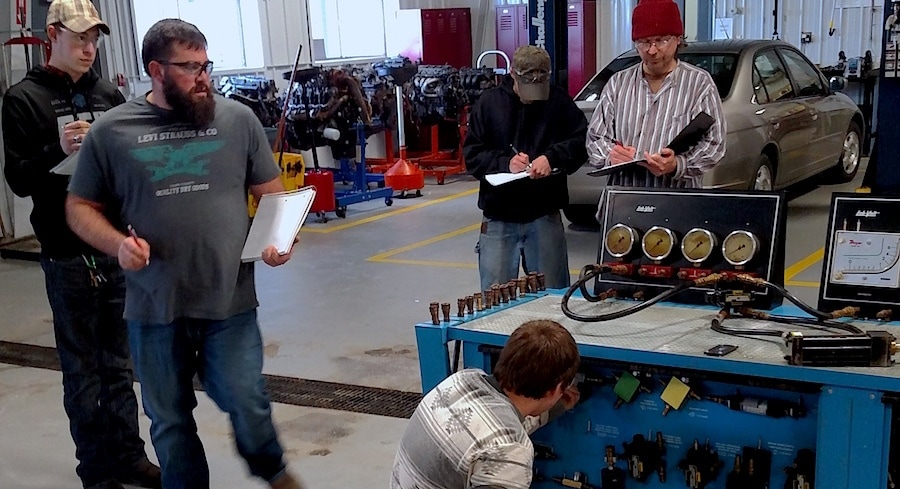 Imagine getting your schooling paid for, plus extra cash, and then graduating with a guaranteed job. For the students enrolled in the MAT2 program at Baker College of Cadillac, there’s no need to imagine. The program offers exactly that: a full ride scholarship, a $200 weekly stipend, and at least two years of employment with a local company. The only downside, according to those in charge of the program, is finding enough interested students.

“We should have a line out the door,” says Josh Fenner, who coordinates the program for Baker. “Ironically we are having a hard time finding students.” That’s despite the fact each participant receives $200 a week to cover personal expenses while attending classes at Baker, plus an hourly wage that will increase annually at the sponsoring company.

Fenner says the program will help to fill a gap in the skilled trades. Due to the recession of 2006-2008, many skilled workers left the state; many of those who stuck around are now at an age where they can retire. That’s a double hit, just as the need for such workers is growing with the state recovering from the recession.

Initiated by Governor Snyder as a way to train skilled workers for construction and manufacturing, the MAT2 (Michigan Advanced Technician Training) program provides full scholarship funds for the students, as well as a stipend. The first year they follow a six-week schedule of four weeks in school, followed by two weeks working. The second year the split is three weeks each, and the third year they spend four weeks working and two in the classroom. It is based on the German model of apprenticeship, which blends a traditional classroom setting with on-the-job training.

“It’s a unique program,” says Mark Lagerwey, Dean of Business and Technology at Baker College. Lagerwey says the sponsoring companies see such a need for skilled trades workers they are willing to spend the money for their schooling as well as guaranteeing them a job for two years.

While Lagerwey and Fenner both wish they had more students, they also note that bringing sponsors on board isn’t always easy. “We sit down with the human resources people and explain they are spending money regardless (to train new workers). Then they leave. This way they pre-screen (applicants) and control them for a couple years.”

It isn’t inexpensive. Lagerwey said the total cost for three years of schooling and the weekly stipend totals around $65,000 for the company. But at the end of that time, they have an employee with an Associate’s degree, trained in the skills the company will need, and they are guaranteed to stay with the company for at least two years. If the student leaves the program at any time before the end of the five years, he or she has to pay back the money the company invested.

The retention rate for the program is just under 90 percent. Baker launched its first cohort last year. Of the original 17 enrollees, 15 are still on board. Baker is one of a handful of community colleges in the state with the program, and the only one in Northern Michigan. Others are Henry Ford, Oakland, Macomb and Mott.

The field of study includes electronics, hydraulics, robotics, and pneumatics. A mechatronics technician supports engineers by maintaining manufacturing machines and related equipment, including repairing, testing and making minor modifications to them.

Among the companies in the program are Rexair, BorgWarner, Avon Automotive, Avon Protection, CCI, and Rec Boat Holdings in Cadillac; Skilled Manufacturing in Traverse City; and Kalkaska Screw. New this year will be Hutchinson in Cadillac, and Lagerwey says he is talking with other firms across the region.

He is hopeful the program will continue to grow as both students and sponsoring firms see its benefits. “It’s a lot of work to get the program off the ground,” he says. “As it gets legs I think it will take off.”

Students interested in the MAT2 program must have a high school diploma or GED certificate. Fill out an application through MEDC at www.mitalent.org/mat2.

Photo(s) by Baker College of Cadillac