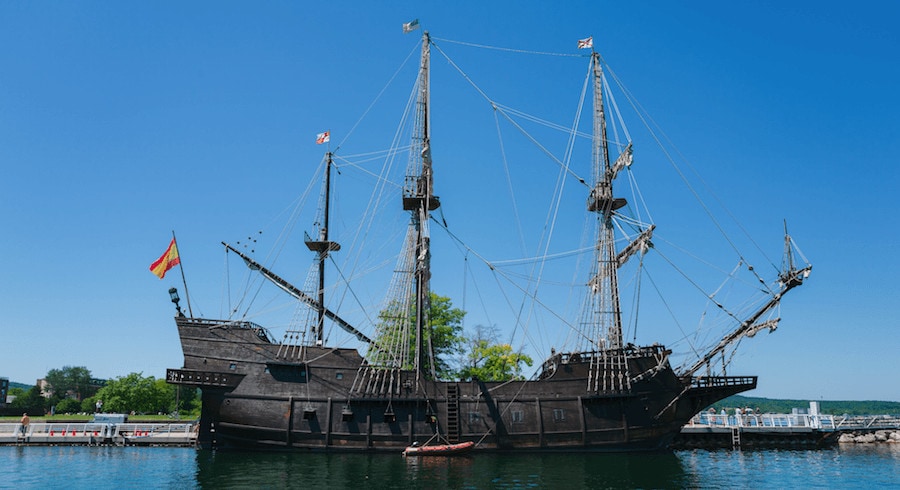 Traverse City: The Maritime Heritage Alliance of Traverse City (MHA) is privileged to announce the arrival of El Galeon Andalucia from St. Augustine, Florida. El Galeon will dock at Clinch Park’s west wall on Thursday, July 21 and be open for tours on Friday, Saturday, Sunday, and Monday from 10 a.m. to 7 p.m. She will set sail Tuesday for Chicago as part of the Tall Ships Challenge Great Lakes 2016.

All photos by Taylor Brown

Entrance donations are $10 for adults, $5 for kids ages 5-12, and free for children under 5. El Galeon is here in Traverse City through the invitation of MHA and the support of the City of Traverse City and Clinch Park Marina.

El Galeon Andalucia (as referred to in Spanish) is a 170 foot, 495 ton, authentic wooden replica of a galleon that was part of Spain’s West Indies fleet. With information about 16th-century European sailing techniques and technology, as well as important historical exhibits, El Galeon will tell the 500-year-story since the arrival of Juan Ponce de Leon on the eastern shore of Florida.

This boat is 51 meters long and 3.4 meters deep. In its main deck are the bowsprit and three masts for the seven sails. The stern culminates with a Marian representation, in particular of the Esperanza de Triana, whose replica (the sculptor Antonio José Labrador Jimenez ) is also located in the chamber officers. The predominant materials are oak and pine with a coating of fiberglass unique in this type of replicas. Despite being a replica, El Galeon includes current technology especially to guarantee safety.

El Galeon traveled thru the Suez Canal, visited Shanghai, Hong Kong, and the Philippines before crossing the Atlantic in 2013 for a tour of the Caribbean and the United States.

Special thanks are given to Barry Smith, Harbormaster at Clinch;  Mike Wills, Rod Jones, Mike Estes and Team Elmers for making this visit possible.

Donations can be made online at fundacionnaovictoria.org/tickets/donations-galeon-traverse-city/.