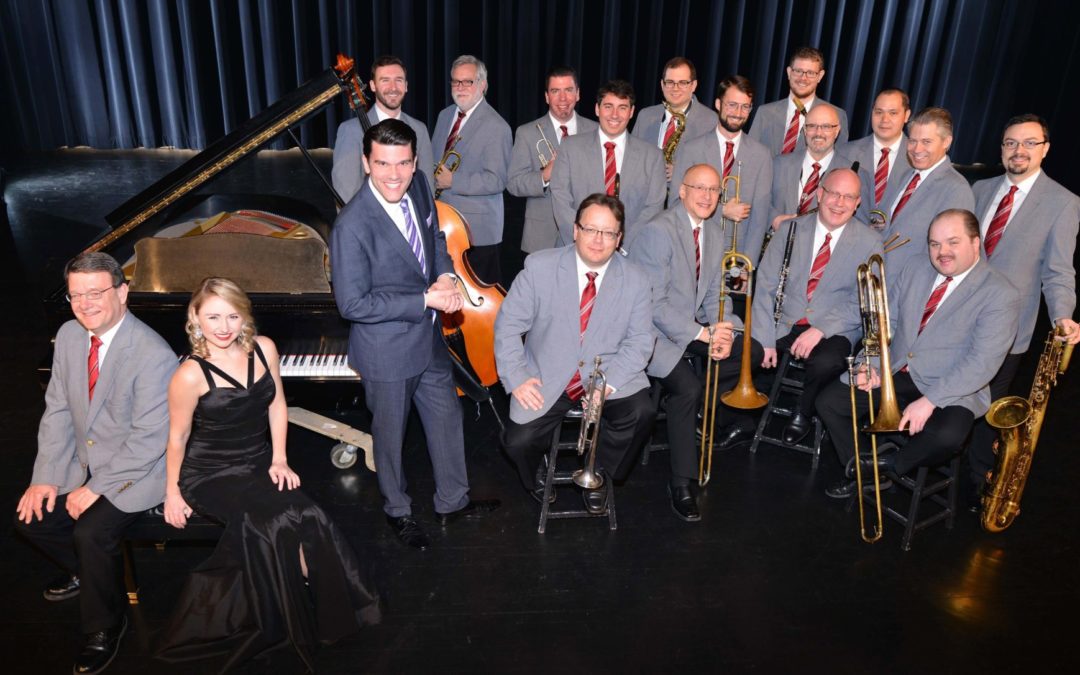 Seventy years after Glenn Miller’s death, the Glenn Miller Orchestra continues to tour playing the band’s some 1,600 songs across the world. On July 4, the 16-piece orchestra will perform in Interlochen. MyNorth Media entertainment writer Ross Boissoneau gives a look into this Northern Michigan music event.

Glenn Miller died in 1944, 10 days before Christmas, when his plane disappeared over the English Channel. Despite his death, the Glenn Miller Orchestra continues to tour, and tour, and tour. Now, more than 70 years later, it is fronted by singer and music director Nick Hilscher, who grew up with the music. “Miller’s music has been part of my life since I was 11,” said the 39-year-old Hilscher. “This was my first really big professional gig.”

Hilscher originally joined the band as vocalist in 1998, staying on until 2005. He returned in 2012, this time as vocalist and music director. “It was like going home,” he said during a rare day off. The band tours constantly, 46 to 48 weeks a year, doing four to five shows each week, keeping alive the memory of Miller and his hits: “Sunrise Serenade,” “In the Mood,” “A String of Pearls,” and many more.

Today the band performs both instrumentals and vocal tunes; for the latter, he shares the mic with his female counterpart, Maria Schaffer. “I love this music. Every night is different. We love what we do,” he said.

Some of the members of the 16-piece orchestra are veterans of many years standing, while others are in the band for only a year or two. “We’ve toured Japan every year since 1964. That’s a really big draw (for musicians),” said Hilscher. “They want to make sure they stay on for the month-long Japan tour. Some (players) really enjoy it and stay on for a while. It’s probably a two or three-year average.”

The group has some 1,600 songs in its book, half of which came about during Miller’s tenure, the others being written in the same style. Of that, the group carries nearly 250 tunes in its roadbook. Hilscher said they have some songs they perform at every show, while Hilscher said others come and go from show to show. “We have the standard hits: ‘A String of Pearls,’ ‘Little Brown Jug,’ ‘Chattanooga Choo Choo,’ ‘Moonlight Serenade,’ ‘In the Mood.’ The other material we change out nightly.”

Glenn Miller began playing mandolin and cornet as a youth, before switching to trombone. By the time he graduated from high school in 1921, he had decided to become a professional musician.

While he enrolled at the University of Colorado, he spent most of his time pursuing professional gigs, eventually leaving school to play with various groups. By the early 30s he was working as trombonist, arranger and composer for the Dorsey Brothers. He assembled an American orchestra for British bandleader Ray Noble, where he began developing the sound of lead clarinet over four saxophones, which eventually became the signature style in for his own big band.

Miller’s reign as the most popular bandleader in the U.S. was relatively brief, lasting only about three and a half years, from the spring of 1939 to the fall of 1942. But during that period he utterly dominated popular music, scoring numerous Top Ten hits. Over time he has proven the most enduring figure of the swing era.

“‘Sun Valley Jam’ reminded the crowd of how powerful riff-based big band music can be, as the reed and brass sections took turns in the driver’s seat. The familiar Miller sound of clarinet over saxophones made the first of many appearances as soloists stepped forward in quick succession.” – Portland Press Herald