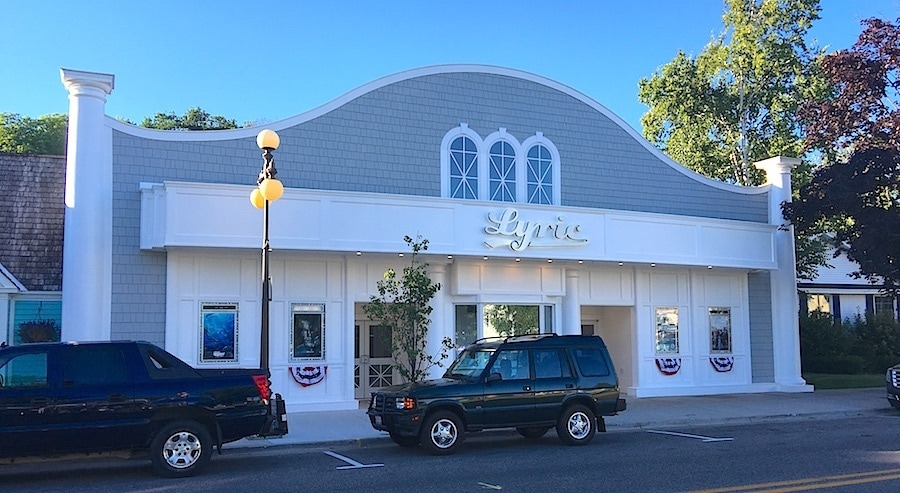 Oklahoma! will be the first film in 35 years to be shown at a Harbor Springs movie theatre. The newly reopened Lyric Theatre will play the classic movie on Wednesday, July 27 at 11 a.m.

The former Lyric Theatre originally operated at 153 E. Main St., where The Outfitter is located today. Moviegoers gathered there from 1926 until August 1, 1981, when it closed its doors.

“A theatre serves as an economic engine and brings people to restaurants and shops downtown,” says Roger Blaser, president of the Harbor Springs Lyric Theatre, Inc. “When the Lyric closed, it cut an economic hole in the heart of the community. Back at the turn of the century, just about every town had a theatre. Many went out of business over the past few decades. We knew we had to get ours back, and we had one chance to do it.”

When the perfect place went on the market, Harbor Springs Lyric Theatre, Inc. took its chance. The 501(c)3 dedicated to reviving the beloved downtown destination purchased the property located at 275 E. Main St. and has been renovating the building for the past year.

The reborn theatre will show new movies, classics and documentaries on the three screens inside and even host small live performances.

Each of the three theatres at the Lyric has its own theme and experience. The largest one, which can seat 205 people, has a starry ceiling with Northern Michigan’s August constellations. Murals on the walls make it feel like you’re sitting in the middle of the harbor, Roger says. The second was designed to make viewers feel like they’re sitting in a railroad car, which is how many people traveled to Northern Michigan before automobiles became popular. The third theatre’s theme has yet to be decided, though it will likely be winter related to promote visiting the community year-round.

In honor of the community’s residents, Oklahoma! was chosen as the first of the Wednesday Classic Series. “A lot of people don’t know this, but Harbor Springs has a large population of residents from Oklahoma,” Roger says. “There are also seasonal people from Chicago, Ohio, St. Louis and New York, but a large group is from Oklahoma.”

Other films showing this week include Finding Dory, The Man Who Knew Infinity, Love and Friendship and Jason Bourne. View the full schedule here. New movie tickets range from $6.50 to $8.50, but film lovers can also catch a classic matinee for $2 or a 25-cent Saturday matinee.

As a non-profit, the Lyric Theatre is run with the help of volunteers. If you’d like to help with concessions, ticketing, etc., contact Executive Director Scott Langston at 231.881.6580.

After visiting the Lyric Theatre, check out these 5 Northern Michigan movie theaters in small towns.