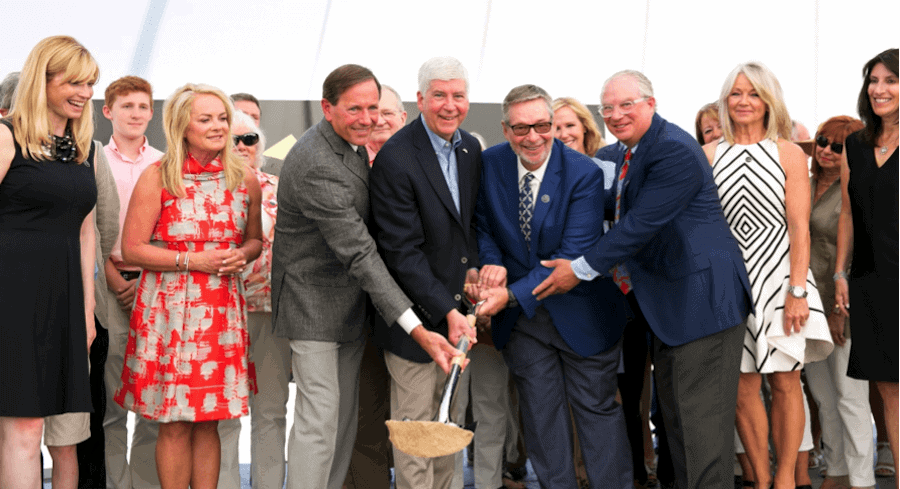 The Great Lakes Center for the Arts broke ground July 2 in Bay Harbor. Scheduled to open in July 2018, the year-round destination for the cultural arts will have a 500-seat theater with a private box area, an exclusive donor lounge, a rooftop patio and more.

“The groundbreaking ceremony was a true community celebration with over 400 in attendance including community, business and arts leaders, Founding Circle donors and elected officials,” says Executive Director Jill O’Neill. “The Center was honored to have Governor Rick Snyder speak to the importance of the arts in creating the vibrant communities and quality of life for our young people to attract them to stay and work right here in Northern Michigan.”

Preliminary site work began prior to July 2 and will be continued in early fall. Full mobilization for foundations and footings is planned for October, and between October and May “the box” will emerge from the ground. Interior work will continue through 2017 with the grand opening slated for July 2018.

Construction of the Great Lakes Center for the Arts is being done by Michigan firms TowerPinkster Architects and The Christman Company along with the New York theater design firm Fisher Dachs Associates. So far, over $20 million of the $25 million capital campaign has been raised to fund construction.

When the center opens, visitors can expect world-class performances of classical, jazz, popular and country music along with theatrical productions, music festivals, opera, films, dance, lectures and children’s series. The 2018 season is being created by Artistic Director Michael Kaiser. “Thoughtful and fruitful discussions are ongoing with many fine regional and statewide arts organizations about opportunities to collaborate starting with the 2018 season and to support each others’ missions year-round,” Jill says.

The center, as a 501(c)3 non-profit organization, is also working on growing its board of directors. The board currently has 10 individuals with plans to grow to include 25 to 30 members over the next five years. The center will also continue to build a team of experienced staff over the next two years as the opening approaches.

To learn more about the Great Lakes Center for the Arts, visit www.greatlakescfa.org.

Photo(s) by Great Lakes Center for the Arts