Exploring the History of Glen Haven The village of Glen Haven seems to hang suspended in time. Waves crash on the beach. Birds flit from tree to tree. The serene atmosphere is only broken by bikers taking advantage of the town’s rest stop and the absolute chaos that is the summer tourist season. But what is now a chaos filled with rumbling cars and screaming children used to be the rumble of ships and the chatter of a busy port. Founded in 1857 and originally called Sleeping Bearville, Glen Haven exploded as a pivotal piece in the Great Lakes lumber industry. However, after the expansion of the trucking industry, steamboat freight became almost obsolete. The little village, devoid of its life-source slowly dried up until it was bought and restored by the National Park Service in the 1970s.

The origin of Glen Haven can be traced to the hotel (pictured above). Originally known as the Sleeping Bear House, it housed the guests of the little village for nearly one hundred years. D.H. Day himself married the daughter of the innkeeper and lived in the second story for a while. In addition to Day and his family, the inn hosted an eclectic mix of lumberjacks, dock workers, businessmen and posh passengers. Late 19th century Glen Haven was a place of business and organized chaos. The inn was where hard work could be put aside for a night of drinking and laughter. But the force of progress continued to push forward, leaving the little town of Glen Haven behind. The inn was forced to close. The laughter and crackling of the fire has been replaced by the babble of tourists, and the clicking of bicycles outside. While the building is locked and inaccessible to the public, it is being restored and maintained by the National Park Service so that future generations can appreciate its importance.

By the 1900s D.H. Day owned Glen Haven, 5,000 acres around it, 5,000 cherry and apple trees, a farm with hundreds of hogs, and a massive lumber company. Day was smart. He could see that the demand for lumber was falling rapidly and he would need to diversify. So he started a canning company in the building that used to house items to be shipped. Another part of his diversification plan was to build the Glen Lake area into the most exclusive resort in the United States. However this didn’t last long.  Mainly due to the Great Depression, his plans fell to ashes around him and the canning company closed. But like a phoenix rising out of the ashes, the Park Service restored the striking red building into the Maritime museum. Where machines and boxes of cherries once stood now sits small wooden boats which were used in the Manitou passage. It is used to educate people on the many different cultures that call Northern Michigan home. This museum is the largest public exhibit of Great Lakes small watercraft in the world. There was only one place in the late 19th century and 20th century that provided the necessities for life—meat, produce, fabrics, communication and tools. The General Store. It served as the telegraph office and visitor center along with the grocery store. It was the nerve center in the hustle and bustle of the town. D.H. Day’s own wife refused to live in the large home he built her and insisted instead on living above the store. It continues to be a center for life in the village today. The aged floorboards, which was once scuffed by the clunky boots of lumberjacks and the polished shoes of businessmen, now sees sandy sneakers and flip-flops. The evening light streaming through old windows stains commemorative mugs and informational books instead of produce. The telegraph has been replaced with a landline and incandescent bulbs replaced with modern fluorescents. All of these changes have been made and yet the building still appears mostly as it was in the 1920s. The Park Service has done an amazing job restoring the building. The wooden furnishings are exact replicas of those in place in the 1920s. Today it is used as both a convenience store and an informational center where visitors can learn the history of town.

Six years after Day’s death, his daughter Marion and her husband Louis Warnes began running Dunesmobile rides out of Glen Haven. It started with a 1934 Ford which took four people out to the crest of the dunes and back. It was a thrilling 35 minute ride that took passengers screaming down the face of the dunes, and jostling through the now heavily protected dune-grass. All for 25 cents. The rides were treated as both a thrill ride and an informational tour. After several years, dunesmobile rides began to attract attention from all around the Midwest. People came from Chicago and Milwaukee to vacation in the relatively unknown gem of a county. The area got its first wave of tourists. One of many to come. A large part of the culture of Glen Haven revolved around these dunesmobiles for decades. Jobs driving the vehicles became lucrative commodities with an extensive application process. Retired dunesmobiles were snapped up quickly. But this momentum slowed down quickly in the face of the 70’s environmentalist movement. There were some who were beginning to claim that the dunesmobiles were increasing the rates of erosion and the National Park Service was forced to close the rides. The garage where the mobiles were stored still stands and although it is closed to the public, many look at it and remember summers spent racing through the sandy mountains. 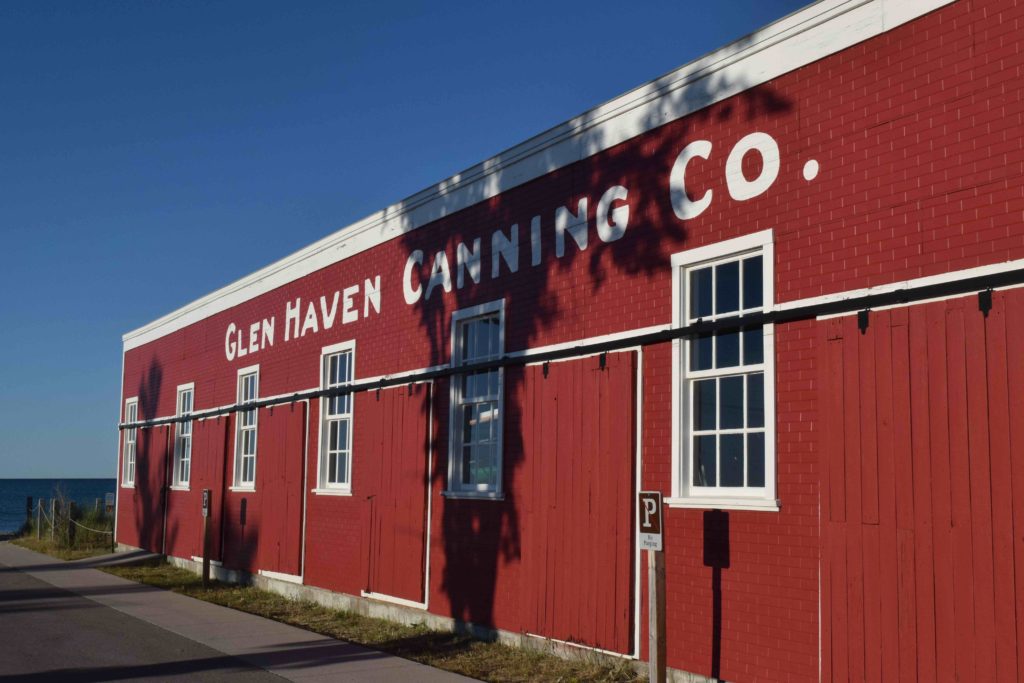 Once a cannery, now the Glen Haven boat museum.

For a ship in the 18- and 1900s, the quickest route from the east coast to the Midwest was through the Great Lakes. This often involved going through the Manitou Passage. Dozens of ships ended up sinking over the years and it was thanks to the Coast Guard crews in Glen Haven and South Manitou that thousands of people kept their lives. The station in Glen Haven started after Congress appropriated money to bring in experienced and highly trained surfmen throughout the Great Lakes region. The main requirement for a surfmen was the ability to row a boat in open water—which is not nearly as easy as it sounds. From 1871 to 1915, the crews saved 178,000 people and its success rate was an astonishing 99%. 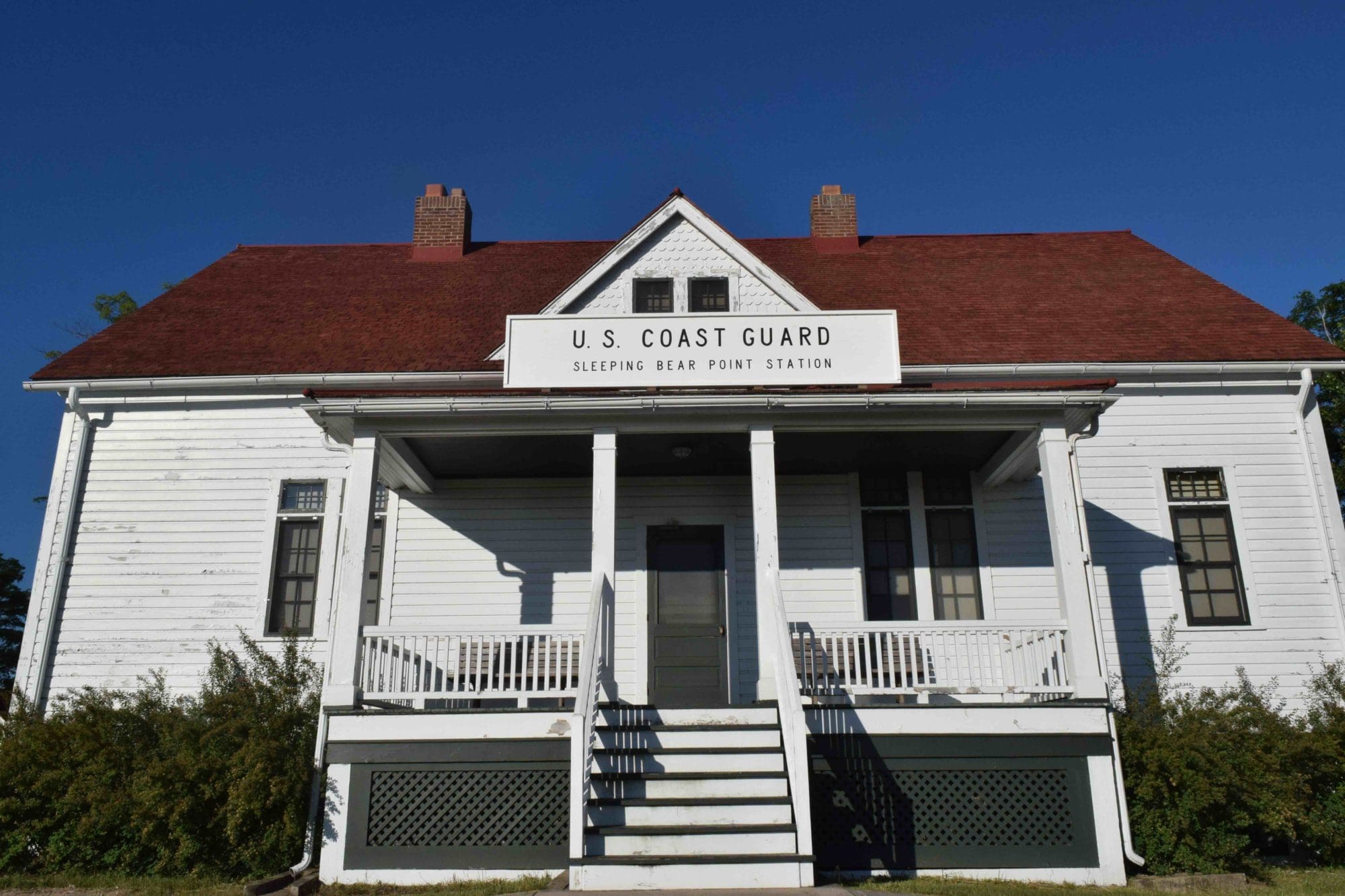 Today the station stands apart from the village but the surfmen were in no way removed from the townspeople. In fact, they were made into folk heroes by the townspeople who had little else to entertain themselves. It was common to see a number of people gathered to watch the daily drills and exercises. But the yelling of the Captain no longer echoes around the shoreline. Men no longer occupy the small dormitories in the second story of the station. Instead a slightly witty park ranger leads small children through drills during which they save Raggedy Anne and Andy from a (not so) watery grave. The dormitory beds rest empty of everything save for a small “please do not sit” sign. The walls are now adorned with a peachy paint along with fire alarms and extinguishers that are certainly a new addition. The room upstairs has been remodeled to look like the Captain’s headquarters in a ship with all of the equipment. It is a fascinating time-capsule that the National Park service has created. The historic town of Glen Haven which might have been lost, has been restored for the purpose of benefitting future generations.