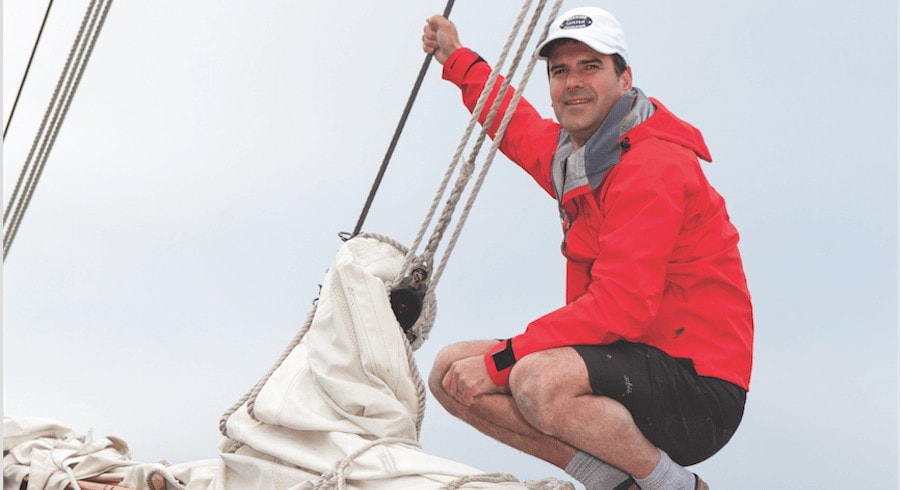 As a mechanic in the Navy, Scott Ford was accustomed to using his hands and wits to fix everything from a V-8 bulldozer to a 100-foot-tall crane. So when a freak reaction to a vaccine he received in the military cost him his eyesight and his career, he admits it pretty much crushed him. But now, many years later, Ford says his blindness has opened more doors than it closed. Among other things, it has even meant carving out a new life as a world-class sailor.

So one of the really interesting parts of your story is that you only got into sailing after you lost your vision.

That’s right. I had never sailed before, but I had always been into sports. Initially, I went to a sports camp for the blind at Western Michigan University, and that was a real turning point for me because it demonstrated that sports could continue to be a part of my life. So in 2007, I moved to Traverse City, and someone suggested I get involved with the Maritime Heritage Alliance because I could learn to sail. And so I walked into their welcome event as ‘the blind guy with the cane’ and said, “OK, I’m here!” And what’s awesome is one of the captains put me right to work. And that’s where I learned to sail—on the Madeline, which is a classically rigged, 70-foot wooden schooner. Then in 2013, I got a message from a U.S. silver medal–winning paralympian sailor, and she was looking for a crew member to sail in the North American Challenge Cup, which is a disabled sailing regatta. So I sailed with them, and the next year, Warrior Sailing—a program for disabled active military and veterans—asked me to come out and sail with them. And I got there, and within a day they said, “OK, you’re now on the team.” And I was like, “I didn’t realize I was signing up for a team!” But by the end of October, I was sailing in the disabled nationals.

And some people might be surprised to learn that when you’re sailing, you’re often the one steering the boat.

Well, this is the most awesome part about a sailboat. As long as you know the rough direction of the wind and where your destination is, you don’t need to see your destination. When you’re sailing, 90 percent of the time you don’t see your destination anyway. If I’m on the Madeline, I use a GPS system, and I can steer just as straight as any sighted person. But I can tell a lot about what I need to do just from the sound of the sails and the waves lapping at the boat.

We hear some amazing medical advances might allow you to see these really incredibly beautiful places you’re experiencing on the water?

Oh man! Every time I’m sailing the Long Island Sound or the coast of Massachusetts or any of these historically important sailing meccas, I see none of this. It sucks. But I’m there. I’m doing it. Yes, I’d love to have my vision back. And with medical research, it could happen—even relatively soon. They are making incredible breakthroughs for people with my condition. But either way, I’m not going to stop living life.