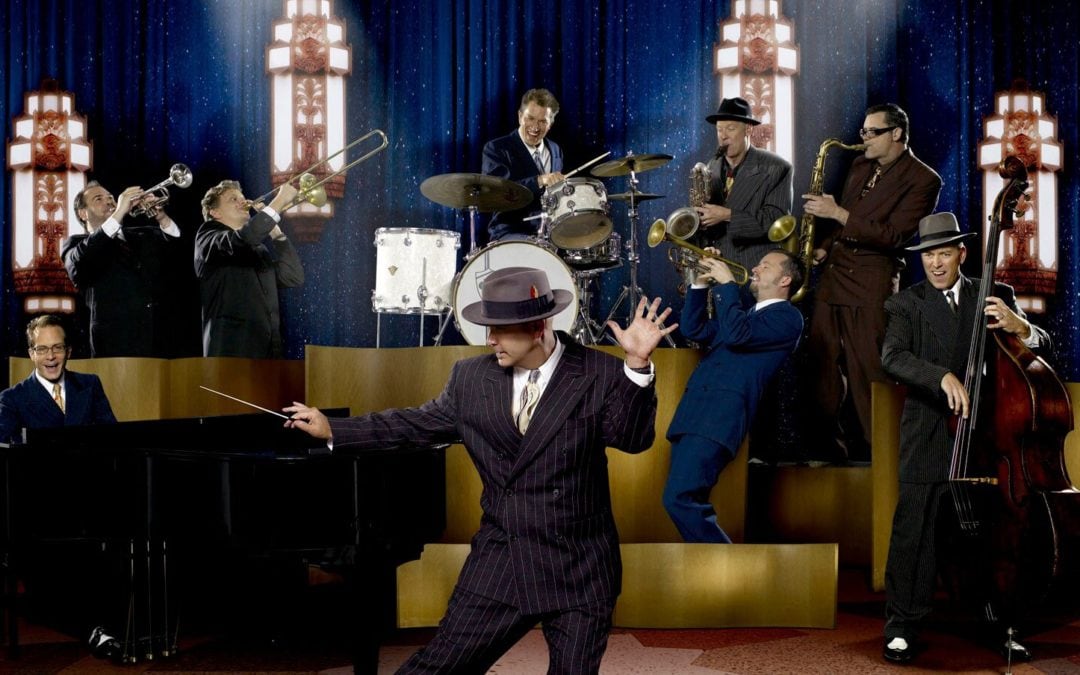 Like Cherry Poppin’ Daddies, Squirrel Nut Zippers and the Brian Setzer Orchestra, Big Bad Voodoo Daddy came to notice during the Swing Revival of the 90s. The band, known for its energetic performances, has outlived that period and is now nearing a quarter century of touring the country. “Our live show is how we earn a living,” said drummer Kurt Sodergren, who has been pounding the skins for BBVD since its inception 23 years ago. “It’s the music and how we play that connects with people.”

Sodergren sees the other surviving swing outfits as compadres, not competitors. “We were in Ventura and saw Royal Crown Revue at the Derby (a since-closed club in Los Angeles). They had a great crowd. These guys are road dogs just like us,” said Sodergren. “I think they are an amazing band. I think we are too.”

The group’s three-man horn section is augmented by two more players on the road, giving it the feel of a little big band. Current BBVD shows draw from an upcoming project honoring the three Louis’s: Louis Armstrong, Louis Jordan and Louis Prima. “It’s half (that) and half our traditional music. There are so many ways to go,” said Sodergren.

On a personal level, Sodergren says he draws from a number of influences, Gene Krupa, Buddy Rich, Peter Erskine among them. One of the biggest was onetime Yes and King Crimson drummer Bill Bruford, who did a clinic while Sodergren was in high school. “He really opened my eyes. He had a really interesting kit.” Another is Jay Bellerose, who has performed with B.B. King and Robert Plant & Allison Kraus, among others. “Just seeing someone at a show with bells around his ankle,” he said with a laugh, as Bellerose frequently complements his vintage kits with various percussion toys strapped to his legs.

A glance at the drum chair during nearly any moment of a Big Bad Voodoo Daddy show will reveal a smiling Sodergren. “People ask me why I smile all the time. I think it’s just fun to play. I get up there and I’m in the zone,” he said. No doubt that feeling translates to the audience, which frequently includes people dancing to the music. “From day one, heads would turn” at the sound, said Sodergren. “It’s the chemistry of the band.”

Singer and guitarist Scotty Morris had played in various punk and alternative bands starting in the early 80s. He teamed up with drummer Kurt Sodergren to form a bluesy band that morphed into swing after they caught Royal Crown Revue, one of the first bands that inspired the swing revival of the mid-90s. Morris named the band after an autograph he received from blues legend Albert “The Iceman” Collins, who signed Morris’s poster “To Scotty, the big bad voodoo daddy.” Morris said when it came time to name his band, he felt he didn’t have any other choice.

All told, the band has released a dozen discs. They’ve ranged from the music that inspired them, such as Cab Calloway, to originals derived from various sources. Big Bad Voodoo Daddy has appeared in concert venues across the world, from the Hollywood Bowl to Lincoln Center, and has performed with many of the country’s leading symphony orchestras. The group has graced the large screen (the film Swingers about the swing revival scene) and the small screen, with television appearances ranging from Dancing with the Stars to Superbowl XXXIII.

“During what was perhaps one of the greatest sets of the entire festival, Big Bad Voodoo Daddy pumped out fan favorites such as ‘Mr. Pinstripe Suit’ and ‘The Jitters,’ ‘Go Daddy-O’ and ‘Minnie The Moocher,’ and best of all, ‘You & Me & The Bottle Makes Three.’” – The Montreal Times on the band’s recent performance at the Montreal Jazz Festival

“Longtime fans of the group’s neo-crooner jazz sound, as well as anybody who digs solidly crafted and always swinging traditional jazz and pop, should find much to enjoy here.” – The All Music Guide on Rattle Them Bones

Tickets start at $16. Go to BayViewFestival.org.