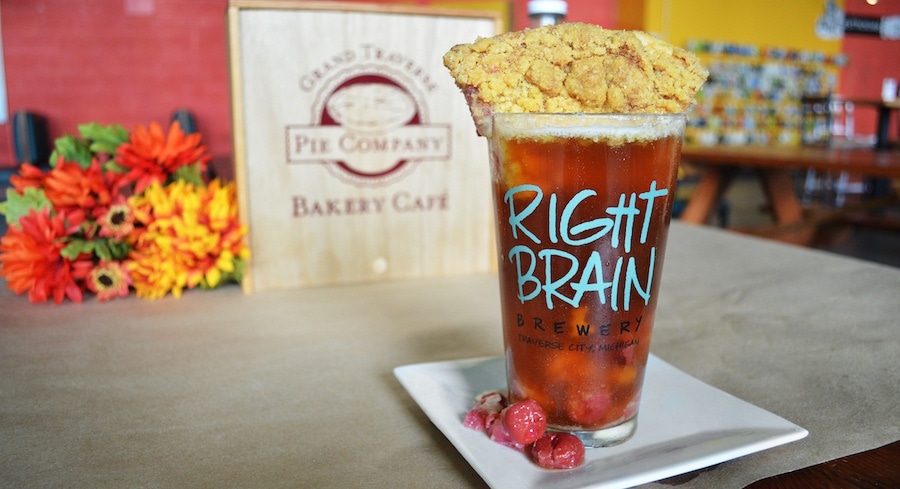 The flavor of Cherry Pie Whole is described by its name. The aroma brings to mind a graham cracker crust pie straight out of the oven, followed by a balance of caramel from the amber ale and tart sweetness imparted by the cherry pie filling, which is used during fermentation.

The beer is part of a larger series Right Brain brews called the Pie Whole Series, which includes Blueberry Pie Whole, Pecan Pie Whole, and Apple Pie Whole. The idea for this series stemmed from a speech Right Brain owner, Russ Springsteen, gave at the University of Michigan where he discussed the creation of Right Brain’s Great American Beer Festival gold medalist, Mangalitsa Pig Porter. The owner of Grand Traverse Pie Company was in attendance, and asked Springsteen, “If you can brew a beer with pig heads and bones, why can’t you brew a beer with whole pies?”

“So, the rest of the story is a new partnership was formed,” says Mike Busley, co-founder of Grand Traverse Pie Company. “Our partnerships with other Michigan companies like Right Brain are a great way to support entrepreneurial opportunities within the agricultural and food businesses of our state. Our initiatives with Right Brain support these values while promoting Pure Michigan’s cherry and micro beer industry, so cheers to the 2016 Cherry Pie Whole beer!”

Cherry Pie Whole will debut at Right Brain Brewery’s Traverse City tap room on Friday, July 1, and will be available on draft, with to-go growler fills offered as well.

Our focus is on creating one-of-a-kind culinary inspired brews. If you taste something in our beers, like asparagus, cherry pies, or real pig, it’s because we put it there using only whole natural ingredients.

Right Brain brews can be found throughout the state of Michigan in bottles, cans, and on draft. Keep Beer Curious.