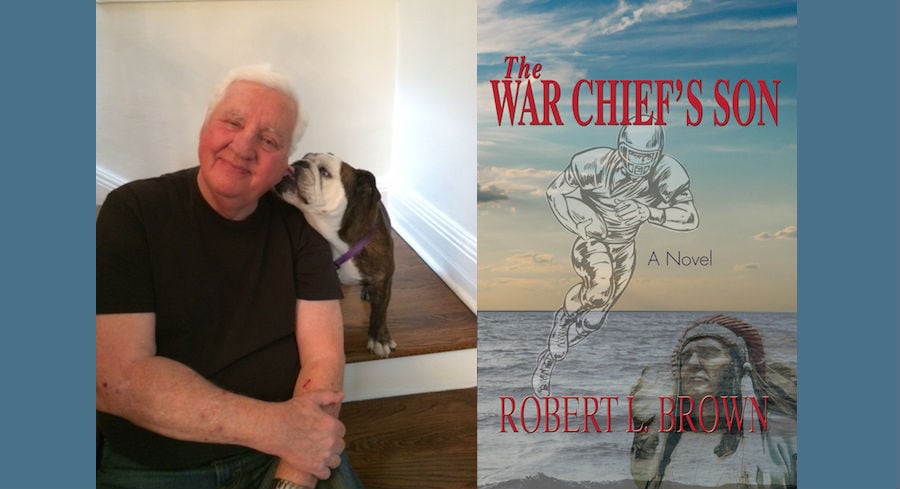 P.D. James said, “It is only by writing, not dreaming about it, that we develop our own style.”

After he retired from a successful career in finance, Rob embarked on a new venture—this time as a writer. His hard work has led to two successful novels and more on the way.

“I didn’t have time to write,” he said, referring to his former career. “I had a wife, three children, a house in the suburbs, two cars, a country club membership, a dog, and a cottage in Harbor Springs. My day job was demanding and necessary.”

During his 40 years in Chicago he wore many hats, including banker, stockbroker, college economics instructor, commodities trader, and brokerage firm branch manager.

But Rob is also a storyteller and, like any good spinner of yarns, he is inspired by his observations of the world around him. “There are an unlimited number of stories out there waiting to be told,” he said.

The Little Traverse Bay area inspired his first novel, The War Chief’s Son. It was both the natural beauty and the people who lived there that fed his muse. “As a boy I walked along the sidewalk in front of the beautiful summer homes in Wequetonsing and Harbor Point and wondered how people could have enough money for such large houses to use for a few weeks every summer when some of the kids in my school (especially the Native American kids) were desperately poor,” he said.

Rob was also influenced by the historical events that shaped the country. “I read about a battle fought about 15 or 20 years before the American Revolution. The Great War Chief, Pontiac, defeated a young major by the name of George Washington. Perhaps Pontiac’s spirit could return to help an Odawa boy who had nothing.”

In The War Chief’s Son the main character, Beau Lightfoot, is born into a world of isolation and poverty. His mother is an Odawa Indian and his white father is an abusive drunk. When Beau is eleven years old, his mother disappears, never to return. The spirit of Pontiac, “The Greatest War Chief Who Ever Lived,” appears to Beau and guides him and his sister to sanctuary at the Holy Childhood Indian School in Harbor Springs, Michigan.

Lightfoot goes on to attend the University of Michigan, also Rob’s alma mater, where both played football. Rob says he played tight end on the freshman team but, unlike Lightfoot, he didn’t move up to varsity and become a star.

After Rob retired, he and his wife Ruthie moved to Seattle where he studied creative writing at Richard Hugo House, the University of Washington, and Story Studio.

His latest book, Zero Tolerance was a finalist in the Pacific Northwest Writers Association fiction competition, where there were hundreds of submissions from more than thirty states and several foreign countries.

These days Rob, Ruthie, and their bulldog Gloria split their time between Harbor Springs and Chicago. We caught up with him at his home in Chicago.

Was writing always something you thought about?

“I always thought about writing but didn’t act on it. I didn’t have the courage to leave my day job and become a professional writer. I was too afraid I wouldn’t be able to take care of my family. As it turned out, my family was well taken care of. Now they are all grown-up and I am writing as my second career.”

What is your process?

“I write in longhand on a yellow legal pad. I blast away and get my thoughts down very quickly with no concern for spelling, grammar, punctuation, structure, et cetera. I concentrate completely on the characters and the story and don’t let myself be sidetracked by anything else. After this initial step, I sit down at my computer, clean up my work a little bit, and make a rough first draft. After a few more drafts and rewrites, it is more or less ready to go.”

Who are your favorite authors?

“Masters of Empire: Great Lakes Indians and the Making of America by Michael A. McDonnell and the 2015 edition of The Best American Sports Writing edited by Wright Thompson and Glenn Stout.”

What will be your next book?

“I’m working on a sequel to Zero Tolerance, which will feature the same cast of characters.”

What advice do you have for young writers?

“I don’t think I should presume to give advice to young writers. AFTER I make the bestseller list, I’ll give some advice.”

What were your favorite books as a child?

“The Frank Merrywell at Yale series. In those long past days when I was eight or nine years old, Yale was an athletic powerhouse. Frank was always doing things like escaping from kidnappers just in time to make it to the championship baseball game and hit a home run in the ninth inning and win the game. After the game, Frank said it was a team victory and he didn’t do anything special. I loved it.”