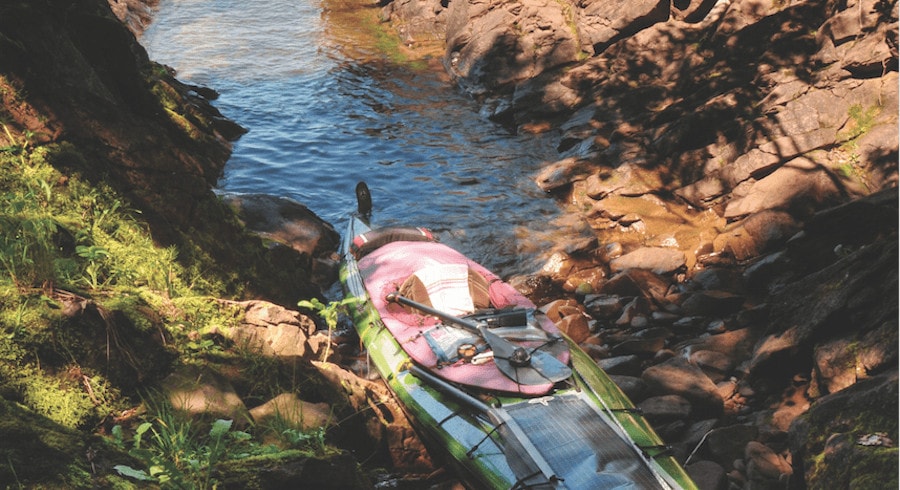 Over the course of six summers, Steve Brede canoed solo around all five of the Great Lakes. Here he shares inspiring thoughts and photos from the epic Great Lakes paddling achievement.

“There is a pleasure in the pathless woods,There is a rapture on the lonely shore, There is society, where none intrudes, By the deep Sea, and music in its roar…”

Cars, cars, cars. They line the street in front of my house. Fill the downtown. Surround our schools. Acres of them squeeze into sprawls of malls. From sales lots to streets to scrap yards they buzz, locust-like, crashing and mashing the land. What once was green is now covered by machines.

Sit, sit, sit. From the car to the desk to the couch, this had become my “lifestyle.” I squeezed in a few hours a week of yoga or hiking or skiing, but that was way short of the big stretch my back, and brain, begged for.

I bought a canoe shortly after moving to Northern Michigan in 1988. It had been 25 years since I’d paddled, and I had forgotten how quickly worries dissipate in the wake of a canoe. I became a regular of the “Wednesday Night Paddlers,” a group that meets summer evenings after work to paddle the area’s lovely rivers and lakes, with occasional forays into Lake Michigan.

Paddlers are as susceptible as other boaters to “two-foot-itis,” and in search of a new ride I discovered the Kruger Canoe, a 17-foot solo expedition canoe. Its builder, the late Verlen Kruger, when in his 40’s, left his plumbing business and spent the remaining 40-plus years of his life building canoes and undertaking paddling adventures comprising 100,000 miles throughout the Americas, including signiﬁcant sections of Great Lakes coast. A newspaper article that quoted him as saying he would have liked to have canoed around all the big lakes got me thinking … 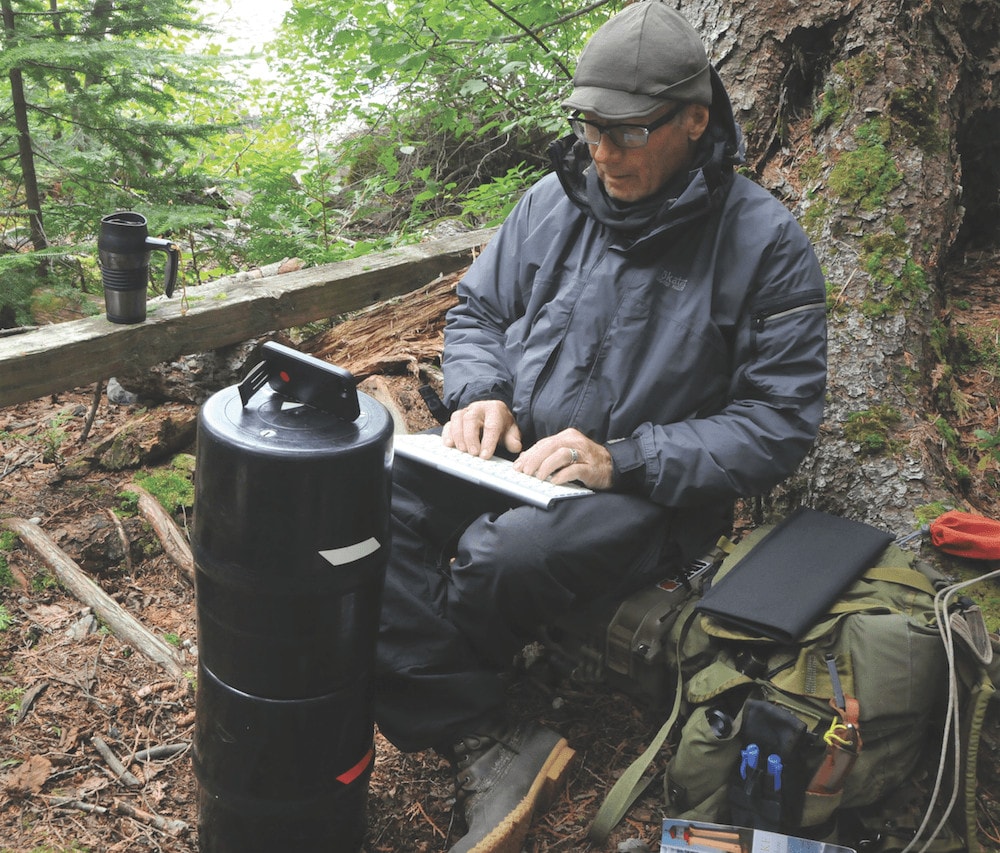 I bought a used Kruger in 2007, named her Seaweed and for the next two years acquired a boatload of camping gear, food, maps, and books about solo voyagers. I left my job in the spring of 2009. In late June, at the Mackinac Bridge’s south rampart, my wife, Ruth, and a dozen friends wished me bon voyage, as I headed out, counterclockwise, around Lake Huron. I had no expectations, and set my speed to one moment at a time.

Thanks to a simple canoe, the kindness of strangers, and an abundance of good luck, I made it around Huron in about three months. Next was a paddle around Lake Michigan the following summer. Then Lake Ontario in 2012. Lake Erie in 2013. The south shore of Lake Superior in 2014, and the north shore in 2015.

I’m often asked which lake I liked the best. The answer is, I love them equally. All have been abused and exploited to various degrees, but each retains incredible power, beauty, and life.

“… I love not Man the less, but Nature more, From these our interviews, in which I steal From all I may be, or have been before, To mingle with the Universe, and feel What I can ne’er express, yet cannot all conceal.” –Lord Byron

When I pushed into the Straits of Mackinac to start this great journey, I didn’t know if I’d be gone a week or a summer. I’d read a lot, thought a lot, packed a lot. What I hadn’t done was a lot of lake paddling. Heading into a hell of a headwind a few days in, I looked over my shoulder at a tree on shore, and realized I wasn’t moving forward. I was, I thought, using all my strength. I dug deeper, and inched ahead. Half an hour later I glided into a protected cove. My will and the wind’s came to an understanding that day.

Launching from shore, crossing the fluid line between land and lake, I feel transported to another planet. My little spaceship a speck in a vast blue. A quarter-inch-thick sheet of plastic, molded from a centuries-old form, floats across vast depth into a place of water and air and sun owned by no one, but available to everyone: The commons. No buying, no selling, no advertising, no trespassing. The sun rises, arcs, and sets. My ship turns, and returns, to Earth.

Her name is noted by French writers, who learned it from the Iroquois Nation’s Erie Tribe, as meaning “cat,” because of her unpredictable and dangerous nature. No one loves their cat more than the people on Erie’s shore. In the late 1960s she was declared “dead,” killed by pollution. Subsequent cleanup and new regulations brought her back to life. Her wetlands again teem with wildlife, and she’s home to the Great Lakes’ largest ﬁshery. People jam her beaches, and I saw more paddlers on Erie than any other lake. “So much better now,” they told me. I hope they keep caring. Only eight lives left.

I landed at Presqu’ile Point, a peninsula 100 miles east of Toronto. I’m lying in the warm sand when a young man carrying a sail stops to ask what I’m up to. I explain, and ask if it’s okay to camp on the beach. “Sure, lots of people do. Hey, want to go for a sail?” After we sail, he invites me to dinner at his family’s cottage. He takes me to a party. He invites me to stay at his home in Toronto when I get there, which I do. I spend three nights. While he works, I roam the city, following little maps he’s drawn for me.

I dragged seaweed across the cobbles after a glorious day with wind at my back, paddling over crystalline water. I left the canoe, and headed into the woods to ﬁnd a place to camp. I’d just entered the cedars when I saw a blue otter standing in a shaft of golden light. I froze, as did he, and we stared at each other. Later, I googled “blue otter.” I found restaurants, sunglasses and a software company named “Blue Otter,” but no science about an otter being blue. Two days later, I came across a piece of ﬂotsam. I pulled it from the water: A little bathtub toy, a blue otter.