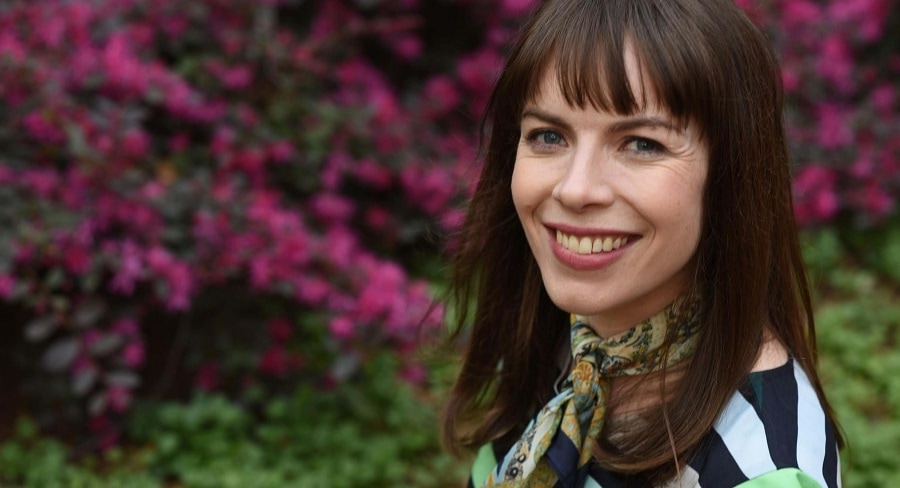 TRAVERSE CITY: On the evening of June 30, Dr. Lucy Kalanithi will take the City Opera House stage to talk about When Breath Becomes Air, a stunning memoir by her late husband, Paul Kalanithi. Bestselling author Doug Stanton is a guest host for this highly anticipated National Writers Series evening.

Written with dazzling prose about life, love and mortality, this posthumous memoir was written by Dr. Kalanithi, a brilliant neurosurgeon at Stanford Medical University who in May of 2013 was diagnosed with widely metastasized lung cancer at the age of 36. In March of 2015, within two years of his diagnosis, Paul passed away before completing his book. He was able to spend time with his baby daughter, Cady, who was born nine months after his diagnosis. His wife, Lucy, wrote the epilogue and is on a book tour.

I called Lucy for an interview last week at her home in San Carlos, where she somehow managed to jog the streets while answering my questions. Lucy, a physician and an associate professor at Stanford Medical Center, told me that she and Paul knew immediately that the diagnosis was terminal after looking at the CAT scan. Here’s our conversation:

When Breath Becomes Air immediately soared to #1 on the New York Times bestseller list and has stayed at or near the top of the list for 21 weeks. Why do you think Paul’s book has been so popular?

Before the book came out I talked to Paul’s literary agent, “What do you predict, will people read it.” The agent said, “It’s going to do wonderfully, or it will completely flop. It just depends on whether people want to pick up a book about a man who had died and is writing about mortality.”

Paul in the book is talking about how to make meaning throughout his life. He approached it as a reader and a lover of literature and a student of philosophy and a neurosurgeon—and in each of those phases, what makes us human and what gives us meaning to our lives? When he becomes sick and he knows he’s going to die shortly and is figuring out how to spend his time, he talks about dying but these are questions about living. How do you want to spend your time?

In the book, Paul writes about making some significant decisions after he was diagnosed with stage IV lung cancer. He doesn’t know exactly how much longer he has to live, so he decides to complete his medical training and to write a memoir. You and Paul also decide to have a baby. He also writes about how your marriage was fraying at the time when he was diagnosed, and you decide to repair it.

Something did happen in our marriage. We obviously were having a rough patch, missing each other and attempting to connect. We were so busy with work, we both felt lonely at home. It all came out on the table two weeks before he was diagnosed. We sort of got all that out, so none of that was hidden, and then we felt really hopeful and started to draw back to each other. And then he is suddenly diagnosed with terminal cancer. It puts that in perspective, it gives us a whole new path to be focused on our marriage—how do we help you live now, however long it is. I feel like we’d been going through this period. In retrospect, we hadn’t been giving each other the benefit of the doubt. The thing that cancer diagnosis did, overnight, is we gave each other the benefit of the doubt.

What do you mean exactly—giving each other the benefit of the doubt?

I think it means give them some room take their actions at face value and with kindness. Like Paul wasn’t as much of a talker. He was really gregarious but also introverted, so when he was writing the book, it was written for the reader, and at the same time, it was a tool to make sense of what was happening. He wrote down things that were more intimate of what he could say aloud. I’m a talker. He has a character built to write a book and I am built more to do the book tour. For awhile, I was pulling on him to talk to me before he got sick, and then when he got sick, I gave him some room and then he started talking and writing and his inner life became really intertwined in my mind. I needed to give him that psychic room.

His manuscript was very central to our life. He was writing and Cady was growing. He had this really rich life in his mind and with our family, and I was reading the manuscript daily and weekly so it became it was this sort of really intimate thing. That ended up deepening our ability to communicate within our marriage. Now it’s really this public thing and it was always meant to be, but it wasn’t a year until after he died. 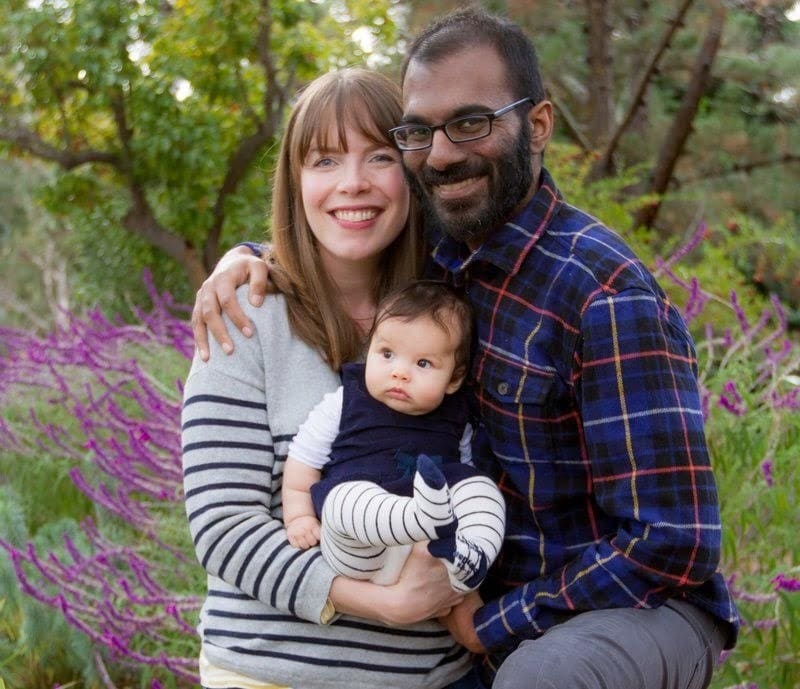 Part of it was Paul was really supportive of me too. You think of the relationship between a caregiver and patient, and the patient is very dependent on the caregiver, but there was really support for me too. … We always loved each other, it frayed, and then it became really deep. His being an agent in the relationship was very important to his being, to who he was, while dying.

So I was open. Whatever he needed in his decision to go back to work as a neurosurgeon, I felt completely committed to helping that happen. All these things were a matter of emotional survival, a life-sustaining thing to be able to support each other and to help him to carry out his goals. In life, it was so urgent. We really needed each other. We were on the way back to that place, and then it solidified that. But it’s interesting because a serious illness or traumatic event can make a family closer or tear a family apart. It sort of depends. By the end of his illness, I would have given anything for that marriage not to have ended, and it ended with his dying. The night before he died, Paul said, “Who even knew how good we would be together?”

I was just talking to some friends about just how incredibly hard the last year or two of old age or disease can be—a topic one friend said was so morbid he asked us to talk about something else.

People are hungry to read about and talk about the topic of how we die. Just look at Atul Guwande’s book (Being Mortal), which has been on the New York Times list for more than a year. I think people are looking for a conversation of how we take care of each other and how we face our mortality. We are at this weird point in history where suffering, illness and death are really hidden. I don’t think that’s always been true in human history. It is ubiquitous but hidden. People are eager to talk about it in a real way. People understand that our values lining up with medical is not always happening—how to have important, uncomfortable conversations of what we want at the end of our life.

How do all these interviews about Paul affect your feelings of grief over losing him?

It’s really nice to talk about Paul; it is really helpful to me. Janet Maslin wrote a review in the New York Times that this is an indelible book. You know he’s dead, but he’s also indelible. In my life, he’s everywhere and nowhere. I do still have the feeling we are a team. I feel connected to him in a certain way because I’m helping him carry out this purpose—to write this book and to share this book. It’s a funny contrast that’s really helpful to me personally. It’s also because I’m a doctor and I get to talk about those bigger questions in health care. It’s also my own purpose being a caregiver. It stretches into my future purpose as well.

I think grief is when people get afraid to talk to people about their feelings. I was nervous to talk about our marriage or our decision to have Cady or things I needed to defend; they’re complicated and messy. But people would tell me a story, about their own life, and it makes me feel connected to their messy and complicated stuff and how people are wrestling with it and making sense of it. That’s the part I actually like. For better or worse, I don’t overthink it, but with the broader audience, it feels like more of an intimate conversation.

Paul was a role model about how to be very intimate. He was alive when two essays were coming out, one in the New York Times, and that was shared all over the world. He got a response that was gratifying. Without having witnessed that, I might not have understood. My sister is a really well-known blogger (Joanna Goddard) who writes “A Cup of Jo,” and she is very open and I always thought that was totally crazy – “That’s not for me, I’m a doctor, I would never be that much of a public person.” But it’s a way to communicate and I think Paul in a way touched more people with his writing than as a neurosurgeon. It’s interesting, being personal has a greater purpose too.

What other ways has his book affected your view of being a doctor?

I think in medicine there is a perceived divide between patients and health care providers. But I think that relationship is about two human beings and one of them happens to know more about medicine than the other one. But it’s understanding the patients’ values and helping to guide them… I think people reading about Paul and a physician facing his own illness makes illness a really human thing, not a transaction.

Dying and illness are going to happen anyway whether or not we talk about it, so talking about it and helping each other through it is the only power we have. Saying it out loud is part of the victory.

This National Writers Series event is supported, in part, by the Cowell Family Cancer Center and the Munson Medical Center Foundation. Each ticket includes a hardcover copy of the book (discounted at 20%), which is available in advance. Ticket prices start at $25 for students. Ticket fees vary depending on how they are purchased. For tickets, please go to cityoperahouse.org, call 231-941-8082 or visit the Box Office at 106 E. Front Street.