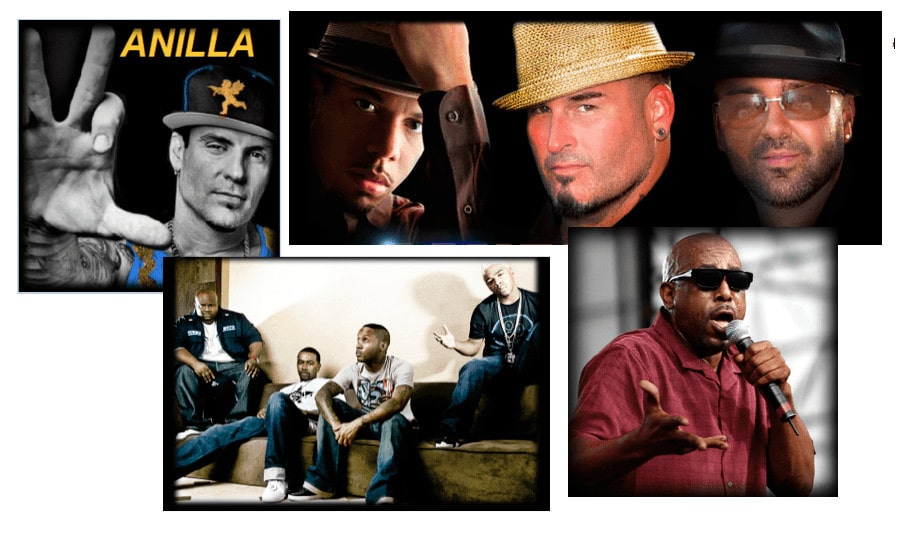 Join in the ultimate 90s Rewind Dance Party in Traverse City with Vanilla Ice, Dru Hill, Color Me Badd and Tone Loc at the National Cherry Festival’s Pepsi Bay Side Music Stage Presented by Blue Cross Blue Shield! The waterfront will be rocking with heart-pounding beats of “Ice Ice Baby,” “I Want to Sex You Up” and “Funky Cold Medina,” and rolling with sultry R&B rhythms like “How Deep is Your Love.” It all comes together on Thursday, July 7 at the base of Grand Traverse Bay.

The National Cherry Festival 90s Dance Party turns up the evening heat of Traverse City’s Open Space and the Cherry Fest is the DJ. The best rap beats. The most inspiring concert location ever. Playlists that make you feel young. It’s funky. It’s hot. It’s a summer rave on the sand. We dare you not to dance.

Vanilla Ice
Vanilla Ice has toured consistently throughout his career since 1990 performing all over the world. The last two years tour stops have included the USA, Canada, Great Britain, Ireland, Scotland, the Netherlands, Spain, Portugal, Russia, Egypt, Turkey, South Africa, Australia and other countries. His worldwide album sales are over 15 million and individual songs total over 160 million and are still selling.

Dru Hill
Dru Hill, under the steadfast leadership of their long time and trusted manager Kevin Peck, has accomplished literally everything an R&B/Pop group could dream of achieving. From having a string of Top 40 #1hit singles, multi-platinum selling albums, movie and television appearances, headlining sold out concert tours around the world, to selling an eye-popping 30 million records worldwide, their star power has never been in question.

Color Me Badd
Color Me Badd is one of the top R&B vocal groups of all time. The group has sold 12 million records in the United States. The group is well known in Australia, Philippines, Indonesia, parts of East Asia, Thailand, the United Kingdom and New Zealand. Their debut album, C.M.B sold over 6 million copies worldwide and became certified Triple platinum in the United States. They have three #1 singles and 17 top 20 singles.

Tone-Loc
Tone‐Loc (born Anthony Smith) soared from obscurity into pop stardom in 1989 when his hoarse voice and unmistakable delivery made the song “Wild Thing” (using a sample from Van Halen’s “Jamie’s Cryin'”) a massive hit. His second hit, “Funky Cold Medina,” secured his position in music and propelled his work in film, including Ace Ventura: Pet Detective, Heat and Bedazzled. His 1989 debut album Loc-ed After Dark was the second rap album to reach #1 on the Billboard 200 after the Beastie Boys’ debut album Licensed to Ill, which was released three years earlier.