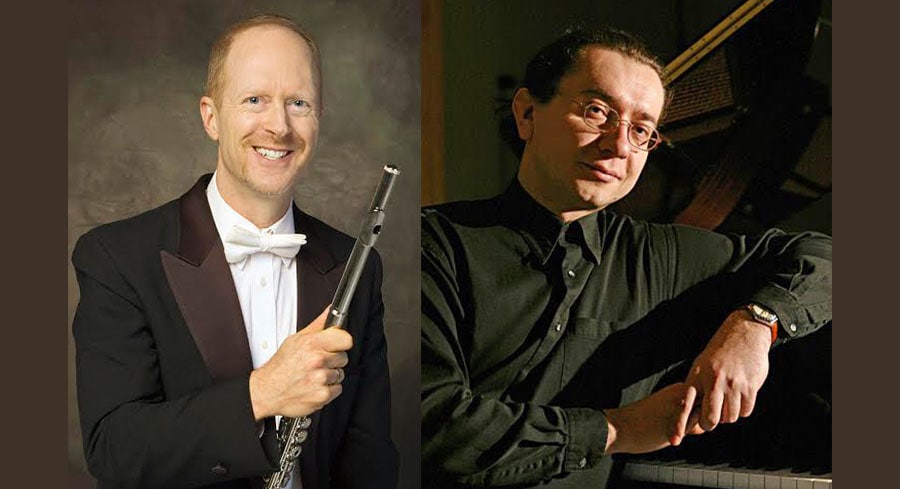 Flutist Richard Sherman has performed across the state, country and world. He earned his Bachelor of Music degree from the Eastman School of Music, a Master of Music degree from Northwestern University, and has had postgraduate study at the Royal College of Music in London. Today he is principal flute with the Chautauqua (New York) Symphony Orchestra and the Lansing Symphony Orchestra. The professor of flute at the MSU College of Music was recently awarded the College’s high honor: The Dortha J. and John D. Withrow Excellence in Teaching Award. He has performed with the Chicago Symphony, the English Chamber Orchestra, the Detroit Symphony and the Toronto Symphony, and as a soloist with the Columbus Symphony, the Rochester Philharmonic, and the Youngstown Symphony.

Genadi Zagor began his musical studies at four and made his professional piano debut at age 10. Since then he has performed to critical acclaim in recital and orchestral appearances across the globe. A native of Russia, he graduated from Krasnodar’s Rimsky-Korsakov College of Music and went on to study at the Moscow State Conservatory with Mikhail Mezhlumov, one of Russia’s leading teachers. Zagor holds prizes from numerous competitions, including the Arthur Rubinstein International Piano Competition, the Leeds International Pianoforte competition, and the Hamamatsu International Piano Competition, and he was a recipient of the America-Israel Cultural Foundation Scholarship for outstanding artists. He frequently appears on Israeli National Television and Radio. Zagor has performed to critical acclaim in recital and orchestral appearances in Russia, Israel, Japan, England, Germany, France, Italy, and elsewhere, with the Moscow State Symphony, Israel Philharmonic, Jerusalem Symphony, South Bend Symphony, and Green Bay Symphony orchestras, among many others. He earned his Master of Music degree in piano performance from Michigan State, where he is also completing a Doctor of Musical Arts.

The first concert for what became the Leelanau Summer Music Festival took place in 2010. Since then, the facility has been completely refurbished. Air conditioning was added, carpets were removed and the original maple flooring was restored, plus the acoustic shell was reinforced and decorative trim was added. The chandeliers now have dimmers so the house lights can be lowered and new stage lighting was added. Artists from across the country and across the musical spectrum have performed at the renovated venue, with an emphasis on classical chamber music.

The Leelanau Summer Music Festival continues July 9 with harpist Sivan Magen, who has appeared as a soloist across the U.S., South America, Europe and Israel, in venues such as Carnegie Hall, Wigmore Hall, the Sydney Opera House and the Vienna Konzerthaus. He has performed with orchestras such as the Israel Philharmonic, the Strasbourg Philharmonic, the Scottish Chamber Orchestra, the Jerusalem Symphony, the Sydney Symphony and the Vienna Chamber Orchestra.

The season concludes July 20 with the return of the duo of Carl Donakowski (cello) and Zhihua Tang (piano). Their program “Polonaise Brilliante” features the music of Chopin and Schubert.

“Genadi Zagor is a one-of-a-kind postclassical artist who combines the improvisational genius of a jazz pianist with the keyboard panache of a great Romantic soloist. As a result of his performance of the “Rhapsody in Blue” with us last season, he was engaged to perform it in St. Petersburg.” – Joseph Horowitz, Artistic Director, PostClassical Ensemble, former artistic director for the Brooklyn Academy of Music and the Brooklyn Symphony

Tickets for the Leelanau Summer Music Festival’s “Music of the British Isles” performance are $20 for adults and $10 for students. Season tickets are $50. Go to www.mynorthtickets.com.