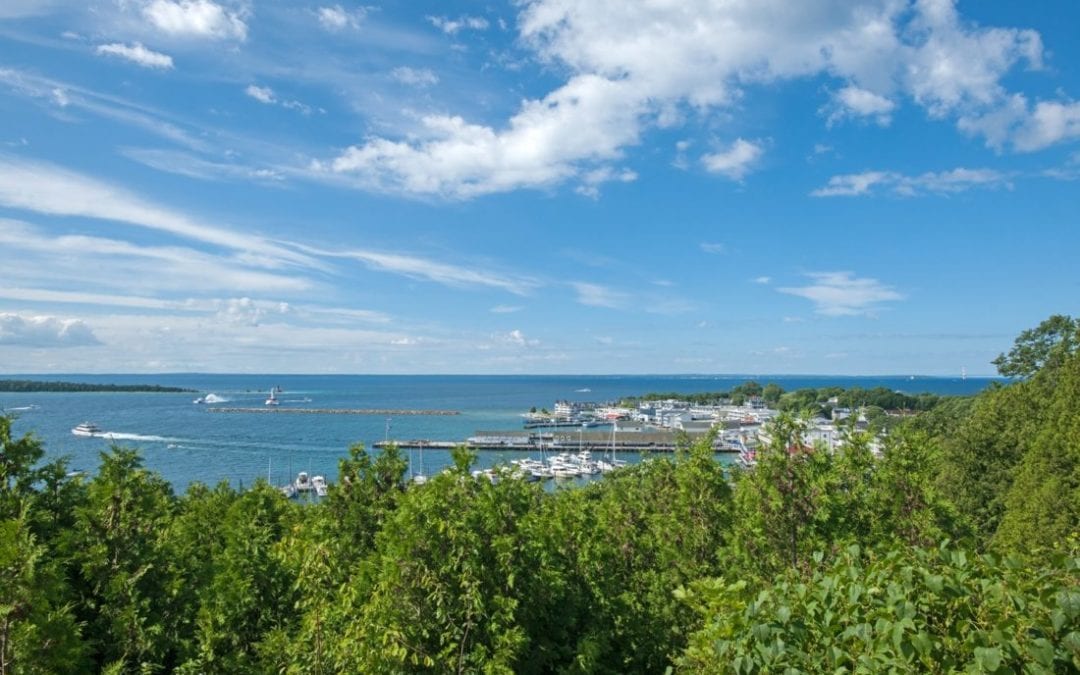 Mackinac Island is bursting with colorful storefronts, classic restaurants, and, of course, fudge—but there’s more to the island than meets the eye. These are the places and attractions that make Mackinac special. 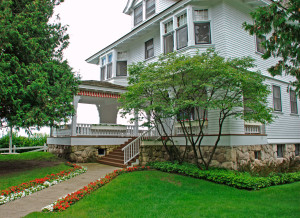 Originally built as a private summer cottage, this pristine Victorian mansion was sold to the state in the 1940’s and converted to be used as the governor’s summer residence. The mansion is the only summer residence provided by a state for its governor, putting Michigan’s governor in a club all to his or her own. The home is open for free public tours every Wednesday throughout the summer. 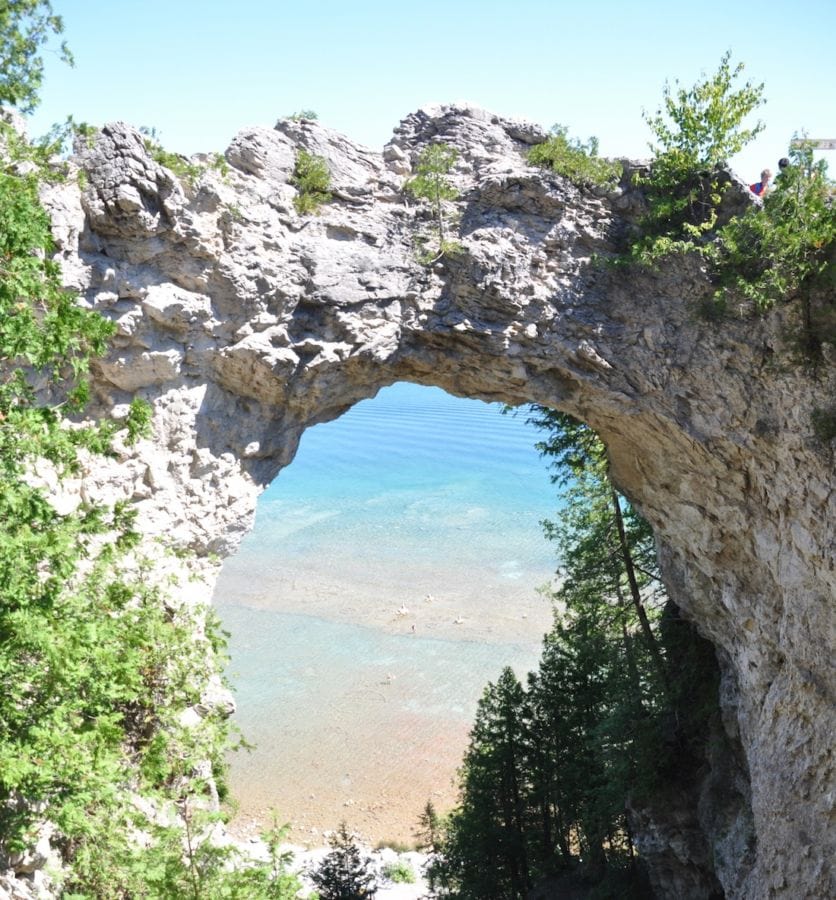 Mackinac’s unique geologic history created dramatic limestone landmarks, the most famous of which is Arch Rock. This rare formation stretches nearly 150 feet above the water. The Anishinaabe-Ojibwa tradition states that this is where the Great Creator blew the breath of life into the newly formed earth. Like Devil’s Kitchen (on the southwestern shore of the island) and Sugar Loaf (1.5 miles north of downtown), this limestone formation was formed over thousands of years by wind, water and receding glaciers. This is a must-stop photo op. 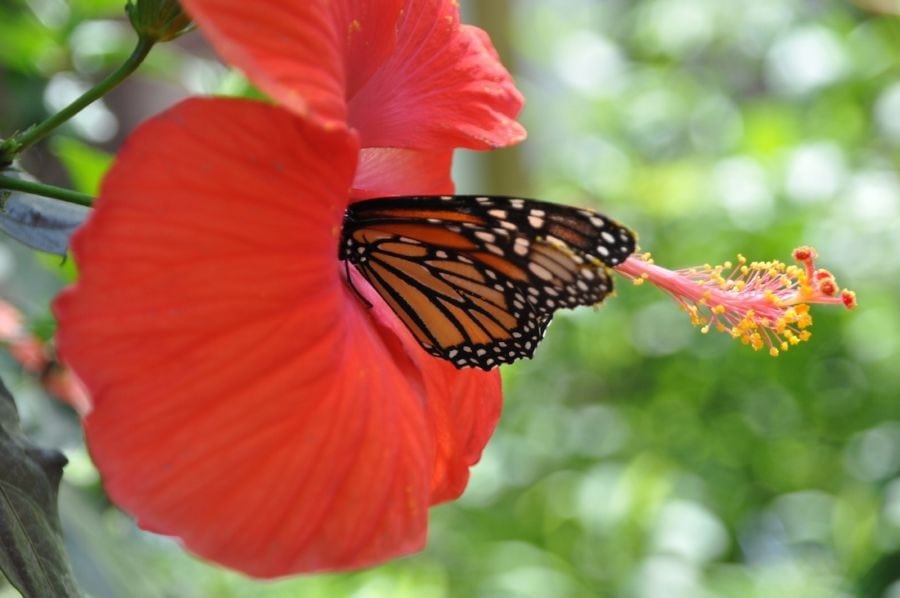 Nothing is more enchanting than being surrounded by hundreds of beautiful butterflies. At one of the two butterfly houses on Mackinac Island you can meander through the enclosed tropical gardens while butterflies flutter peacefully around you. It’s magical, and educational, too; don’t miss the interactive Insect World exhibit for more hands-on learning. You can catch the butterflies at either the Original Butterfly House in downtown or the Wings of Mackinac Butterfly House up-island on Surrey Hill.

Believed to have been the hiding place for English fur trader Alexander Henry during Pontiac’s Rebellion in 1763, Skull Cave is a small and shallow cave on the central heights of Mackinac Island. Skull Cave was once a burial ground but is now part of the Mackinac Island state park. Another great photo stop. 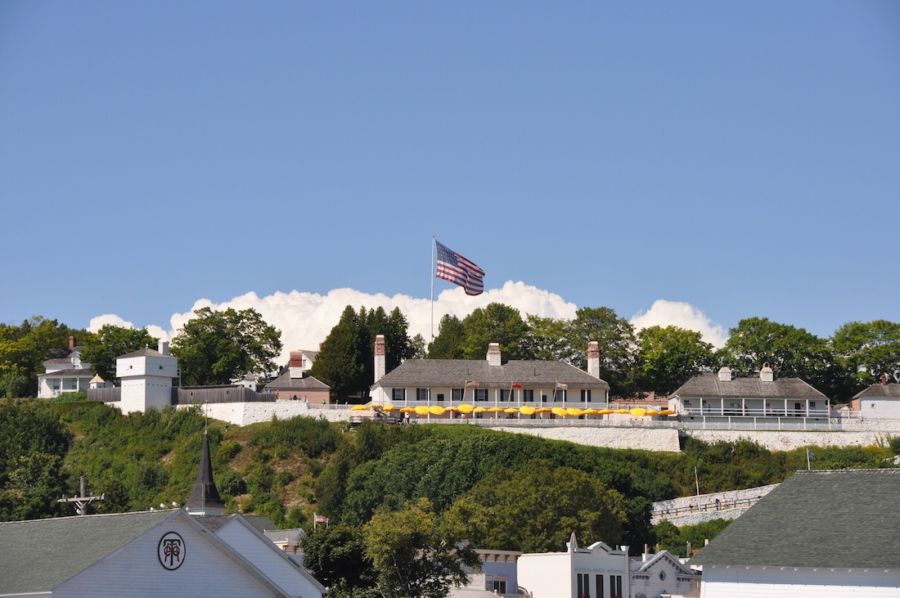 Taking a walk through Fort Mackinac is a trip back to the 19th century. Founded in 1780, this fort is nestled on a limestone bluff that overlooks the island’s village and wild waters of Lake Huron. Listen to the cannon fire or stroll through historic downtown—either way, you’re sure to feel like you’ve taken a trip back in time. And that wigwam in the corner of Marquette Park at the foot of the fort? A birch-bark chapel replicating an original design from 1699. 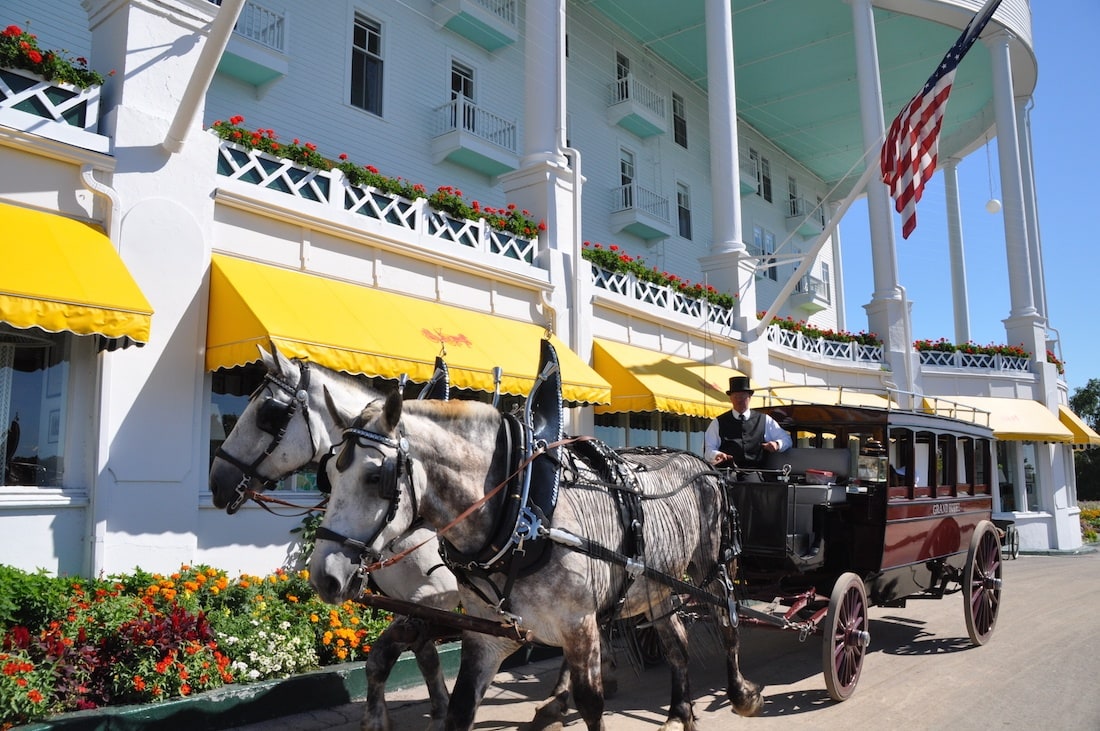 6. Afternoon Tea at the Grand Hotel

Experience the renowned elegance of the historic Grand Hotel by partaking in afternoon tea—a century-old Grand Hotel tradition. Indulge in tea, sherry, Champagne, finger sandwiches, scones and other delights, with live chamber music as the backdrop; $30, plus a $10 admission fee for non-hotel guests. 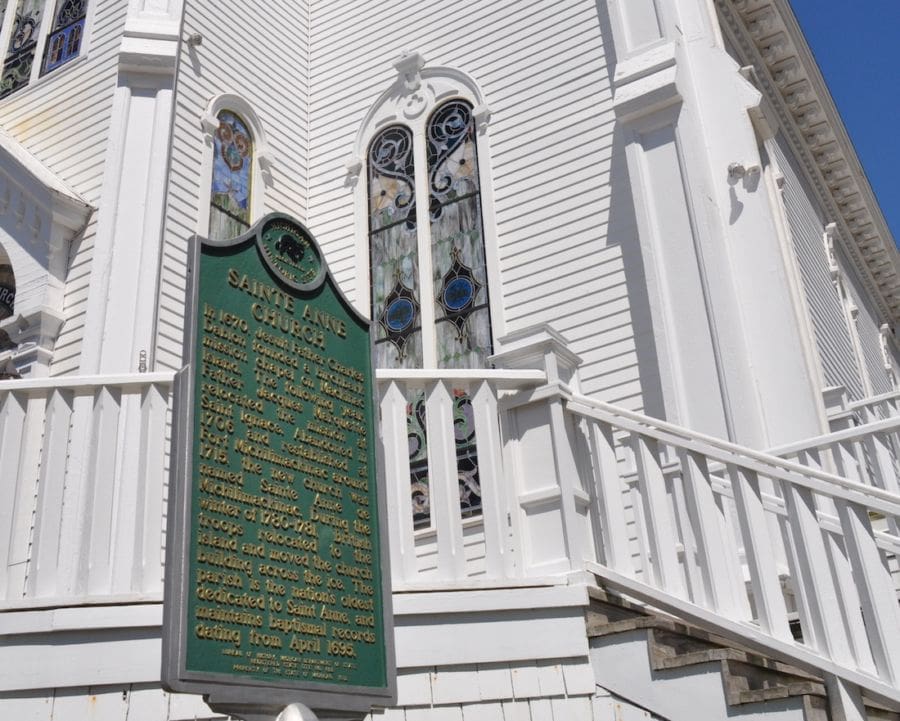 Mackinac’s rich architectural history spans some 300 years —so, no surprise the entire island is on the National Register of Historic Places. A self-guided tour gives a taste of the gems here; highlights include a Native American birch-bark chapel, candy-colored Queen Anne cottages, an elaborate Tudor Revival-style mansion, and, of course, the iconic Colonial Revival-era Grand Hotel. Walking tour guides available online at: MackinacIsland.org. Gotta do it. Candymakers here have been whipping up this sweet confection since the late 1800’s.  Most of today’s vendors still use the time-honored, labor-intensive technique of “paddling” the warm, liquid fudge on marble slabs until it cools.  The island’s more moderate summer climate made it feasible to chill the gooey concoction; the stuff couldn’t solidify further south.  Snag a slice or two in one of many downtown sweet shops. 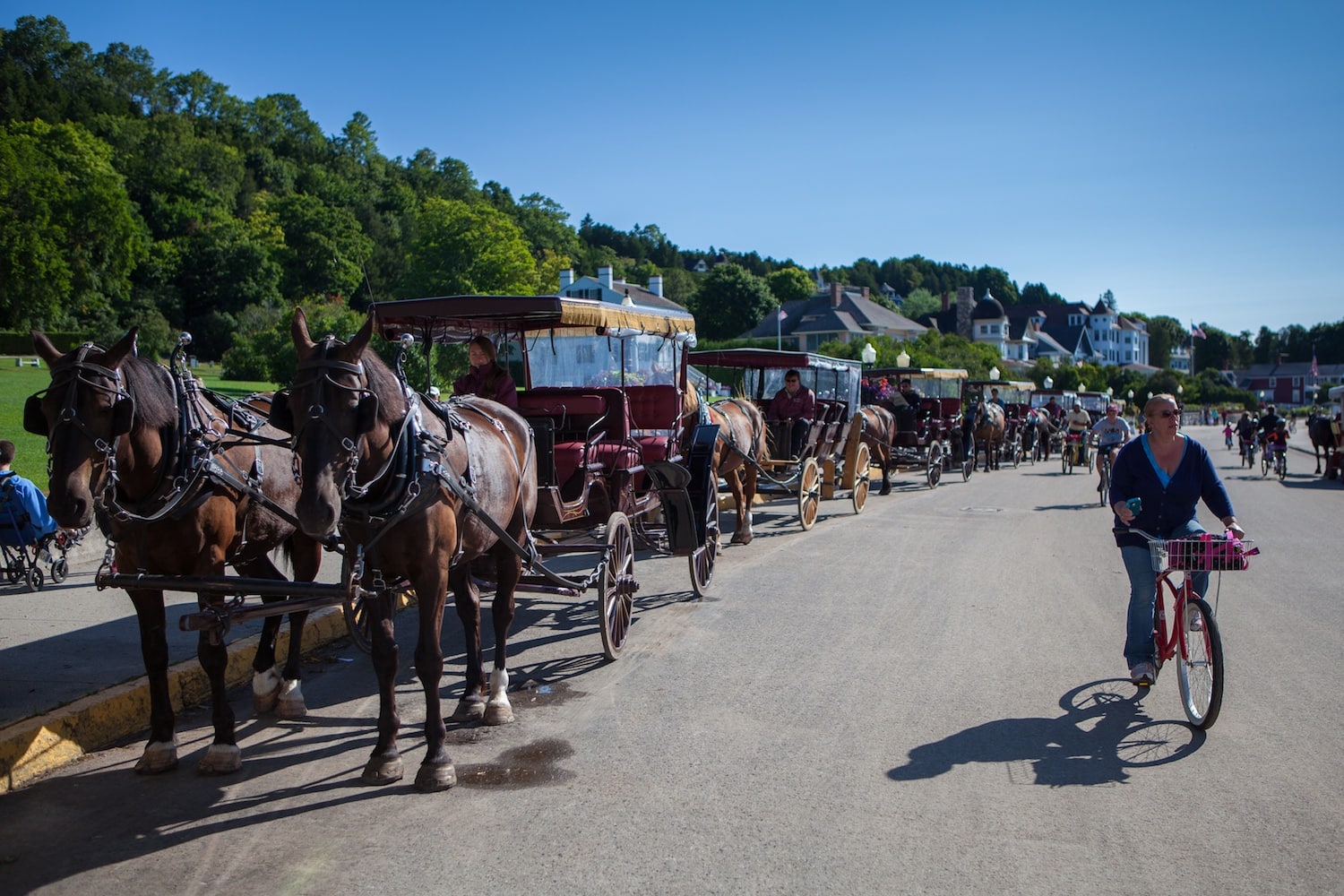 The island’s original ban on cars was looking out for the livelihood of the carriage drivers but it opened the door for bicycle culture to flourish. Pedaling Mackinac’s eight-mile perimeter is a wonderful way to explore the landmarks and drink up fabulous views of the sparkling Straits. If you’re feeling adventures, bike inland through lush forest. 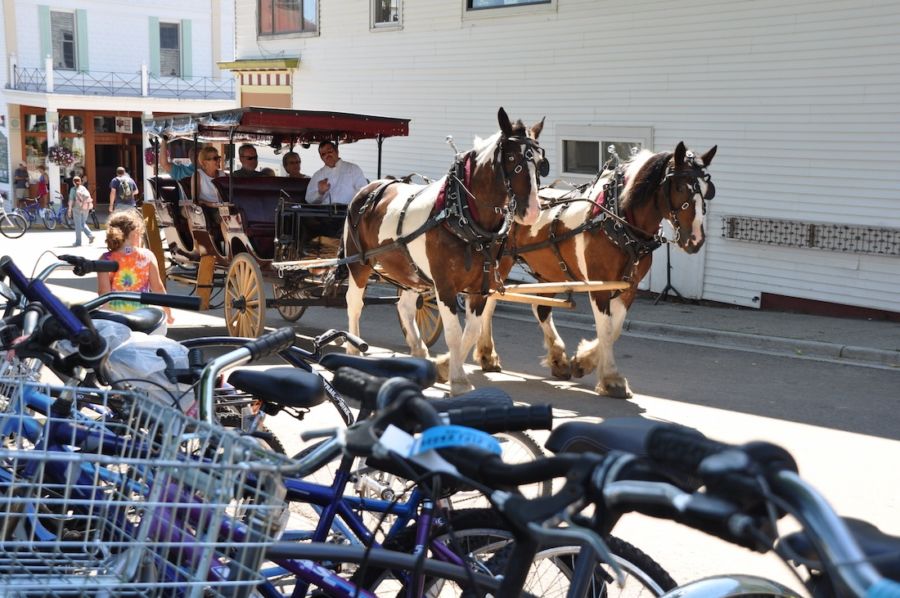 A horse-drawn buggy tour is a quintessential Mackinac experience and a fitting way to view the island’s beautiful Victorian homes. Mackinac Island Carriage Tours, the oldest and largest continuously operating horse-and-buggy livery in the world, offers narrated tours of landmarks and historical points of interest.

Find out where to reserve a carriage ride on Mackinac Island.