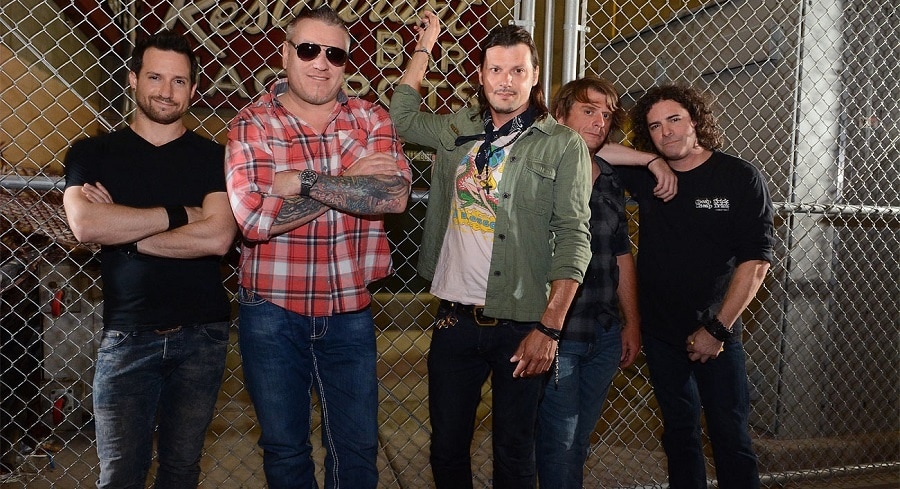 An exciting new Northern Michigan music event is in the works! Smash Mouth, the soundtrack to many a youthful summer, is coming to the Little River Casino Resort in Manistee for an evening of unbridled garage rock, surf rock, and rap with a pop sensibility. MyNorth Media entertainment writer Ross Boissoneau gives a look into the early history of the band as well as more details about their upcoming performance.

When Steve Harwell of rap group F.O.S. (Freedom of Speech) decided to go in another direction musically, his manager introduced him to guitarist Greg Camp and bassist Paul De Lisle. With Harwell’s pal Kevin Coleman on drums, they began rehearsing and named themselves Smashmouth after the football term, later changing it to two words.

The group’s debut album, Fush Yu Mang, was released in 1997 and eventually went double platinum, led by the band’s first major single “Walkin’ on the Sun” as well as “The Fonz” and “Why Can’t We Be Friends,” originally performed by War.

The band avoided the dreaded sophomore slump, with followup Astrolounge boasting three top-ten hits (“All-Star,” “Then the Morning Comes,” and “Can’t Get Enough Of You Baby”) and its sales nearly doubled those of the group’s debut.

Smash Mouth soon crossed over to the film world. “Can’t Get Enough of You Baby,” originally a garage rock classic made popular by ? and the Mysterians, was featured on the soundtrack to the 1998 movie Can’t Hardly Wait. “All Star” and the band’s cover of the Monkees’ hit “I’m a Believer” were key parts of the soundtrack for Shrek; Austin Powers in Goldmember featured the band with Tower of Power’s famed horn section on “Ain’t No Mystery.” Disneymania (2002), a collection of popular Disney soundtrack favorites reinterpreted by contemporary artists, featured Smash Mouth offering a funked-up version of “I Wanna Be Like You” which made it into The Jungle Book 2. The band even made a cameo appearance in the movie Rat Race.

While Harwell and De Lisle have been constants, drummer Coleman left the group due to back problems, and Michael Urbano, Mitch Marine and Jason Sutter were in and out of the band as his replacement. Camp also left and then returned, exiting for good in 2011. Today, founding members Harwell and De Lisle and longtime keyboardist Mike Klooster are joined by a returning Sutter and guitarist Sean Hurwitz, who also was in the band, then out, then back in again. In addition to its work on soundtracks, the band has released seven albums. The most recent is 2012’s Magic.

“Simba, Woody, Gaston, Tinkerbelle, and the rest of the fam join forces to bring you an adorable version of Smash Mouth’s famous ‘All Star.’ There’s nothing like watching Belle sing ‘Hey now, you’re an all-star,’ to a talking clock, is there?” – E Online regarding a video of Disney characters singing “All Star”

“Smash Mouth’s fondness of – and talent for – novelties tends to obscure their other sunkissed gifts, how they have a knack for creating a soundtrack for an endless summer.” – The All Music Guide