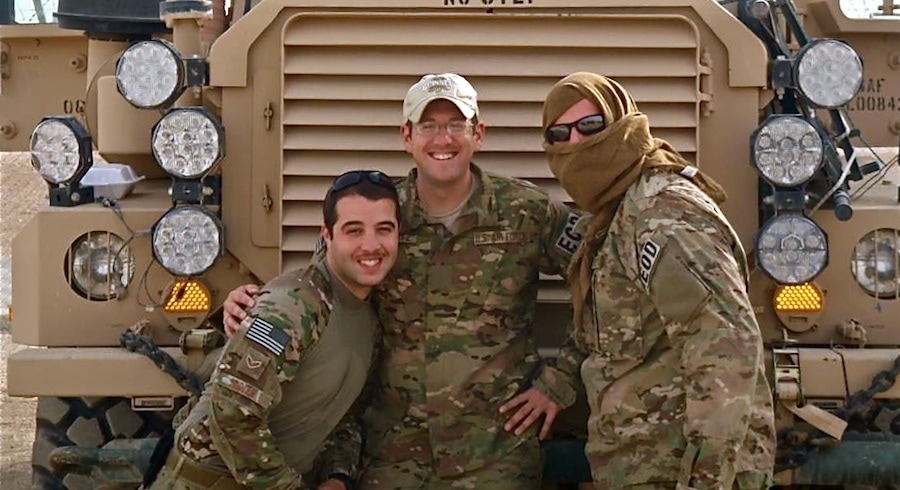 Author Brian Castner was a close friend of Traverse City soldier Mathew Schwartz, and both were experts in disarming bombs. Matthew was tragically killed by a roadside bomb in 2012 on his sixth tour of duty. Below, Castner shares a powerful Memorial Day essay.

A Book, as Requiem
By Brian Castner

Matthew Schwartz was born in Traverse City and died in combat in Afghanistan, and for nine years in between it was my privilege to call him a friend.

No, that’s not right. A “friend” is now a thing we have on Facebook, and that doesn’t begin to describe it. We were both bomb technicians in the Air Force. EOD it’s called, Explosive Ordnance Disposal. It was our job to disarm every kind of munition, from hand grenades to nuclear warheads to the improvised devices that litter our modern warzones. Every time we were downrange and he picked up a block of TNT, my life was in Matt’s hands.

But that’s not all of it either. When back in the states, we were stationed together at a little outpost in New Mexico, nothing but scrub for hundreds of miles in all directions, and our families did everything together. Holiday dinners, picnics, camping trips. His daughters are the same age as my sons, and together they played soccer and rode bikes and went to the county fair. His wife, Jenny, and my wife, Jessie, are like sisters together. Both from little towns on Michigan’s west coast, their names so similar they would answer for each other. We all fit together like puzzle pieces. When Matt got injured during a demolitions accident in Kuwait, I was the one who knocked on Jenny’s door to tell her. And when I was in Iraq, the Schwartz family invited Jessie and my boys over for dinner every night, to make sure they ate as a family.

Listen: when I was in Iraq, they fed my wife and sons.

I got out of the Air Force in 2007, after eight years of service and two combat tours. Matt joined up about the same time I did, but he stayed in and kept deploying. I struggled coming home, beset by post-traumatic stress and memories of car bombs in Kirkuk. Matt stayed in, saw every car bomb that I did, but pressed on to his sixth tour. I tried writing about the war to make sense of it. Matt didn’t give up; he just kept fighting.

I finished editing The Long Walk, my war memoir, a few days before Matt died. My book was published and sold well. I went on television, gave a speech at Yale. I was thanked for my service and pitied for my troubles, but the whole time Matt was dead and I knew everyone was thanking the wrong man.

So I began writing about Matt and Jenny and Afghanistan, a place I knew almost nothing about.

Some might call it survivor’s guilt. I would simply say that the universe was completely out of proportion, and I needed to do some small thing to try to set it right.

I started writing the story of Matt’s death the day he died. I wrote about the funeral, the frigid cold that didn’t stop all of Traverse City, seemingly, from lining the streets from the church to the cemetery, as if Matt were the grand marshal of a welcome home parade held in his honor. I wrote about the sacrifice of his family that loved him, the road that led him to his final patrol in southern Afghanistan, and, ultimately, about the hunt for the men who killed him. In some way I’m still a bomb technician, after all. We’re trained to collect the evidence, find the bomb-makers; I needed to know how we hunted down the jihadists that built the device that killed Matt.

Those were the stories I ultimately told in All the Ways We Kill and Die. Predator pilots, biometrics engineers, contractors, interrogators. Everyone involved in the search for Matt’s killers. Because ultimately I learned this: Matt was my good friend, but the circumstances of his life and death also epitomized the nature of our current conflicts. The more I wrote about his role as a bomb technician, the way he was killed, the reasons he was targeted, the more I was writing about the entire war in Afghanistan. The more I wrote about Matt and Jenny and his girls, the more I realized I was writing about thousands of military families, from thousands of small towns across the country, that lost their sons and daughters to a place most Americans can’t find on a map.

One of those small towns is Traverse City, of course. When Anne and Doug Stanton of the National Writers Series asked me to come back to Matt’s hometown to do a book event, I leapt at the chance to celebrate Matt’s life and to thank the community that so supported him and his family during their grief. I was overwhelmed by the support I saw, during those dark days in January of 2012.

Who was Matt? The man I knew was both a nerdy goofball and a hard-as-nails kick-in-the-door soldier. How to capture both? Because this is also true: all writing is incomplete. Oscar Wilde said books are never finished, they are merely abandoned. Fine for vampire or romance novels, but a terrible burden when you’re memorializing a man you love. I felt a tremendous responsibility, knowing that someday, even decades from now, Matt’s daughters might read the book to find out what happened to their dad. Everything had to be as right as I could humanly make it, even as I knew it would inevitably be incomplete.

So there’s more I need to tell you about Matt. I just heard the story that his mother, Cindy, used to make Mickey Mouse pancakes for him before school, and that when he wanted to travel to New York City with his high school choir, she took a third job to pay for it.

And you need to know that Matt kept a bread machine inside his massive armored truck in Afghanistan, and one day, when his whole convoy got stuck in a sandstorm, he invited everyone inside for steaming hot cornbread.

I heard that one from Greg Swears, a former Army combat engineer who was Matt’s platoon leader in Afghanistan. He contacted me after reading the book, to share more about Matt’s last days. Swears is from Michigan as well, and they would talk about family and canoeing, and hearing Matt’s nasally accent made him less homesick.

There’s more. Swears said that two weeks before Matt died on patrol, he skipped the platoon Christmas party to go to Mass instead. And around the bonfire one night, a Marine officer quizzed Matt for hours, on the proper procedures to disarm every kind of suicide vest and roadside device, but Matt could not be stumped, he knew every answer. And that Matt was a huge influence on Swears, taught him how to spot an ambush, taught him to trust his gut and not his gear, taught him how to truly care for his men.

But that’s not all of it either.