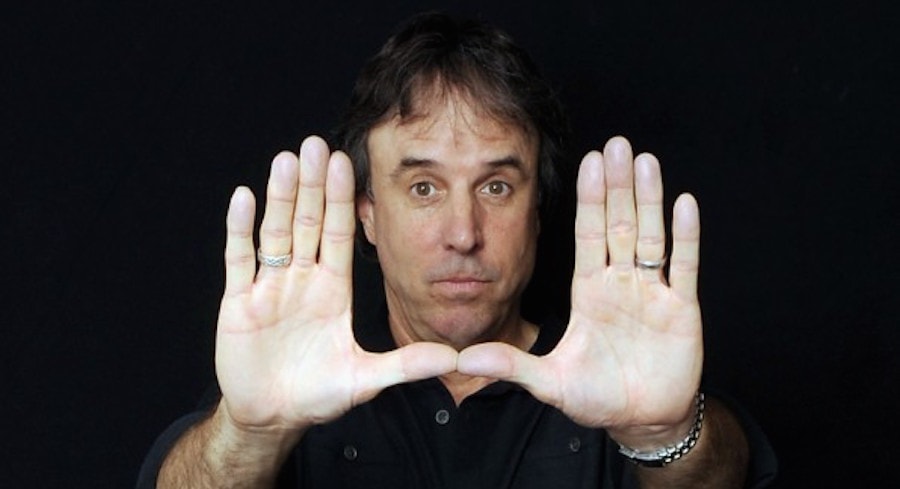 Former Saturday Night Live star Kevin Nealon comes to Traverse City for a performance at the City Opera House on May 19, 2016 at 8:00 pm. MyNorth Media entertainment writer Ross Boissoneau tells us more about the upcoming event.

Kevin Nealon didn’t set out to be a comedian. It was music that first drew him to the stage, playing guitar and singing. “I always wanted to be in a band,” he said. While performing in coffeehouses, he found himself telling jokes between songs. When they started getting a better reception than the music, he figured he was on to something. “I’d read the jokes in the back of Parade magazine, then personalize them and string them together.”

Nealon ultimately decided he was more cut out for comedy than music. “Music is so difficult to make a living at,” he said. He believed comedy offered a better economic opportunity, as it’s a single performer rather than a member of a band. Besides, there were all those jokes in Parade. So he started studying the craft and going through TV Guide to see who was performing on which show. “I’d circle every comic, then watch them.”

Upon first landing in Los Angeles – with a marketing degree, no less – he set out to perfect his comedy. “The first couple years in LA I kind of lived at the Improv,” he said of the well-known Hollywood comedy club. Today he’s a veteran of comedy clubs, television shows, movies and more. “I came from doing everything – TV, films, standup, and having a family. I talk to a lot of young comics and it (their standup comedy) is all they have.”

His big break came when he was added to the cast of Saturday Night Live, where he stayed for nine years, bringing to life characters like muscleman Franz (of Hans and Franz with his pal Dana Carvey), Mr. Subliminal, and serving as the host of Weekend Update. He’s also starred on Showtime’s Weeds and in many of fellow SNL alum Adam Sandler’s movies. In addition to his onscreen roles, hosting gigs and standup routine, Nealon has written a book, Yes, You’re Pregnant, But What About Me? He’s also starred in commercials for Charter Cable and the prescription drug Xarelto, the latter stemming from his own experience with atrial fibrilliation. While on vacation with his wife in Mexico, he started having heart palpitations, and landed in the hospital. He ended up having to be shocked back into sinus rhythm.

When he was 7 or 8 he used to love pranks like melted ice cream or fake vomit that you would put on your mother’s couch. He’s come a long way since then. Nealon made his network TV debut in 1984 on The Tonight Show Starring Johnny Carson, a huge career milestone.

Nealon was attending a play starring a friend in New York, got bored and checked his e-mail a few times, then went backstage afterward to say hi. “Did you get any good messages?” the actor asked. “I’ll never do that again.” – Kevin Nealon

“Hey, man, that was really good. Stay with it. Stay with it.” – George Carlin to Nealon after Nealon had performed at an open mic early in his career.

Tickets are at $38. Go to CityOperaHouse.org.