The Fleece Blanket, an Essay 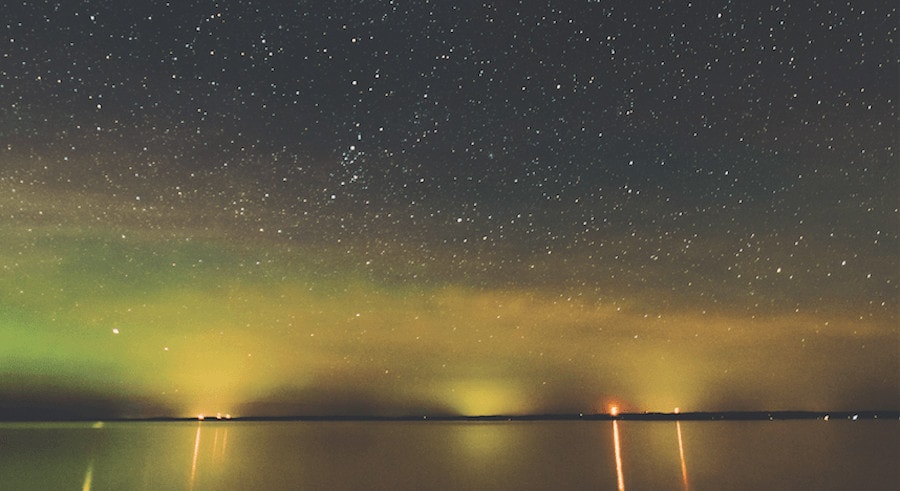 Kandace Chapple’s really ugly fleece blanket was more than just a blanket. Read on for her heartfelt essay, originally published in the May 2016 issue of Traverse, Northern Michigan’s Magazine.

We took the kids out back several nights last summer. Spread a big blanket in the yard, a huge fuzzy one from the flea market in Buckley. I picked it out after seven years of not picking it out.

The blanket was the kind of thing my mother would have bought over my dad’s protests. She would have said just two words, Oh, Barry! and the fight would be over.

So for seven years I walked the flea market without her. Before that, my mother and I had walked the stalls together and bought an entire theme of John Deere items for Kendall’s baby room. He would have a tractor theme of yellow and green, even if his daddy did drive an orange Kubota.

And for seven years, I walked the flea market instead with my dad. And each year I picked up a John Deere item, started to say something to my mother, then put it back down.
Finally last summer, I bypassed the John Deere items and set out for the blanket stall.

“We’re getting one this year,” I told my husband, Tim. Each year I threatened to get one. Each year I didn’t. They seemed too big and too bawdy and too much without my mother.
We went by the blanket stall once, then twice. Finally, Tim asked, “Well, are we?”

And we went back a third time and entered the rows of loud fleece blankets. My father idled outside at the edge while I assessed every one. Stars, moons, pandas, zebras. The kids ran through the maze of hanging blankets screeching and happy.

“Find a cat one,” was my only direction to them. My mother had given me a fleece cat blanket for my 14th birthday. It had been lost somewhere in the move from my mother’s home to my home with my husband in 1996, the same year my favorite kitty died.

We turned down blue ones and orange ones and quiet ones. We took our time and found every cat one. Three of them. We settled on one with a dozen cats of every color. It was the closest to the one I had lost from my childhood. The blanket was borderline hideous, but they all were. I wanted that blanket. It felt like my mother.

My father looked at me, a small laugh, “Really, Putz?”

My nickname from childhood. I laughed too and paid the man working out of his trailer the $45.

But I made Tim carry the big plastic block through the market. I enjoyed the bag maybe more than the blanket at that point. It was a riot, an obvious sign to all—yes, we had bought one of those blankets.

But I couldn’t carry it. The blanket, brand new, hadn’t felt like I thought it would. There was no satisfaction in the purchase. It wasn’t enough, it wouldn’t be, without my mother.

At home, I climbed under it in a t-shirt and shorts in the heat of August, sweating, determined to like it, hating it. It was nothing like my old blanket and never would be.

Finally, I gave up. I folded it, 3,000 folds necessary to get it to a manageable size, and stuck it in the corner of the room behind the armchair, too big for a closet.

Then one day while the boys played on the swing set out back, I thought it would be a good afternoon for a picnic. I dug out that cat blanket, both arms scooping it up and spreading it out, one trip. The second trip I brought water for three. The third trip, a box of crackers and a block of cheese, a paring knife and a plate. On the next and final trip, my book and a pillow.

The blanket was big enough to camp on and so we did. I spread it out in front of the swing set, called the boys in for snacks, sent them back out to swing again and read my book. The fluffy fleece behind my legs and back felt fine in the afternoon shade with the new cat curled up next to me.

It was a start.

Days passed like this. We got into the routine of spreading the blanket out, the grass so thick and green that year that it could push peaks into the deep fleece. It was a comfortable nest, a square summer getaway.

Finally in early September, it happened. The blanket was out on the porch where I had forgotten to fold it into sub- mission. And when I went outside to do so, I noticed the millions of stars above.

“Get out here!” I called to Tim and the boys. We found stars and constellations and, later, stories and memories.

We walked into the darkness, spreading the blanket out and finding there was plenty of room for all four of us on it. We shared the sky with no one. Our 12 acres always perfectly still and always perfectly ours. We stretched out and stared up. The longer we looked, the more we saw.

We found stars and constellations and, later, stories and memories.

We stayed like that, four on the blanket, in the dark, late. Soon the giggling started. We didn’t talk about the stars anymore, instead we talked about things we couldn’t see, things in the night. One of us would hiss, “Did you hear that?” and we’d all sit rock still, our ears bursting with effort. And then the stories and screeches would start, filling the maples and oaks and pin cherries with laughter.

We stayed out later and later, even as the grass grew wet with dew around us and our noses grew red with cold. We just huddled tighter on that fat fleece blanket, held together and our hearts pounding, warm and close. A foursome, a family. Finally, the blanket felt like my mother.

This essay by Kandace Chapple was originally published in the May 2016 issue of Traverse, Northern Michigan’s Magazine.
Subscribe here.