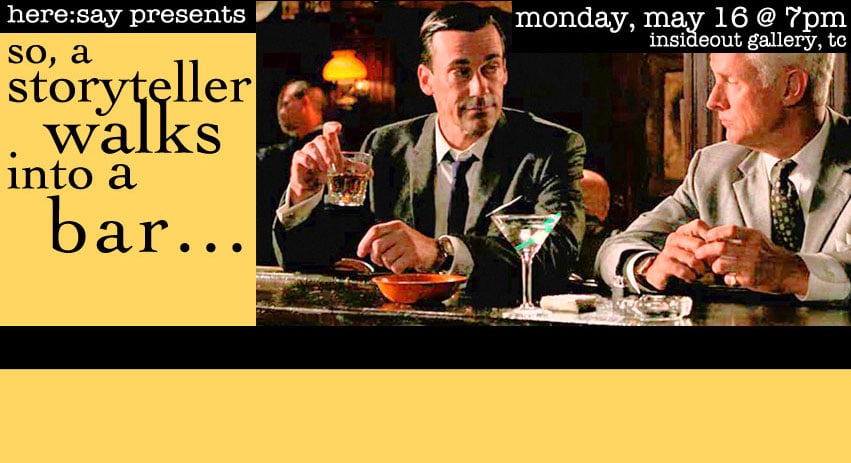 For those who haven’t been, the format of the Here:Say Storytelling event is eight people (give or take) have 10 minutes each to tell a true story based on the night’s theme. Beverages available; takeout food welcome. Know this: HereSay is good, stout, strong, memorable. You owe it to yourself to check it out.

Clue us in on the evening’s theme. Where did that evolve from?
“So many stories happen in a bar. Liquor has that special effect. It loosens up some of us. Makes some of us hostile. Leads to interesting connections. It just seemed like a great social space from which to draw stories. Early on I had wanted it to be all bartenders, but when I approached some, none of them wanted to speak in front of a crowd with a microphone. I started to wonder if there was some kind of bartender HIPAA thing that makes them keep everything confidential.”

The title suggests comedy …
“Well, yes, this particular title does suggest it will be all jokes. But no, it’s not a standup comedy show. It will not be all jokes. Most shows are a combination of humor and serious. A person approached me one time and said he prefers more funny stories, to which I said, ‘Life isn’t always funny, and these are stories about life.’

“I never really know what to expect a theme will pull from people, truth be told. In our February 2016 show, the theme was ‘Forbidden.’ And I expected all sex, drugs and rock and roll, and instead people went really deep. There was a story about a suicide attempt, a story about an inappropriate relationship, a story about medical complications. But I will say the ‘Awkward’ show had people laughing a mile a minute.”

I think people appreciate a mix of humor and serious. How does that work?
“Many of us deal with hard things by making jokes. Even if I’m telling a serious story, I find space to crack a joke. But if you are going to take a serious story and include something funny, it’s important that it doesn’t minimize the serious thing. It’s that balance about finding what’s funny without undercutting what isn’t funny.”

Share a little bit about what we can expect Monday night. Toss us some teasers.
“Well, hmm. It’s really hard to do that without spoiling a story. But I can say all the stories are really different, and to me that’s one of the most exciting things about Here:Say Storytelling. You take one theme, and they all share that one theme, but the stories are all so different. They’re not all, ‘We went into a bar and got drunk and mad capperie happened.’ There’s a nice range of ages too.”

Note: Though this show ends the regular season, special shows are being discussed for summer. Check the Here:Say Traverse City Storytelling Facebook page for details on events like the Up North Pride show, June 20.