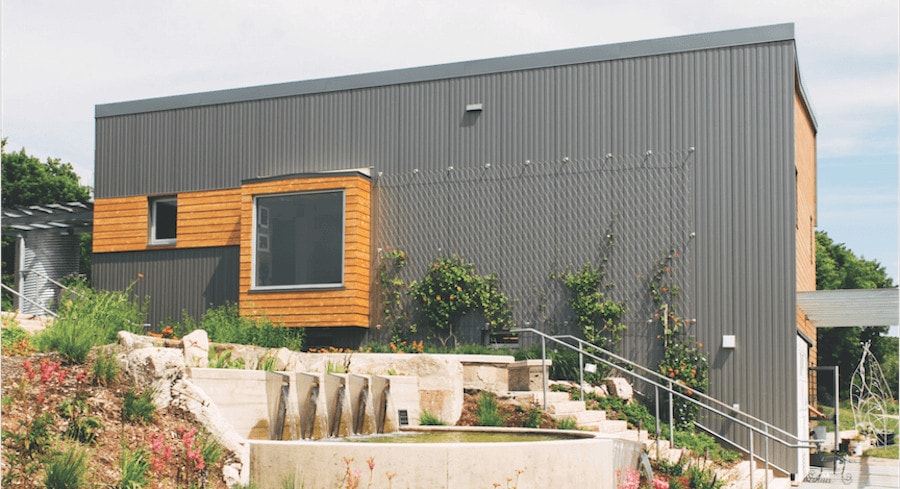 How does their garden grow? With persistence, endurance and resoluteness. Come inside the nearly 20-year journey of the Traverse City Botanic Garden at Historic Barns Park.

Planning and creating a garden takes research, organization, patience, perseverance and, perhaps most essential, a deep love and respect for the wonder of nature. That applies whether your ultimate goal is a 10-by-12 foot plot in your own backyard or, way at the other end of the scale, a 26-acre plot in a whole community’s backyard. In this case, the community backyard is the Grand Traverse Commons—for nearly two decades, the place at the heart of a dream to build a grand botanic garden worthy of the region’s natural beauty.

So, we can’t help it. We need to play the garden metaphor here … the garden planners have had a tough row to hoe … imagine planting the seeds of that dream in land whose acquisition was as hard as a bed of clay … seeing a sprout of hope after several years only to have it plowed under by a new land-use ruling … and ultimately having to wait 15 years to see the fruits of your labors finally begin to bloom and grow. But there was never any doubt in the minds of the project’s champions that they would someday see the garden become reality, recalls Karen Schmidt, board chair and acting executive director of the Botanic Garden. 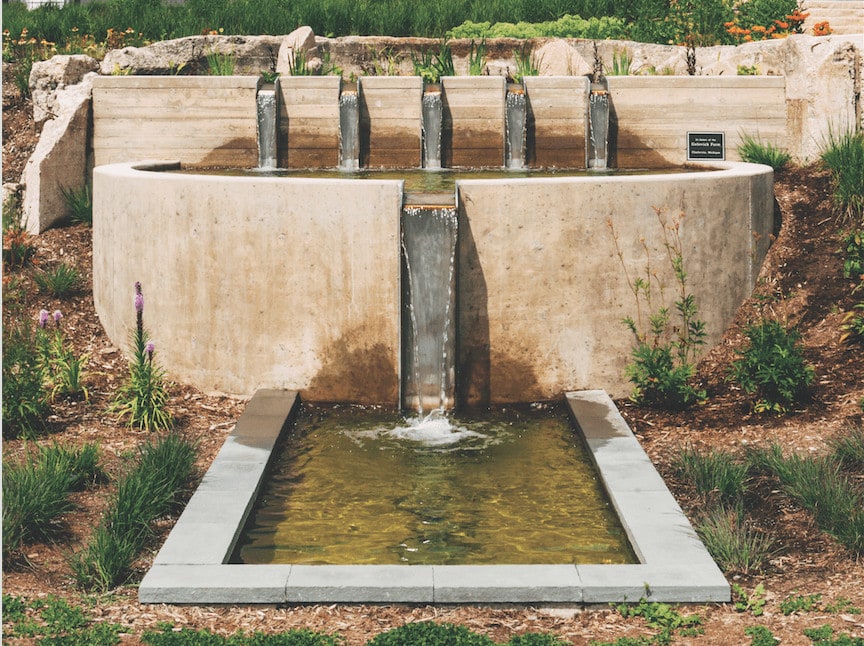 The saga begins in 1999: That year, the local Michigan State University Extension did a survey of 1,700 households in the region to see if there was any interest in a botanic garden at the Commons, an extensive piece of land that had long been slated for redevelopment. The survey came back in strong support of a garden, but an organization was needed to pursue that mission, and in 2000, the nonprofit Botanical Garden Society of Northwest Michigan was formed to do just that.

After an entire year of negotiations with the then-owners of the property, the Grand Traverse Commons Redevelopment Corporation (GTCRC), the society received approval to purchase a parcel on the grounds that included the power plant building and 20 acres behind it. Their joy was short-lived, however, because the same day the approval went through, the DNR changed the status of those 20 acres from plantable to wetlands, and the whole deal fell through. The society spent the next five years looking for other sites, and even did a feasibility study on one, but the word that came back from the public was, “We really want you at the Commons.”

Remaining resolute, the team refocused. One hitch was that part of the Commons property was in the City of Traverse City and the other part was in Garfield Township. The solution: forming a joint recreational authority in 2003, and in 2004 passing a millage to purchase and remediate the property, which included the historic barns. After another four years, in early 2008, the Recreation Authority put out a request for a proposal to local non-profits to manage various parts of the property, and the Botanical Garden Society jumped right in, although it took two more years of negotiation to obtain management rights. Three years of fundraising followed. And that was when the cooperative spirit that has become the hallmark of the entire project really kicked in. “The Recreation Authority was going to do a capital campaign, and so were we, so we said, “Let’s do this together,” says Schmidt, who has been a member of the Botanic Garden Society since 2001. By late 2010, the two organizations had raised $1.6 million, which was split between them. “They used their half to renovate the Cathedral Barn, and we used our half to begin work on several elements of the Botanic Garden, including transforming the old granary into the current Visitor Center,” Schmidt says. Internationally renowned landscape architect firm Nelson Byrd Woltz was hired to draw up the original master site plan, and Traverse City architect Ray Kendra was chosen to design the buildings for the garden. Further design work was made possible by the largest gift to the Botanic Garden to date, from local residents Anne and Robert Tucker. 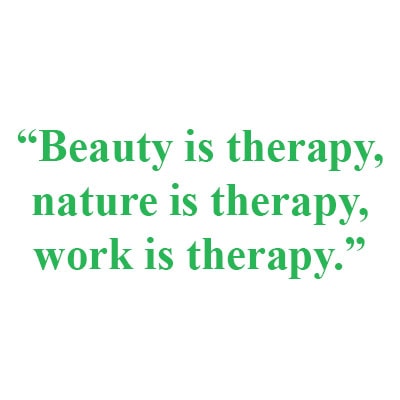 Thanks to the tenaciousness of its founders and supporters, the Botanic Garden has finally taken root. But to help you understand the whole story, we must take you back—way back—to the late 1800s, when a man with a vision, Dr. James D. Munson, arrived in Traverse City to assume  the position of medical superintendent of the newly opened Traverse City Asylum,established in 1885 on the grounds of what is now the Commons. Dr. Munson, a graduate of the University of Michigan Medical School who became a respected specialist in mental health disorders, brought with him a treatment philosophy that was radically different from what was being practiced elsewhere.

A compassionate man, he did not believe in straitjackets and isolation. What he did believe in became the mission statement for the asylum: “Beauty is therapy, nature is therapy, work is therapy.”

Dr. Munson practiced what he preached, bringing back hundreds of different species of trees from his lecture travels around the world and planting them around the asylum grounds to create more pleasant and calming surroundings for the patients and staff. “But he didn’t stop there,” says Mike McNulty, the Botanic Garden’s Visitor Center manager and unofficial historian. “He also established a farm on the property that furnished all of the meat, fruit, vegetables and dairy products for the entire complex.” Many of the workers who helped out on the farm and at the asylum were patients. Having a job was part of the sense of purpose that Dr. Munson felt was so important to healing. The farm ceased operations in the 1950s, and the asylum (eventually named the Traverse City State Hospital) closed in 1989. 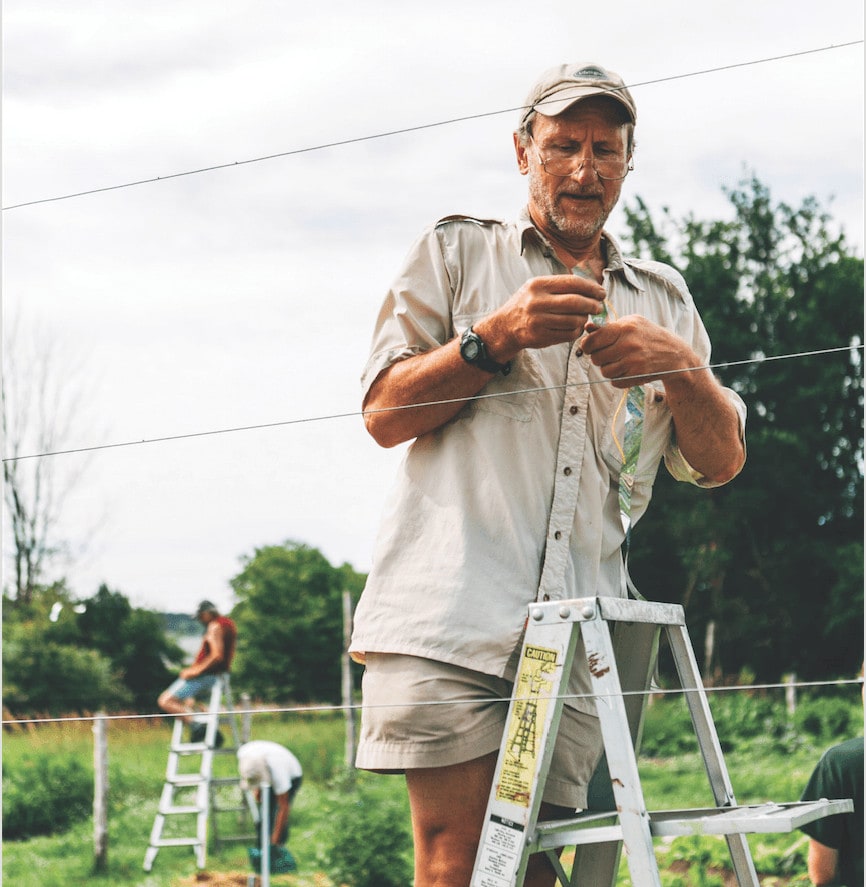 Back to the present—and the future: Dr. Munson would surely approve if he could see his old asylum grounds today. Several of the original buildings, which had for years been in a state of decay, have since been resurrected and renovated by the Minervini Group, creating the Village at Grand Traverse Commons, a thriving residential and commercial neighborhood. The adjacent medical complex that bears the name Munson Medical Center celebrated its 100th anniversary this year. And the Botanic Garden now sits on the same land that the asylum farm once occupied, just a stone’s throw from the campus lawn where Dr. Munson planted most of his trees and which is now a registered national arboretum.

The Botanic Garden Visitor Center opened for its first season on April 1, 2014. Sleek and modern on the outside and in the upper-level meeting and event room, the center’s lower-level reception desk and gift shop echo the building’s granary past with the original stone walls and a gated tunnel that leads to what was once the farm root cellar. The root cellar itself now sits below an open-air pavilion that can be rented for special occasions, and two old silo foundations have been converted into a conversation circle and a three-tiered waterscape surrounded by native plants.

“We have used a lot of native plants throughout the garden, not only because we want to keep it local, but also to support the abundant wildlife on site, including 114 species of birds,” Schmidt says. The gift shop offers a free list of birds that people can take along as they hike the grounds, checking off the species they see. 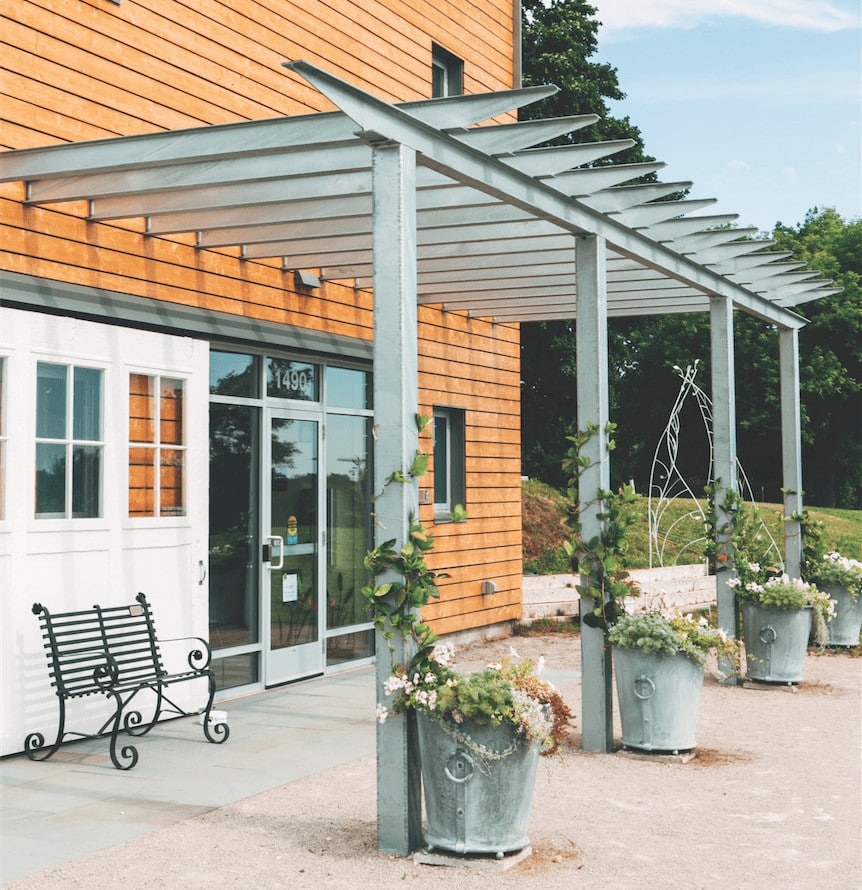 A large deer population is also part of that abundant wildlife. And one Botanic Garden project that is slated to be completed this summer, the Walled Garden—formerly a horse barn—is designed to fend them off, for a very good reason: “In addition to masses of perennials and shrubs, we planted 2,500 bulbs there, including tulips, which we haven’t been able to have outside anywhere else before, other than in containers, because they are basically deer candy,” Schmidt says. The intricate iron gate at the entrance to the Walled Garden, designed and forged by local artist-blacksmith Dan Nickels, gives a nod to the site’s original purpose with the incorporation of equine-themed motifs. (Nickels also created the tunnel gate in the Visitor Center gift shop.)

Perhaps the most immediately visible new feature this year will be the new plantings that herald the beginning of the Sugar Maple Allee. When finished it will be the backbone of the garden, with a series of interconnected paths leading to all other areas. The allee, a long promenade lined by a double row of trees, will eventually extend as far as the labyrinth to the north and the Cathedral Barn to the south, while 10-foot-wide flower beds on either side will showcase 6,000 square feet of everything from early spring bulbs to perennial geraniums. “It will be a huge pop of color,” Schmidt says. Benches along the Allee will allow visitors to linger and enjoy the seasonally changing spectacle.

Studies have shown that public gardens have a powerful and positive impact on the health, environment and economy of a region, making it a better place to live. “This is being built as a place to energize your soul and body,” Schmidt says. In that spirit, the tenets that guided Dr. Munson’s professional life inspired the words chosen by the Botanic Garden founders to sum up what it represents: healing, education, beauty, recreation, balance and history. 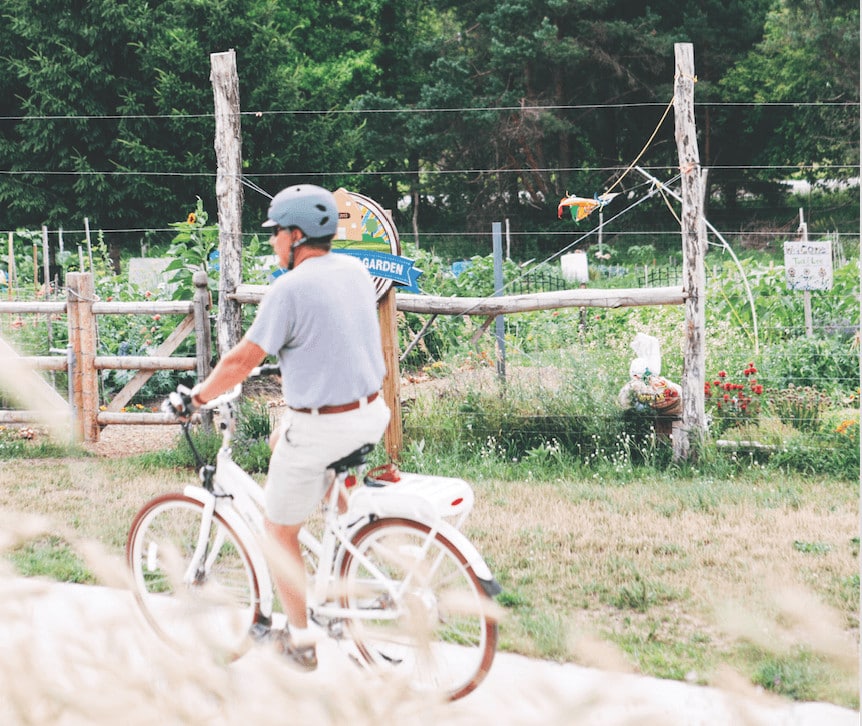 Healing is a major element for Botanic Garden leaders not only because of the asylum history of the site and that it is near several medical facilities, but also because the team understands the healing properties of being in surroundings like this. “Some of the individual gardens will be specifically healing gardens, like the Native American garden (medicine wheel) and the pharmaceutical garden,” Schmidt says.

Education is another key component of the garden. “That piece filters down through everything else,” says Schmidt, “including educating people about this place, the healing properties of the gardens, how to grow and maintain plants, or how to be stewards of the land. But we also want people to come here and just have a good time, whether it’s to sit down and read a book, take an art or gardening class, have a party or a picnic, attend events or use the trails surrounding us, which also hook up with the TART trail, to go hiking, biking, cross-country skiing or snowshoeing—that’s the recreation component.” 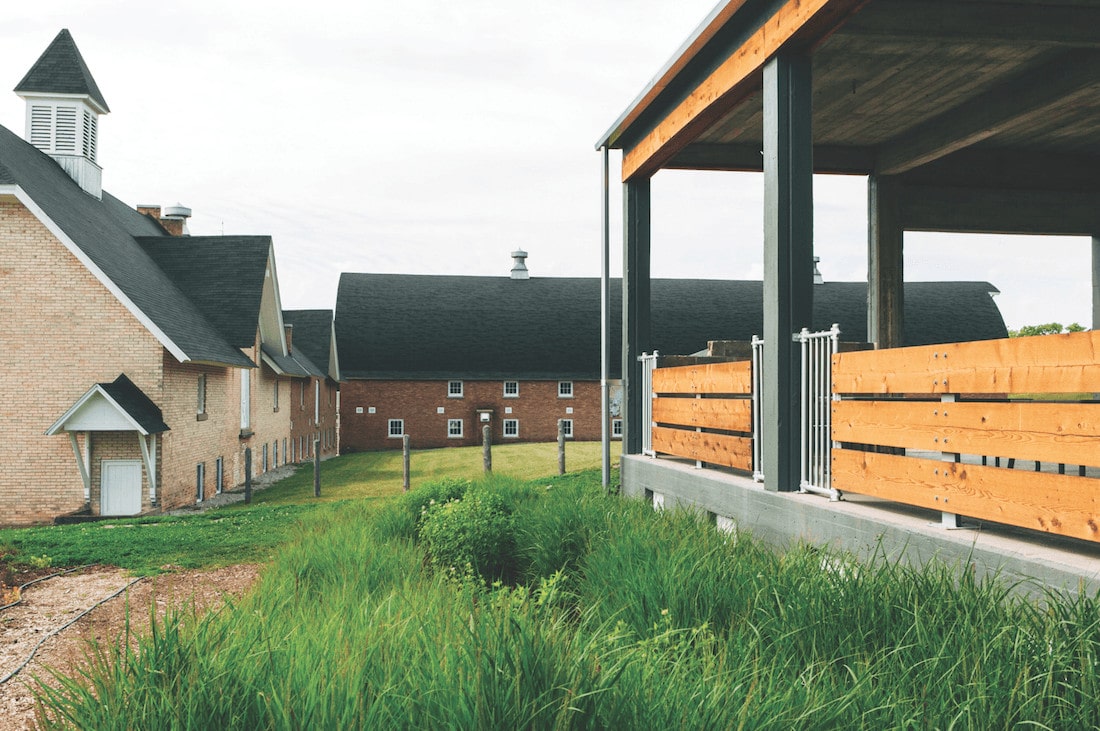 As for the beauty and balance aspects, Smith says those two aspects are innately intertwined, and also echo the education element. “We use the word ‘balance,’ but what it means is environmental sustainability. That’s a real passion for us. We want to model and teach people how they can make adjustments in their lives by doing less damage and protecting the earth more. But we also want this to be a really beautiful place, so whether we’re following LEED building standards, installing solar panels, using a cistern to collect rainwater, growing things organically, or recycling and repurposing materials, we want to make sure it looks beautiful. We want people to understand that you can have both beauty and sustainability. The thousands of annual and perennial flowers we have planted and will continue to plant will be an obvious expression of beauty, but even the native plants don’t look like just a field of weeds—they look like a beautiful garden.”

And the rest, as they say, is history—not only in the past, but in the making. As a quote on the Botanic Garden’s Facebook page says: “No one plants a garden for today—they plant it for the promise of tomorrow. Gardens are hope made real.”

The Traverse City Botanic Garden at Historic Barns Park is situated on the grounds of Grand Traverse Commons, 1490 Red Drive, Traverse City. To book an event or find out more about classes, tours or other activities, visit www.thebotanicgarden.org or call 231.935.4077.

This feature was originally published in the May 2016 issue of Traverse, Northern Michigan’s Magazine.
Subscribe here.