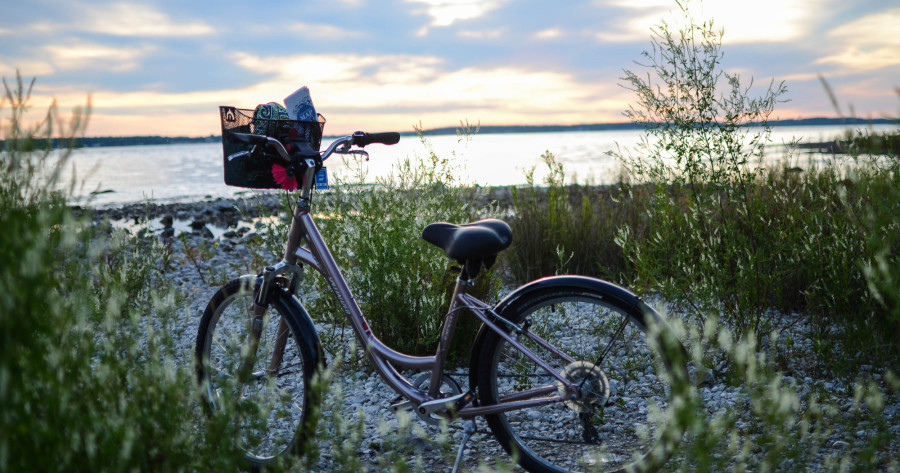 Biking on Mackinac Island is one of the island’s best attractions and an integral part of a Northern Michigan vacation. You can either bring your own bike over on the ferry for a small fee or rent a bike when you get to the island (see below). Bikers will find over 70 miles of paved, road-friendly path and bona fide mountain bike trails. Bikers won’t find cars! Yep, you read that right. Automobiles have been banned from Mackinac Island since the last century. Beyond weaving around horse apples in the road (carriages are allowed on the island!) biking on Mackinac Island is a pedaler’s dream.

Watch this MyNorth video about biking on Mackinac Island to see just how amazing it really is.

Biking Around the Island

Most Mackinac Island bikers stretch their legs by touring the Mackinac Island shoreline path known as Lake Shore Boulevard. The eight-mile main loop, is, after all, Michigan’s only state highway that’s absolutely automobile free. Deep blue Lake Huron is your companion on this gorgeous ride, and the mighty Mackinac Bridge will be in your sights part of the way.

Once you’ve mastered the shoreline loop, it’s time to head into the Mackinac interior. You’ll be amazed at how much there is to see, even if you are on a road bike. Pump your way up the bluffs for your own two-wheeled tour of stunning early last century cottage-mansions, then steal into the forest to quiet back roads. For a woodsy escape, ride up the center of the island, past Fort Mackinac, to Garrison Road. Be ready to pop the kickstand and ramble around historic sites; along the way, you’ll come across old stone-walled Protestant and Catholic cemeteries, Skull Cave and the battlefield-turned-golf course, Wawashkamo. Garrison Road dead-ends at Lake Shore Boulevard, where you’re treated to a panorama of the spectacular five-mile Mackinac Bridge that links Michigan’s Lower and Upper Peninsulas.

Bike Mackinac Island’s southeast lobe to spot some of Mackinac Island’s most famous features including Arch Rock, a stand of fragile brecciated limestone that is a popular photo-op. Several winding bike trails and carriage roads—most of them paved—lead back to another famous limestone tower: the pockmarked and craggy Sugar Loaf, a ritual burial site of the island’s early Native American inhabitants, juts up 75 feet into the air at a horseshoe in the pathway.

Saddle up to discover Mackinac Island’s extreme side on a mountain bike. Keegan Myers, a Northern Michigan extreme sports enthusiasts and co-owner with his brother, Matt, of M22, says that Mackinac Island is made for a mountain bike:  “The trails on the island are almost endless. Our favorite ones are at the highest elevation—along all of those bluffs. They are really good, technical trails. These aren’t 4-foot wide pampered trails; sometimes there’s a 500-foot drop right next to the trails. They’re all tight single track. Lots of rocks.” Adds Matt Myers: “You get some really nice views of the bridge and the lake from that elevation.”

For a map that includes both paved and unpaved bike trails on Mackinac Island go to MackinacIsland.org.

On Mackinac Island you can rent just about any type of bike you can dream up: from single speeds to 10 speeds, beach crusiers, tandems, mountain bikes, bikes with tagalongs and bikes with child carriers. You’ll also find electric Amigos and adult strollers.