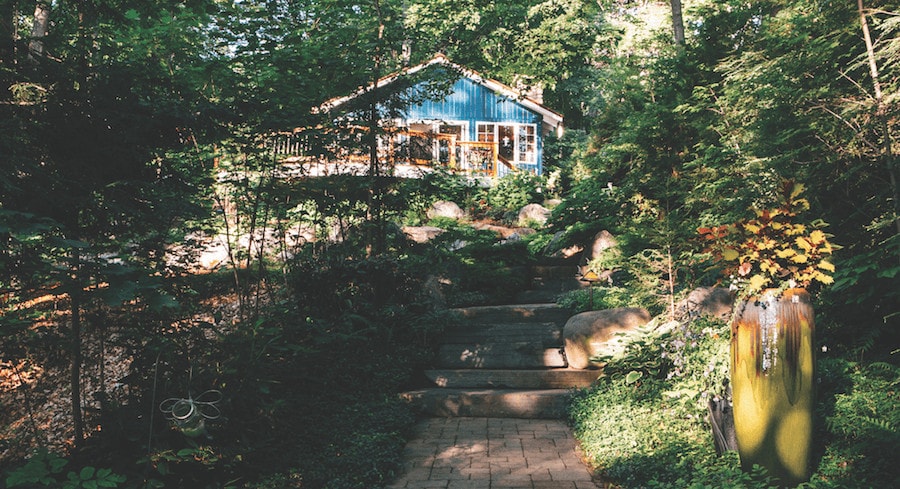 Charles Robinson grew up playing in Walloon Lake and, as an adult, built his home/landscaping business in nearby Boyne City— close to, but not on, the lake. Eleven years ago he and his wife, Cheryl, made their longtime dream come true with their purchase of a cottage on Walloon Lake’s West Arm. As far as the Robinsons were concerned, the fact that it was just five miles from their home only made it easier to get there. Summers packed with fun at the Walloon Lake cottage were about to begin for this family of five. 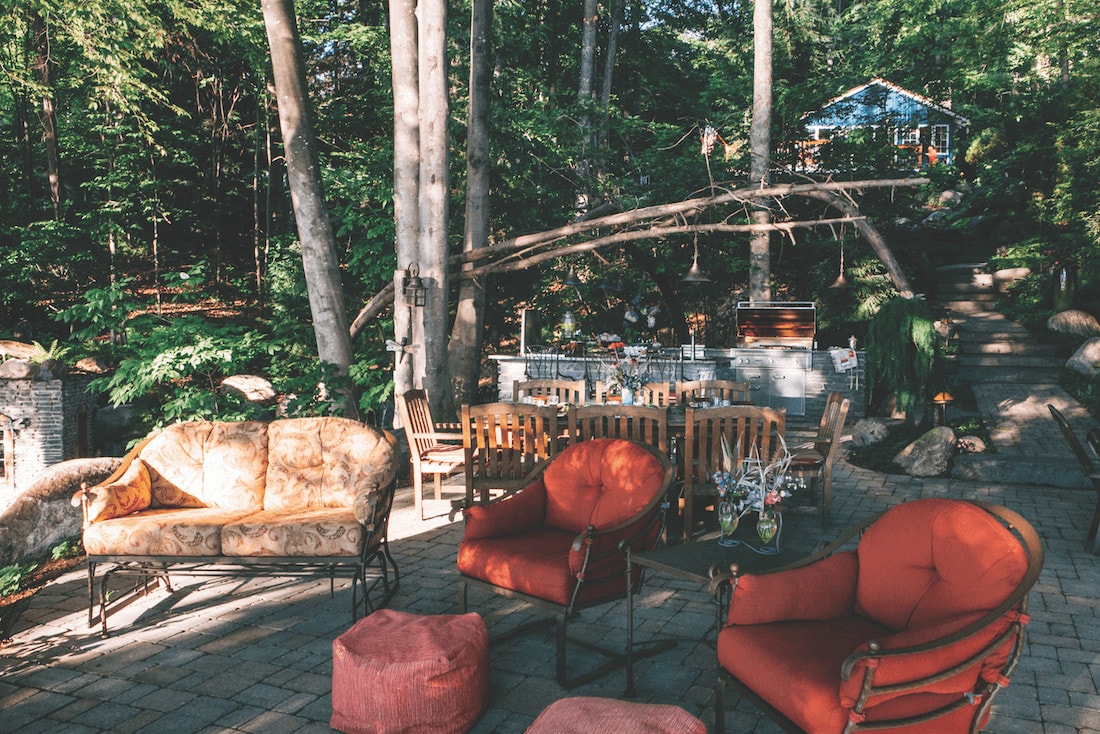 The cottage is the simple Up North real-deal. The couple could live with that. What the Robinsons, especially Charles, couldn’t abide was the landscaping. “It was just railroad ties down to the lake,” he says. In working out a new design, Charles took to heart the same advice he gives to his clients: “If you’re going to build an outdoor kitchen, patio or other living space, consider all aspects and do it right,” he says. “Don’t cut corners. Remember you are investing in your life, your children’s, as well as any visitors.” 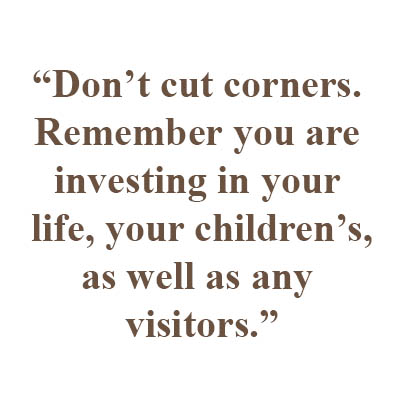 That philosophy translated into a landscape plan that included easy access to the lake (and their beloved ski boat) and plenty of space for outdoor entertaining. The wooded lot that drops off about 60 feet from the cottage to the water was a challenge—or would have been to anyone but a landscaper who lives and breathes the Walloon-area topography. While many people might have opted for cutting a wide swath of trees to capture the view and then planting a lawn, Charles chose to leave the woods in place—satisfied to let Walloon Lake’s ever-changing blue wink through the foliage. His landscape design would cascade down the slope like a waterfall. Along the way, there would be mystery, enchantment and whimsy.

Now long completed, the backbone of Charles’s design is a meandering swath of bluestone steps and brick walkways descending from the cottage. Nestled organically into the land with a mix of boulders, ferns, myrtle, rhododendron and astilbe, the shaded stairs encourage a leisurely pace. With each step down the bluff, Walloon’s surface sparkles a little more brightly through the beeches, maples, and cedars. 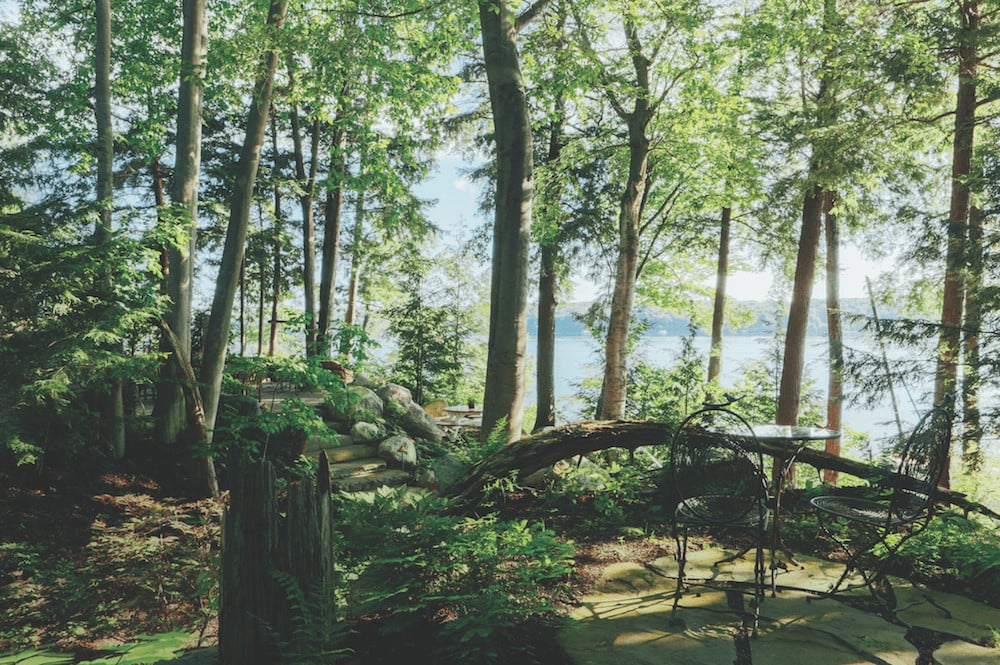 About halfway down, the path reaches the central outdoor living space—a patio laid with pavers that is large enough for an outdoor kitchen, eight-place teak dining table, fire pit and seating area. Off to the side and down the slope just a few feet is a stacked stone grotto—as functional (for storage) as it is romantic. The structure’s windows and doors are recycled from older homes and cottages, as well as a mix of materials including barn wood, oxidized copper, birch bark, slate and beadboard. A quaint bluestone patio atop the grotto roof offers another blue-water view.

The outdoor kitchen is an open rectangle created from three connected islands made from stacked New York Bluestone Select stone with granite countertops. The kitchen is outfitted with sealed, stainless steel cabinetry and appliances by Lynx—grill, refrigerator, icemaker, garbage unit, and even a beverage cooler built into the countertop. With Northern Michigan summer entertaining built into their very DNA, Cheryl and Charles knew exactly how to lay out the kitchen area. “It’s buffet style,” Charles explains. “The grill is first—we don’t even set out platters because people take their food right off the grill.” Logically, the beverage cooler is at the end of the counter. 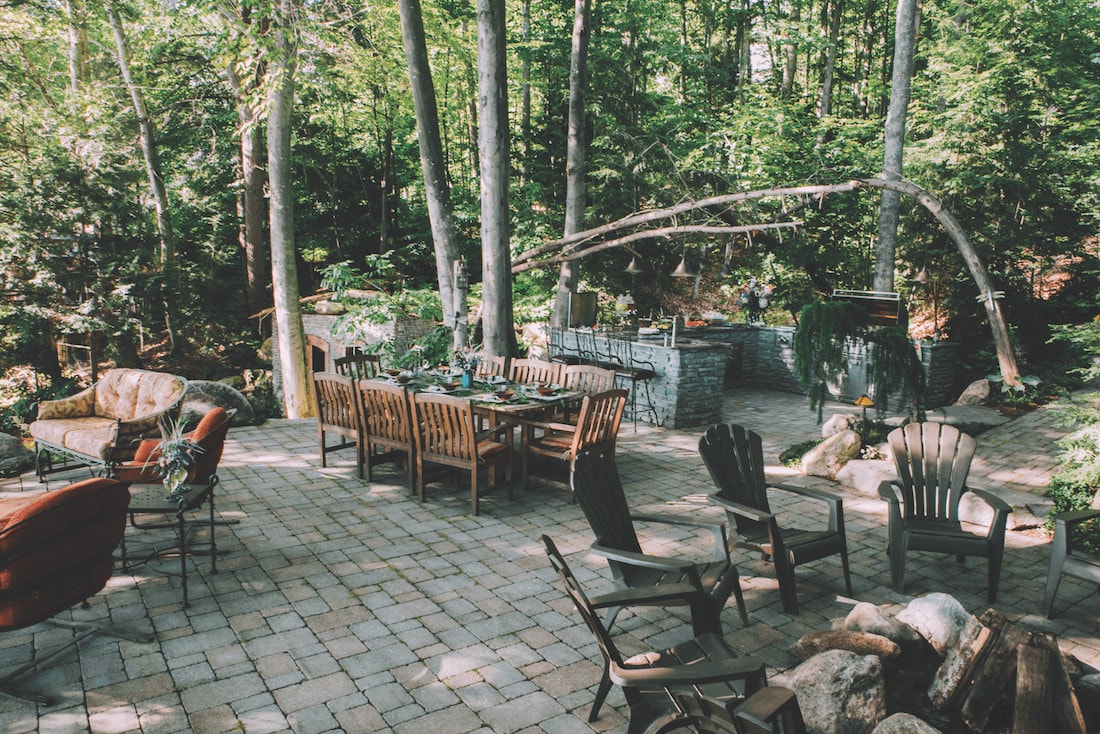 The lighting is another classic Robinson touch: The family trekked into a nearby swamp and gathered several bent trees and brought them to the site where Charles mounted them and attached rustic pendant lights that dangle in the lake breezes.

There are several more levels on the way down to the lake—one for a circular picnic table and another for a child’s swing shaped like an airplane. When visitors finally reach the dock for sailing or water-skiing, they’re already plotting out where they’ll relax after boating.

The layout of the whole lot harkens back to the classic style of summer lake living, when the cottage was tiny and everyone wanted to be outside. With the waves lapping and the canopy alive with birdsong, the Robinsons know this is the way it was meant to be on Walloon. 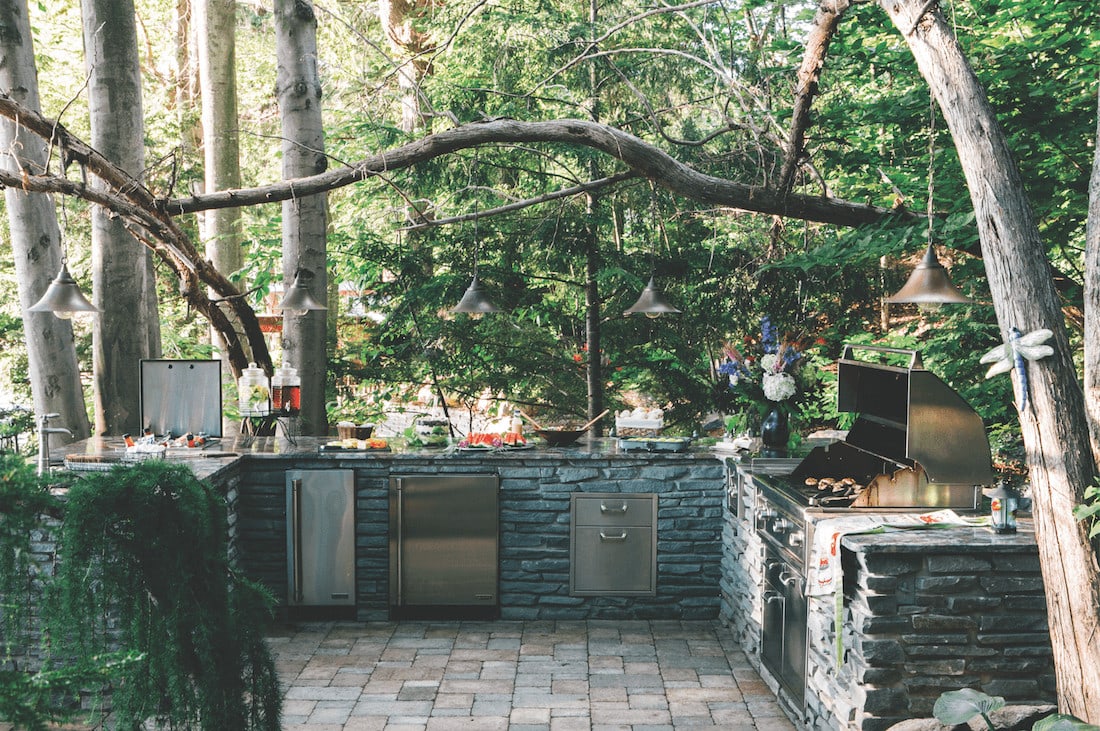 This Northern Michigan home feature was originally published in the April 2016 issue of Northern Home & Cottage.
Click here to subscribe.