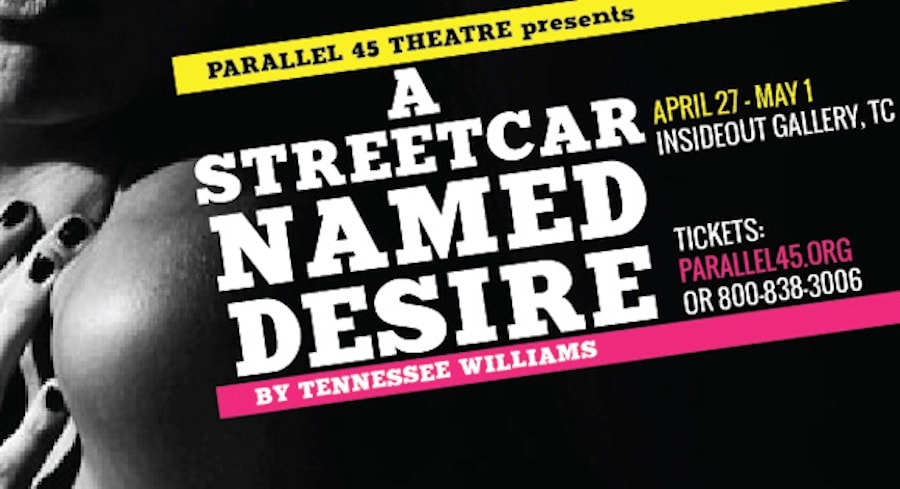 If you have a free evening (or weekend afternoon) available April 27 thru May 1, you would do well to get hold of tickets to Parallel 45 Theatre’s production of A Streetcar Named Desire.

I recently had the good fortune of sitting in on an early rehearsal—it was the first time the cast performed the play start to finish—and despite the stopping and starting, despite the occasional call for a forgotten line (“line…”), despite the re-do’s, despite no makeup, despite the cast in street clothes, not costumes, despite the 10-minute rest break, I was transfixed by this iconic American tragedy by Tennessee Williams, which received the Pulitzer Prize for Drama in 1948.

For those of you who are not familiar with Parallel 45 Theatre, the group formed about six years ago with the goal of bringing professional actors and stage hands to Traverse City to produce sharp and smart shows that felt like what you’d experience in, say, Chicago or New York.

The company has roots in Interlochen Center for the Arts, where founders Erin Anderson and Kit McKay first met as high schoolers. They also met dozens of other talented people there, and those connections endured, eventually forming the talent pool for Parallel 45 Theatre. Those people are now well into their professional stage careers and travel from such places as New York and London and California and Chicago to perform for the people of Traverse City.

For first time ticket-buyers, the Streetcar production will serve as a powerful introduction to what this group is capable of. For returning fans, the show will only reinforce what you already know of the company’s ability to deliver.

McKay, Parallel 45’s creative director, first experienced Streetcar at Interlochen when she was 15 years old. “It was the first play that showed me theater could have the power to move you emotionally,” she says. “That was a light that turned on for me early in my life, and I’ve held onto that forever since.”

Streetcar shares structural similarities with classic Greek tragedy—in the sense that tragedy seems inevitable from the very first moments of the play. But McKay explains there is an important difference. In Greek tragedy, the events are driven by a character flaw. But for Streetcar’s central character, Blanche, “it’s not really a flaw in her character,” she says. “Her collapse is because of her circumstance. I see her as a fighter and a noble warrior against her dysfunction and the circumstances that ultimately led to her demise.”

McKay feels a strong positive message does emerge from Williams’s compelling tragedy. “The real thrust is to keep fighting. Whatever it is you are fighting, whether it’s addiction, trauma, emotional dysfunction, keep that fight going. And for those of us not struggling, Streetcar helps us have empathy.”

The play is staged in-the-round and in the intimacy of an 80 seat theatre at InsideOut Gallery. Tickets are $20.