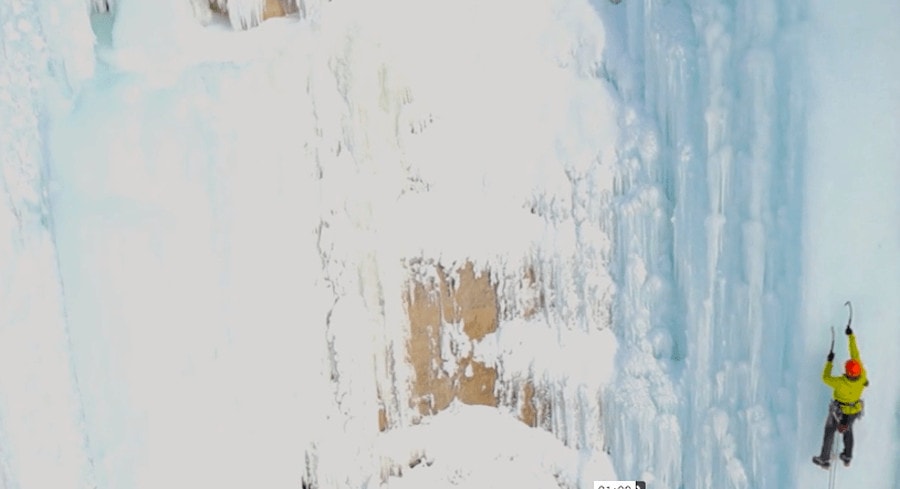 Aaron Peterson, long-time photographer and resident of the Upper Peninsula, first picked up a video camera just a few years back and was instantly smitten by the prospect of telling stories with moving images. His first film, Cold Rolled, was a dramatic, playful and up-close portrayal of the then new “fat-tire bike on snow phenomenon” that was igniting in the U.P. And the film quickly coursed through the veins of the nation’s fat-tire world.

Since then, Peterson has been pushing deeper into the U.P. wilderness and cold and intensity to produce a film about world class ice climbing at the Pictured Rocks National Lakeshore, near his home. The film features internationally renowned climbers and locals scaling the ice formations at Pictured Rocks, and the film achieves an epic quality that echoes the spirit of top films in the outdoor film genre.

Titled The Michigan Ice Film, the movie debuted in Munising at the Michigan Ice Festival in February 2016, and recently played to two sold-out seatings at the Freep Film Festival, in Detroit. We saw it and loved it and wanted to get more from Peterson, a regular contributor to Traverse Magazine and MyNorth.com, about what went into this remarkable Michigan film about Pictured Rocks ice climbing. (You can stream it at vimeo.com/ondemand/michiganice.)

Tell us about when the idea first sprouted.

“I sat down with Bill Thompson, owner of Downwind Sports and a friend of mine, and it was after Cold Rolled, and he said, ‘What are you gonna do next?’ And he gave me a guidebook to ice climbing at Pictured Rocks. I thought I knew about ice climbing there, but I realized then that I definitely didn’t. I was amazed by how much ice was out there and by how far back the climbing culture goes. I then got to know the Midwest rep for Black Diamond, Jon Jugenheimer. He took me out and introduced me to another climber, Mike Wilkinson, and he had climbing and videography skills. He was essential to the project because I had just started ice climbing, so I was not comfortable climbing and shooting. Mike did all of the climbing shooting. And another guy, Dan Englund, pitched in on the drone work.”

What was the original concept?

“It started out as a small film, a ‘did you know’ with some action, and we started filming back in 2013, thinking of a 10 or 20 minute film. Then the stories started coming out. Stories of professional climbers who had started their climbing careers here. Or maybe they grew up in Michigan and moved West to climb, but were returning to climb here for the first time. We were tracing roots a bit. Like Sam Elias, a professional climber sponsored by North Face, Black Diamond and Scarpa among others. A visible professional who wanted to be a part of it.”

“Yeah, we shot again in the winter of ’14 and we got a bunch of stuff in the can, but it was a bunch of B roll. There was no story yet. That included a lot of stuff we shot before and after Ice Fest, professional climbers who had a connection to the area. Then in late winter ’15, Mike came back to shoot Sam climbing. And that’s when the weather got really intense. Blizzards, whiteouts, brutally cold temperatures. It really limited our ability to shoot, but it really gave the film its flavor. That’s when we got that footage of Sam’s pick getting stuck in the ice. As far as we know that was an unclimbed piece of ice. But we really don’t know what’s been climbed or not there because there’s no record of it. Out West, it’s all about first ascents and the person who climbs it first gets to name it. But around here, people don’t really record their first ascents. They just check their egos and have fun. It’s a Midwest thing.”

What about that guy ice fishing … who is he?

“That’s our pastor, Pastor Kelto, in Chatham. And I wanted him in there to give the film a little more weight than just climbing. I was hoping to get some spirituality in it. Make it a little heavier, have an appreciation for creation. His sermons often start with landscape, the land, thoughts, reflection on that, so I thought of him. And sometimes he talks about ice fishing. And I thought, if I needed some soul in there, it would be pretty hard to go wrong with an ice fishing Lutheran pastor. He was pretty disappointed that we didn’t catch a fish that day.”

The appreciation of story is such a strong part of the film’s spirit.

“Yes, well, the story just kept evolving. They are good stories that have not been told, period, let alone brought together in one place for the climbing community and done so in an entertaining way that would go out to the world. It’s really cool to see fellow Michiganders and Midwesterners perking up and taking notice. I love seeing people get out in winter.”

So the Michigan Ice Film has been out in the world a little bit now. What are you hearing?

“I was thinking of it as a climbing film and that it would appeal to the larger outdoor community, but it’s turning out to have this huge cross-over appeal to people in the Midwest, outdoor people and beyond that demographic. Seems to be spreading peer to peer, just people telling their friends about it on Facebook or whatever. We’ve had people from 18 countries stream it, too.”

Will other Michiganders have the chance to see it on the big screen?

“There are some independent theaters who want to run it, so I’ve been talking with them. It’s best when I can be present when the film shows, talk to the audience, hear their reactions, just be connected … so we are trying to work out some scheduling now and strike while the iron is hot. There’s more demand than I thought there’d be.”

The film name. Kind of generic.

“Right, the title, well, it is what it is. That’s a Midwestern thing too. It’s not some bullshit sexy name. We didn’t know what to name it, so we thought, let’s just name it Michigan Ice Film. And, yeah, it’s a little quirky. It’s boring. It’s kind of lame. But I don’t know what else it would have been called.”