After their Walloon Lake cottage burned to the ground, the Biltzes rebuilt in a beautiful way.

This home is featured in the April 2016 issue of Northern Home & Cottage, a bi-monthly home publication included in all subscriptions to Traverse, Northern Michigan’s Magazine. Subscribe! 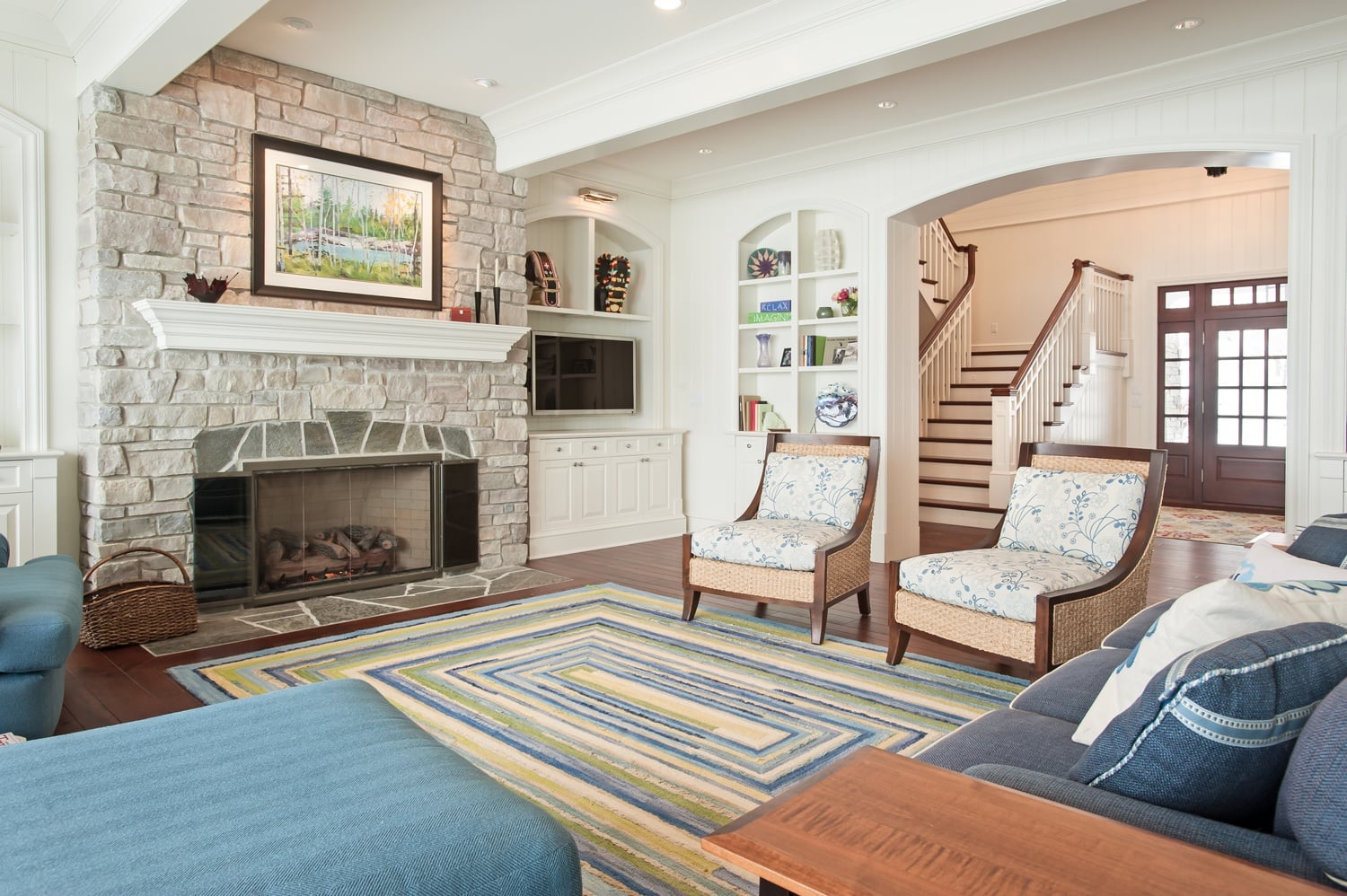 George and Bev Biltz’s airy, contemporary cottage on Walloon Lake is a happy place often filled with family and friends and always filled with color. The deep blues and greens of Walloon Lake flood the view out of floor-to-ceiling glass doors and windows, and the living room is decorated in beachy shades of blue, green and yellow. Outside, vibrant flowerbeds make their declarations of welcome.

It is hard to believe that not long ago this was a charred site, containing only the feet-deep ash remnants and stone chimney of the Biltzes’ former cottage—a 1960s ranch that the family had built memories around for over a decade. Every chance they had, the couple and their four daughters had traveled to the cottage from their home in Midland. And suddenly a fire and a devastation that included heirlooms, mementos from their travels, George’s father’s vintage fishing gear, and a most-cherished guestbook that documented their many houseguests (some from as far away as Europe and China), as well as many fun times they’d enjoyed at the lake were lost. Gone, too, were more than 80 lovely trees that had surrounded the home. 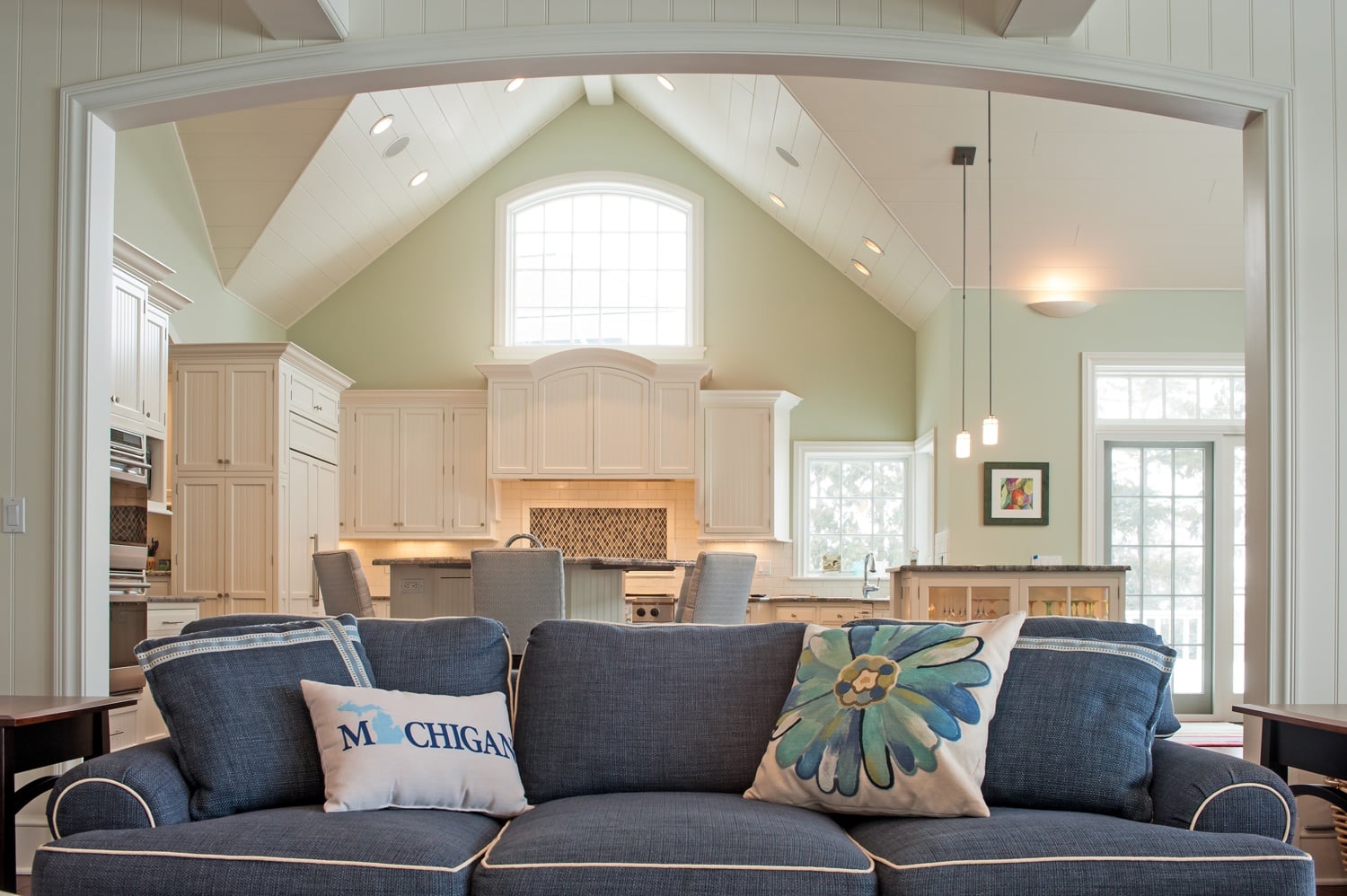 After the fire, the couple worked hard to find the silver lining. “We had always wanted to redo the house, so we figured this was our chance,” Bev says. Their goal became building a new home in keeping with the classic cottage architecture that rings Walloon Lake, while incorporating contemporary elements and being roomy enough for family and guests. 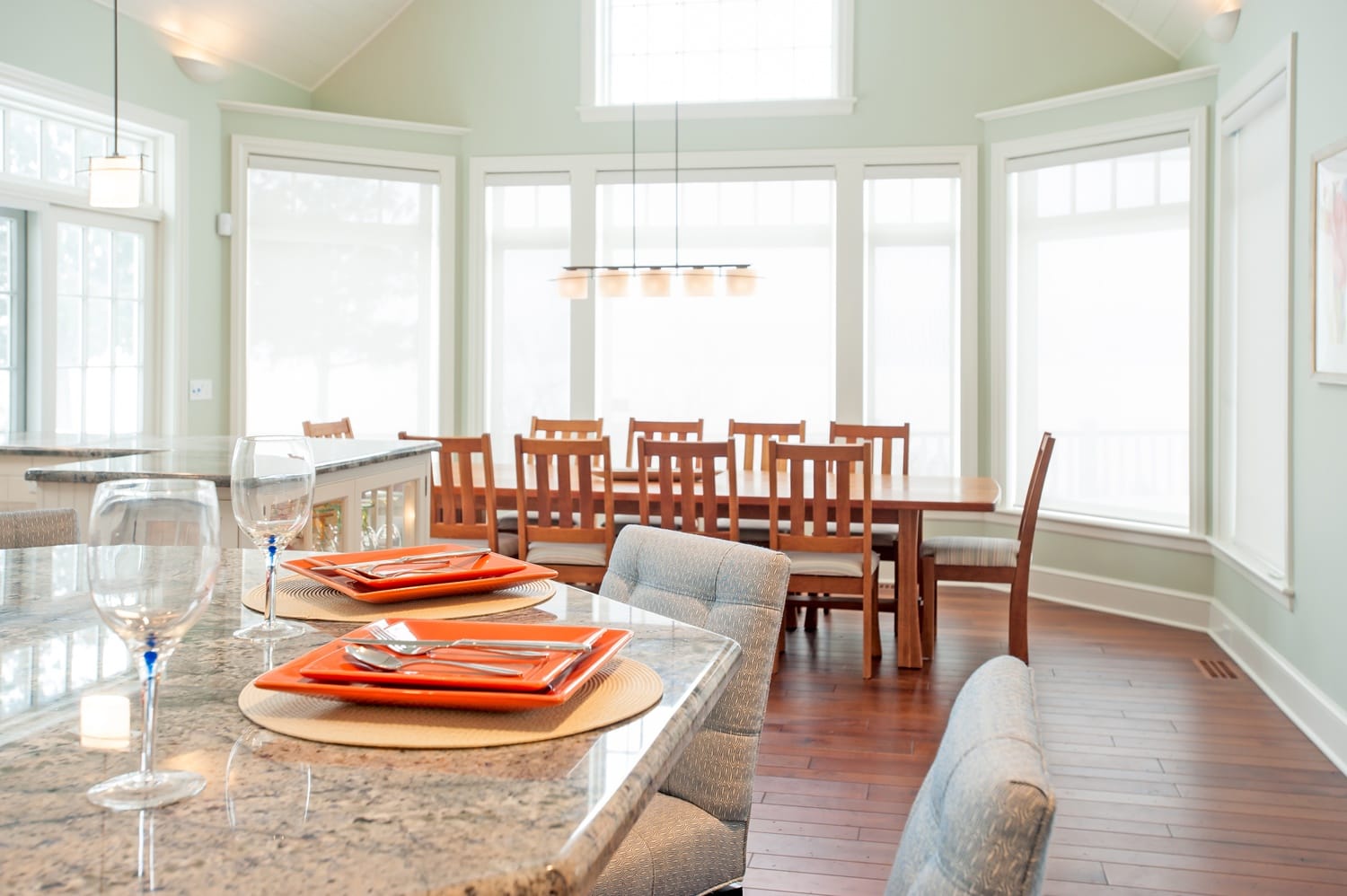 In the kitchen, Firebaugh took White’s architectural cues and added touches like white beadboard, mullioned glass cabinetry and an arched hood that echoes the arched doorways and the arch in a clerestory window above the hood. The granite countertops, a pattern called Blue Lagoon, pick up the colors of Walloon Lake.

Phillips took it from there, working closely with Bev to come up with a palette that celebrates the colors of water and flowers, played out in wall color, bathroom tiles, area rugs and more: soft green walls for the kitchen, aqua in the laundry room, lilac, teal and powder blue for several of the bedrooms. 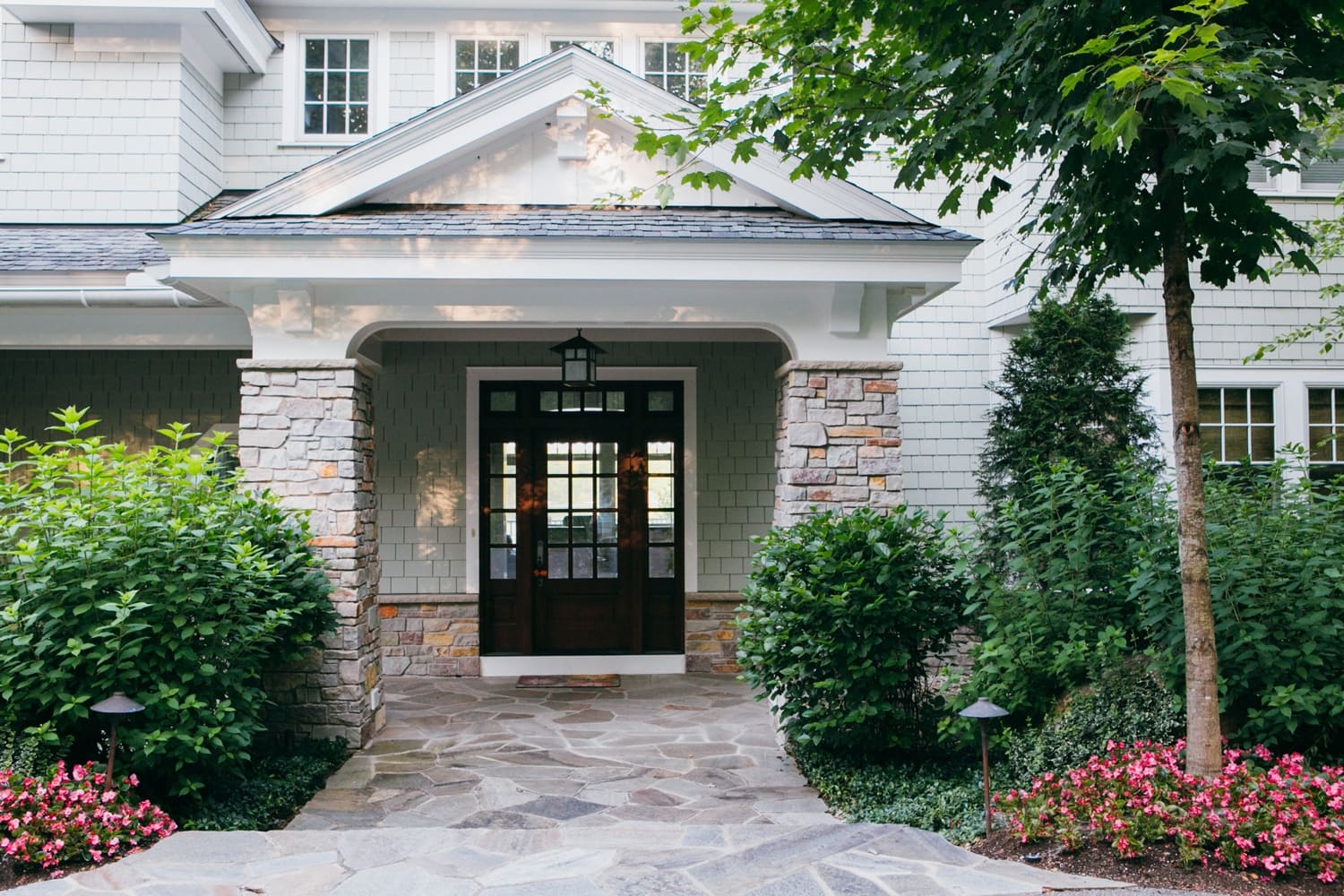 Given the burned-over site, landscaping was the next priority. “We lost over 80 trees in the fire so, like the house, it was pretty much a clean slate,” Bev says. “We basically just turned it over to Richard.”

Hoffman’s first task was stabilizing the bank that leads to the lake. A big part of that was using huge landscape rocks to anchor what would simultaneously create visual interest and function as tables and as benches. “We told him we like unusual stones … some are from Michigan, including one from the Upper Peninsula that has copper veining,” Bev says. The couple jokes that one especially large, flat boulder looks like a “sacrificial altar”—though in reality, its proximity to the fire pit makes it perfect for staging s’mores. 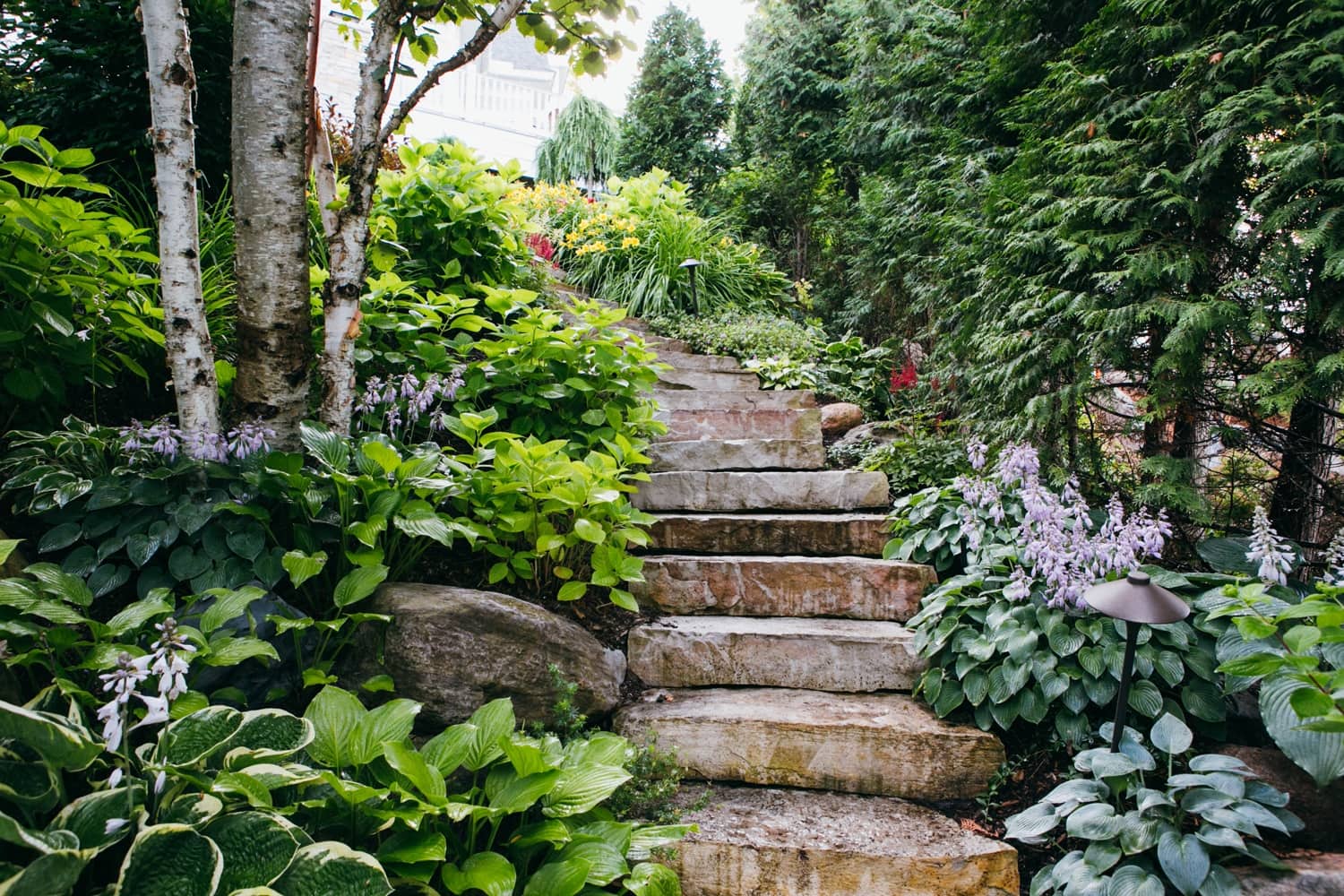 Starting from scratch on the landscape had its benefits, Hoffman says. “A completely open lot gave us an opportunity to help them build the outdoor living space to suit their desires and needs,” he says. Part of that included re-creating as much of the feel of their old cottage as they could. “We built seating where there had been seating before and the outdoor fireplace where it had originally been to help bring back some of the memories.”

There are new touches, as well, including a waterfall feature that begins as a stream on the side of the house, and then cascades past the hot tub on down the sloped bank and into the lake. 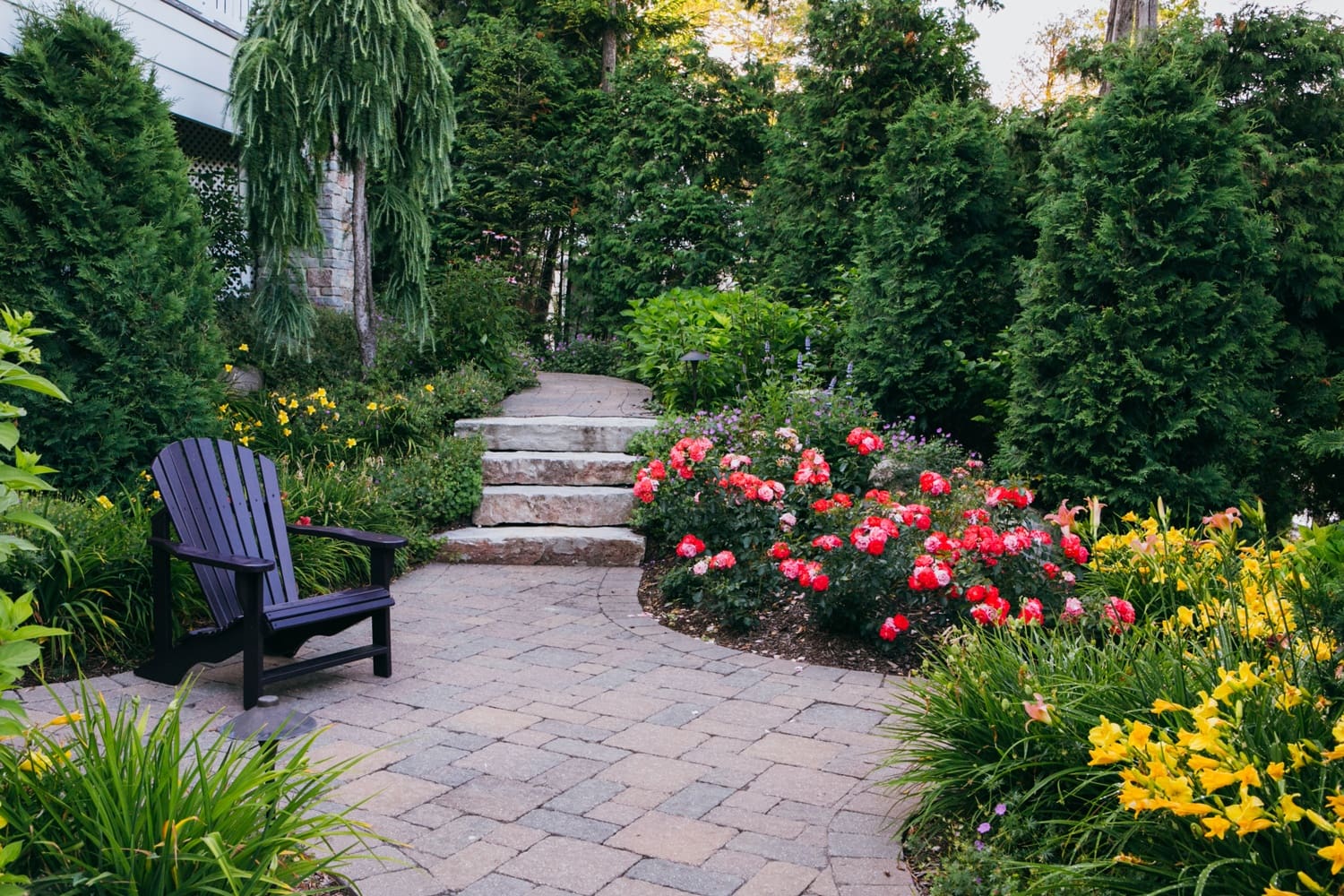 Hoffman went on to fill in between the hardscapes with lush plantings, including heirloom hostas and ferns that were transplanted from Bev’s mother’s home in upstate New York, as well as the fast-growing, fascinating dawn redwood (Metasequoia glyptostroboides), a tree that has fossil ancestors in the Northern United States that date to the dinosaur era. The tree was thought to be extinct until one was found growing in China in 1944.

In a fitting tribute to the rebirth of this home and grounds, Hoffman considers the plantings on the Biltzes’ property to be a legacy; living artifacts that will be around for great-grandchildren to enjoy. 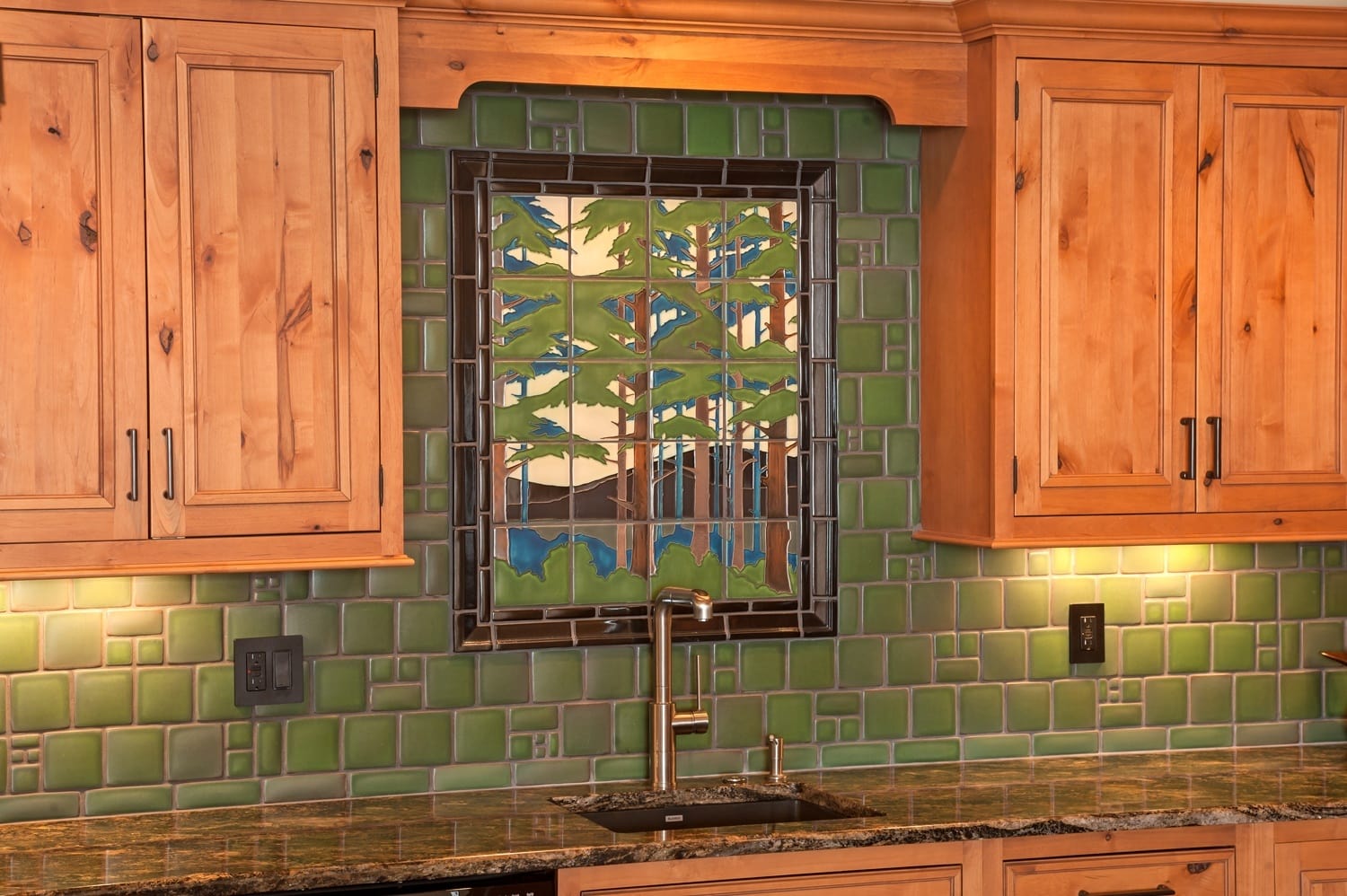 In Memory of Trees

The lower, walkout level of the Biltz home pays homage to the many trees lost in the fire that also destroyed the original cottage. The couple incorporated the lumber salvaged from the maple and beech trees lost in the fire into the room’s wainscoting, a game table, a coffee table and a bathroom vanity and mirror. The backsplash in the bar area is a Motawi-tile mural of trees, water and hills—a fitting tribute to the lost trees as well as to the family’s love of the beauty of Walloon Lake. The tiles, called collectively Pine Landscape, are a signature Motawi series that was inspired by a famous early 20th-century Craftsman-era tile design by Addison LeBoutillier, called Pines, for the company Grueby Faience. The Motawi tiles are formed by clay pressed into a mold and then each is painstakingly hand-glazed. 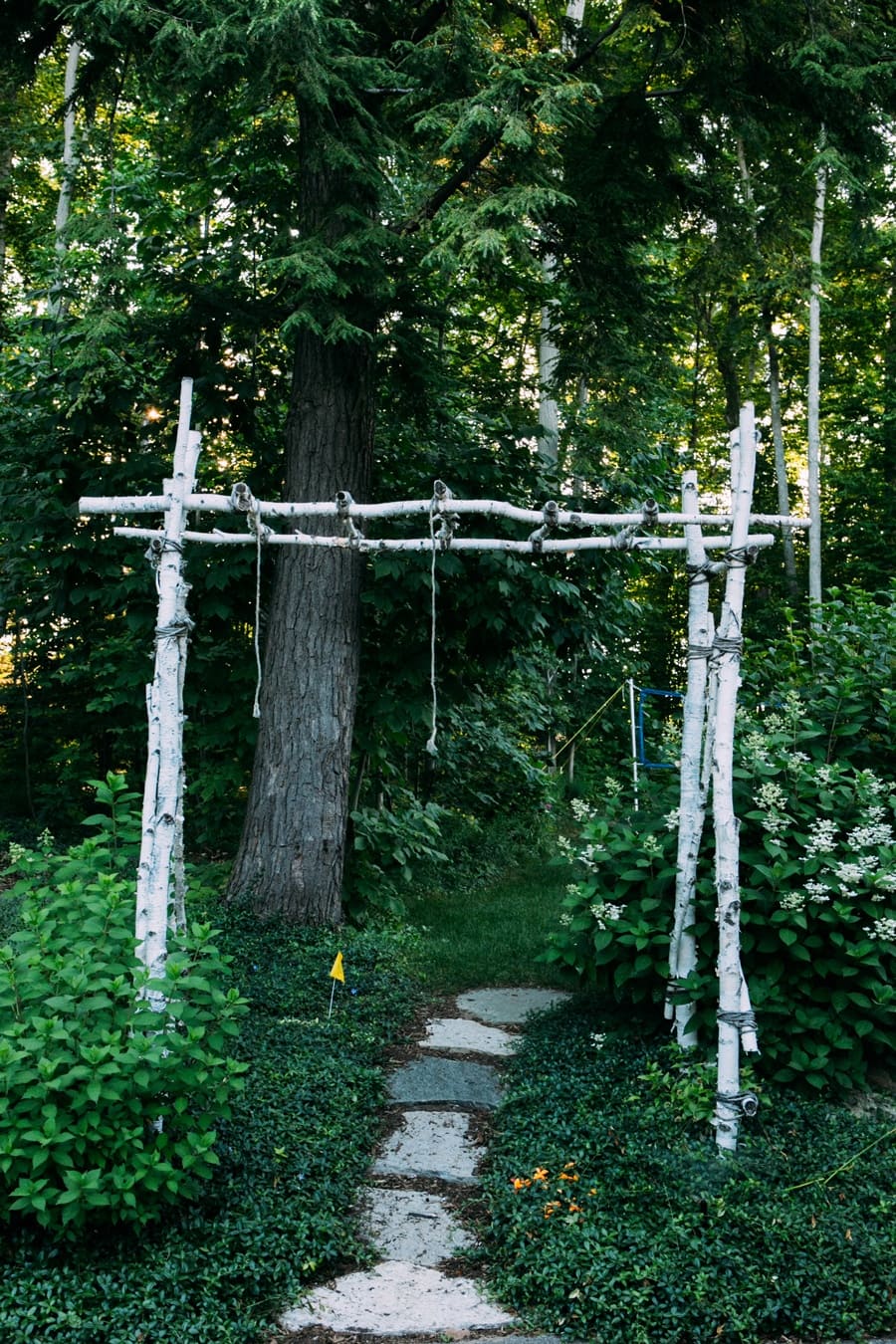 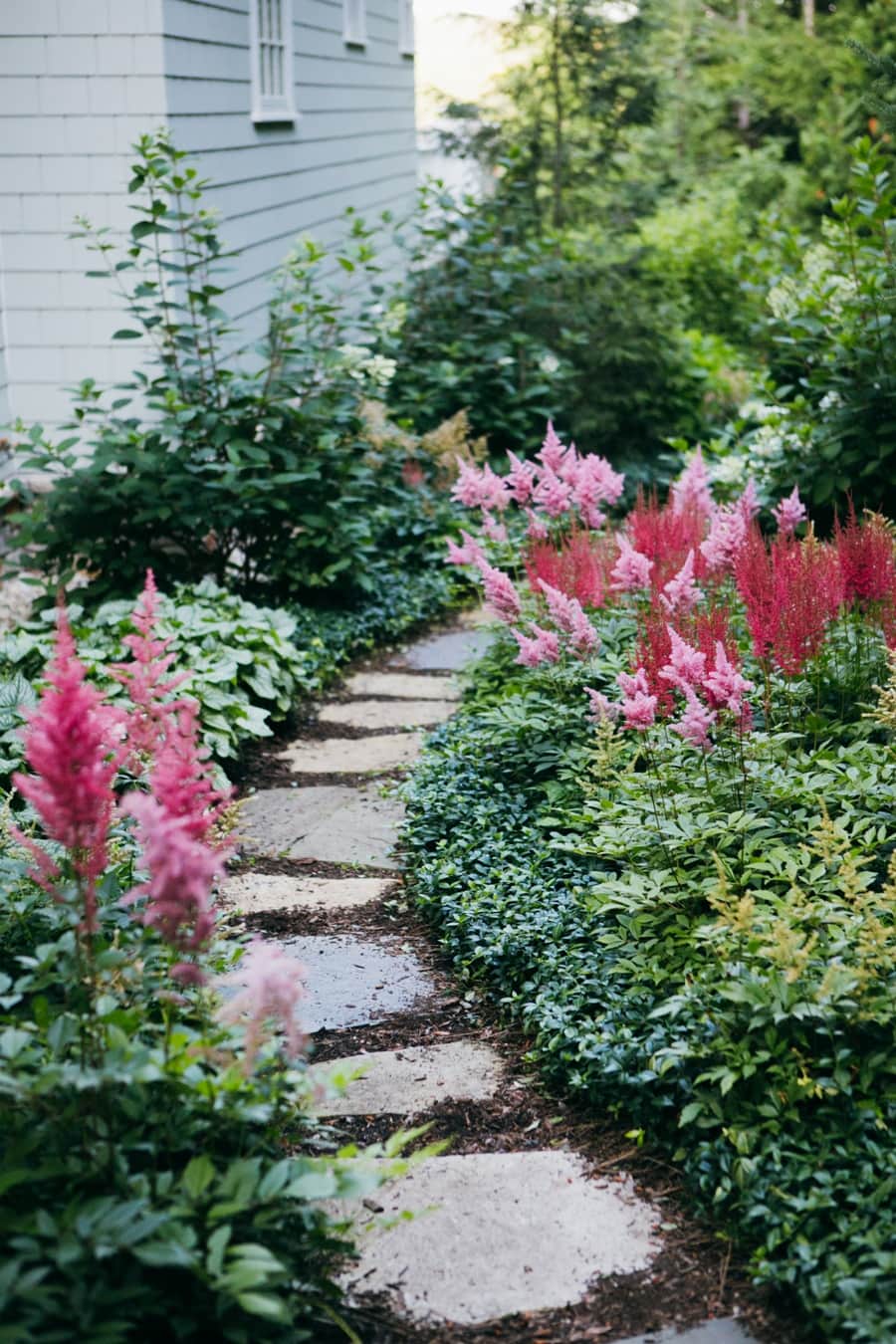 Find everything from contractors to landscapers in MyNorth’s Northern Michigan Home Services Directory.