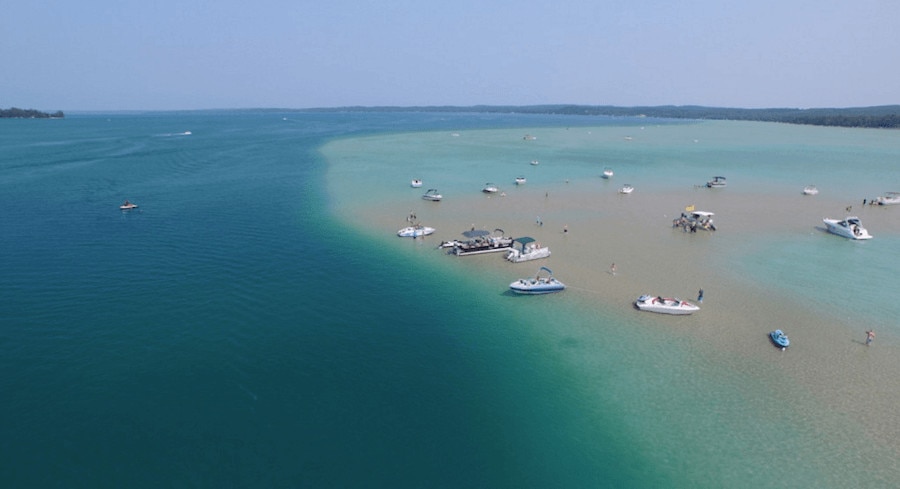 The Torch Lake Protection Alliance (TLPA) filed a lawsuit against promoters of the Torch Lake Sandbar Bash on April 5 in the Kalkaska County District Court.

The TLPA is seeking a permanent injunction against future Sandbar Bashes stating they’re a public and private nuisance and are held without legally required permits. The complaint alleges that defendants Beatbox Beverages LLC, Lansing Party.com LLC and Brooks Ehlert (known as DJ Fade) created a nuisance by sponsoring, promoting and holding the Sandbar Bash on July 4, 2015, which attracted about 10,000 people to Torch Lake. (View photos taken at the 2015 Sandbar Bash here.)

To find out more about the ongoing lawsuit, we talked with TLPA President Greg Payne.

How long have these “Sandbar Bashes” been going on for?

“The sandbar on the south end of Torch Lake has been a gathering point for boaters for many years. Every summer weekend, the south end of the lake is very busy with many boaters enjoying the clear water and expansive, shallow, sandy bottom of the sandbar. The number of boats has grown with the area’s popularity, and the general atmosphere has continued to have a laid-back, casual feel, even with the increased numbers. These impromptu gatherings are not the focus of our attention.

“However, over approximately the last 10 years, the 4th of July has become a focal point for a different type and size of crowd. The demographic shifts from a wide age range, multi-generational population to predominately a much narrower 18 to 25/30-year-old group. A ‘no rules’ party attitude has become the predominant atmosphere for the holiday on the sandbar, and its popularity has increased through social media exposure. Promotion and sponsorship of an unsanctioned party ‘event’ on the sandbar by professionals (a party organizer, disc jockey and liquor company) through social media has significantly contributed to these changes.”

What was it like at last year’s Sandbar Bash?

“Over the last several years, the ‘walk-on’ traffic to the sandbar, primarily through a small public township access, has significantly increased, shifting the majority of the population from boaters to non-boaters. This has created significant traffic, parking, trash and behavioral issues such as trespassing and drunk and disorderly conduct all along the roadways on the south end of the lake. The cost and coordination for providing the required public safety services as well as trash and sanitation collection and removal have been absorbed by the community. The professional promoters feel no legal obligation or liability in this regard. Ownership of these responsibilities is the foundation of the lawsuit.

“It is important to note that this is primarily a single family residential area. There are no state or county parks in the area. There is no public beach or public parking lot for people trying to access the lake. Several small businesses operate at or near the mouth of the Torch River with very limited short term parking available. One small DNR parking lot is available on a first come basis for only vehicles with trailers using the local boat ramp. The area simply cannot adequately accommodate the significant influx of people and vehicles for such a gathering. The activities on the sandbar (in the lake) during the holiday resemble spring break on Daytona Beach. Heavy alcohol consumption is common, including by minors. Drug use is fairly prevalent. Women are encouraged to ‘pole dance’ on specially equipped pontoon boats and ‘flashing’ is fairly common. The water is full of trash with high levels of ammonia and E. coli measured, the result of many people using the lake as a toilet. Extreme noise levels generated from boats outfitted with professional audio systems can be heard at a very annoying volume onshore, depending on the wind direction at the time. Many regular visitors to the area now avoid the sandbar for obvious reasons.”

Are there any public bathrooms nearby?

“No public bathrooms exist in the area. Several portable toilets and trash receptacles have been brought in to provide some onshore sanitary facilities, but the lack of public space available and cost for the services has limited their expansion for the appropriate quantity. The cost for these services has been covered by Clearwater Township and the Torch Lake Protection Alliance in an attempt to prevent a sanitation disaster.”

What damage does the bash cause to the lake?

“The actual damage to the lake is undetermined. However, the large amount of trash left in the lake can never be completely removed and can affect fish and waterfowl. High levels of ammonia and E. coli can be measured and are generally bad for the environment. In addition, these effects are not limited to Torch Lake since the Torch River, located just to the southwest of the sandbar, flows first into Lake Skegemog and then on into Elk Lake.”

What does Torch Lake mean to the surrounding community?

“Many people have owned property here for generations, utilizing their homes on either a full time or part time basis. Generally speaking, residents treat the lake with a great deal of respect and feel it is being violated every 4th of July. The natural beauty of the lake and the recreational opportunities it provides make it a great place to live. This also makes it a great place to visit. Residents simply want visitors to show the same level of respect.”

What will be the next step toward banning the bash?

“The intention of the legal action initiated by TLPA is to eliminate the promotion and/or sponsorship of an event without providing for its resultant liabilities, caused primarily by increased crowds. Liabilities include but are not limited to costs for added public safety personnel, proper trash retention and removal, sanitation requirements on and off the lake, traffic control and parking needs and noise controls. Its intention is not to limit access to the lake or ban the use of the sandbar as a gathering point for lake users.

“The legal action was just filed with the court last week. The requirements to fulfill this step will play out over the next 6 to 8 weeks. Next steps will depend on the direction the defendants decide to take, which should be established before the 4th of July.”