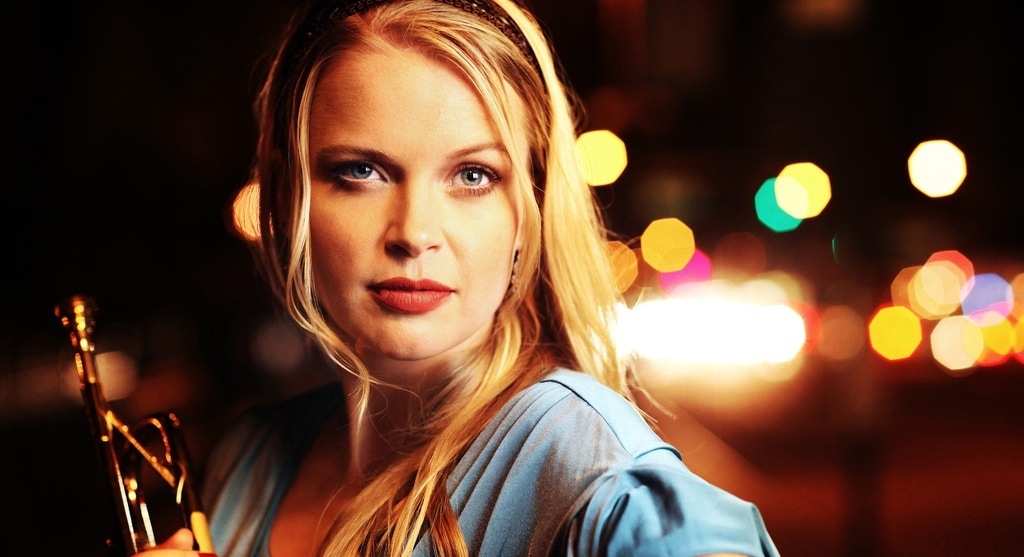 Upcoming Scottville and Traverse City events feature a trumpet-playing vocalist, Bria Skonberg, who harkens back to early jazz days. Bria Skonberg is a Canadian native who idolizes the likes of Louis Armstrong and Bix Beiderbecke.

On the surface, the thought of someone from the far western reaches of Canada becoming a jazz musician might seem odd. Make that jazz the traditional style, circa 1930-40, and it’s downright outré. Then you hear Bria Skonberg. The 30-year-old hails from Chilliwack, British Columbia, and her trumpet playing and vocalizing showcase both her chops and her predilection for the music of Louis Armstrong and the like.

“There was a revival (of traditional jazz) all along the West Coast in the 40s (through) the 60s,” explained Skonberg. Nearby Vancouver had an active Dixieland jazz community, and Skonberg fell in love with the music. Her hometown of Chilliwack had an annual jazz festival, and by the time she got to junior high she was hooked.

She cites the musical communication between band members as one of the reasons she favors the style. Another reason is that she believes the music is the bedrock of the formation of subsequent variants such as swing, bebop, cool jazz, and the like. “I feel like I started reading the book at the beginning,” said Skonberg.

That said, she said she takes in all different genres. Her personal playlist includes Jellyroll Morton, Hank Williams and Beyonce. “I listened to classic rock, hip hop, pop. I listen to music like you should approach food: try everything.”

Among her favorites are Armstrong, Stevie Wonder, and vocalist Anita O’Day. “It all started with Louis,” she said of her attraction to Satchmo. “(Wonder’s) ‘Sir Duke’ is a nod to jazz’s past. That horn line is just so cool. Being a horn player affects my approach to singing. Anita O’Day had a way of manipulating the melodies.” Skonberg said she splits her time between singing and playing pretty evenly. “There are hardly any songs where I don’t do both.”

The Canadian is now comfortable in her home of New York City. For one of her first gigs there, she invited comics to perform alongside the music. “That’s the beauty of New York, to try something you’ve never done before. The music from my last two albums is about that.”

How She Got Her Start

Skonberg started on piano, taking lessons in elementary school. She switched to trumpet in seventh grade, going on to graduate from the jazz program at Capilano University in North Vancouver. She landed a gig with Dal Richards, known as the Canadian King of Swing, and eventually made her way to New York, where she began impressing musicians such as John and Bucky Pizzarelli, Wycliffe Gordon, and Wynton Marsalis.

“Bria Skonberg looks like a Scandinavian angel (or Thor’s girlfriend), plays trumpet like a red hot devil, and sings like a dream. Her new album, So Is the Day reveals that she’s also a very capable bandleader and composer.” – Will Friedwald, The Wall Street Journal

“It’s clear she’s up to more than nostalgia. On trumpet, she’s been nurtured in the pre-bop traditions but stretches beyond to more modern approaches. Her singing chops may remind of Norah Jones.” – Greg Thomas, NY Daily News

Tickets for West Shore start at $8. Go to MyNorthTickets.com.

For City Opera House, tickets start at $23. Go to CityOperaHouse.org.