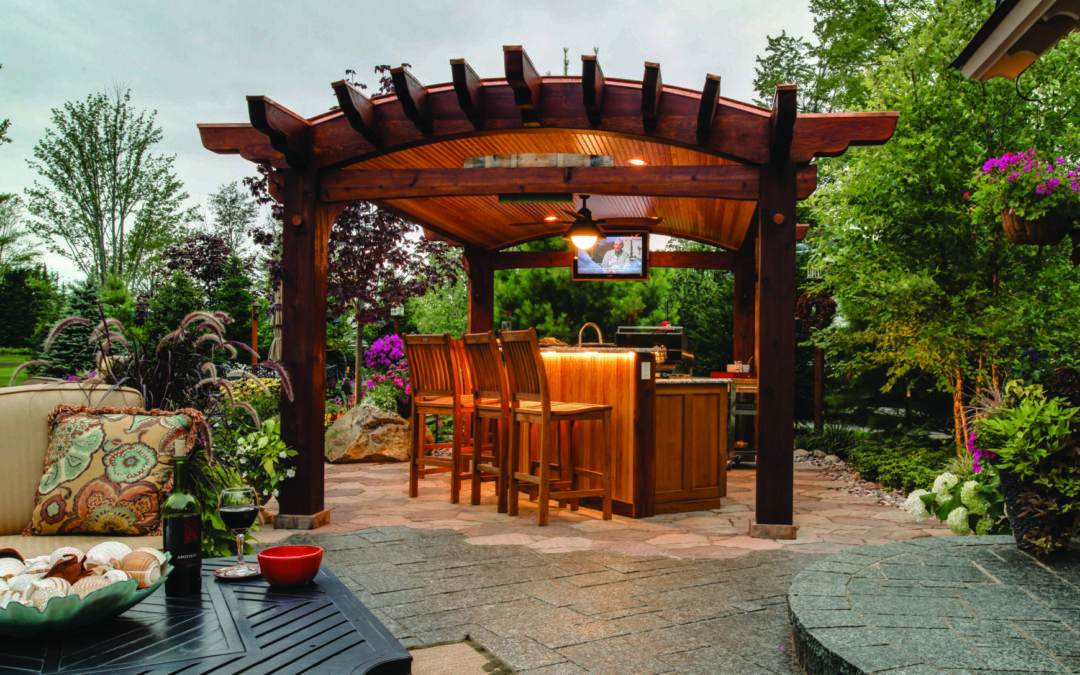 An outdoor fireplace, a secret garden, a lux outdoor motorcoach kitchen — John and Kathy Smith have figured out how to take a motorcoach lot in Petoskey to a whole new level.

By indulging her passion for colorful, creative gardens, Kathy Smith has turned the motor coach lot she owns with her husband, John, into an enchanted spaces that lives much larger than it is. Learn more about their outdoor motorcoach kitchen with this Northern Michigan home feature originally published in the April 2016 issue of Northern Home & Cottage.

As luxurious and well equipped as John and Kathy Smith’s Newell motorcoach is, it’s sized for entertaining to only a handful of guests at a time. But that doesn’t stop the couple from throwing elegant dinner parties for a dozen or more people after they’ve parked their RV on the brick pad at the lot they own in Petoskey’s Hearthside Grove Motorcoach Resort. How do they do it? In a spectacular high-end outdoor kitchen designed by Dawn Whyte, owner of Designs by Dawn in Petoskey. 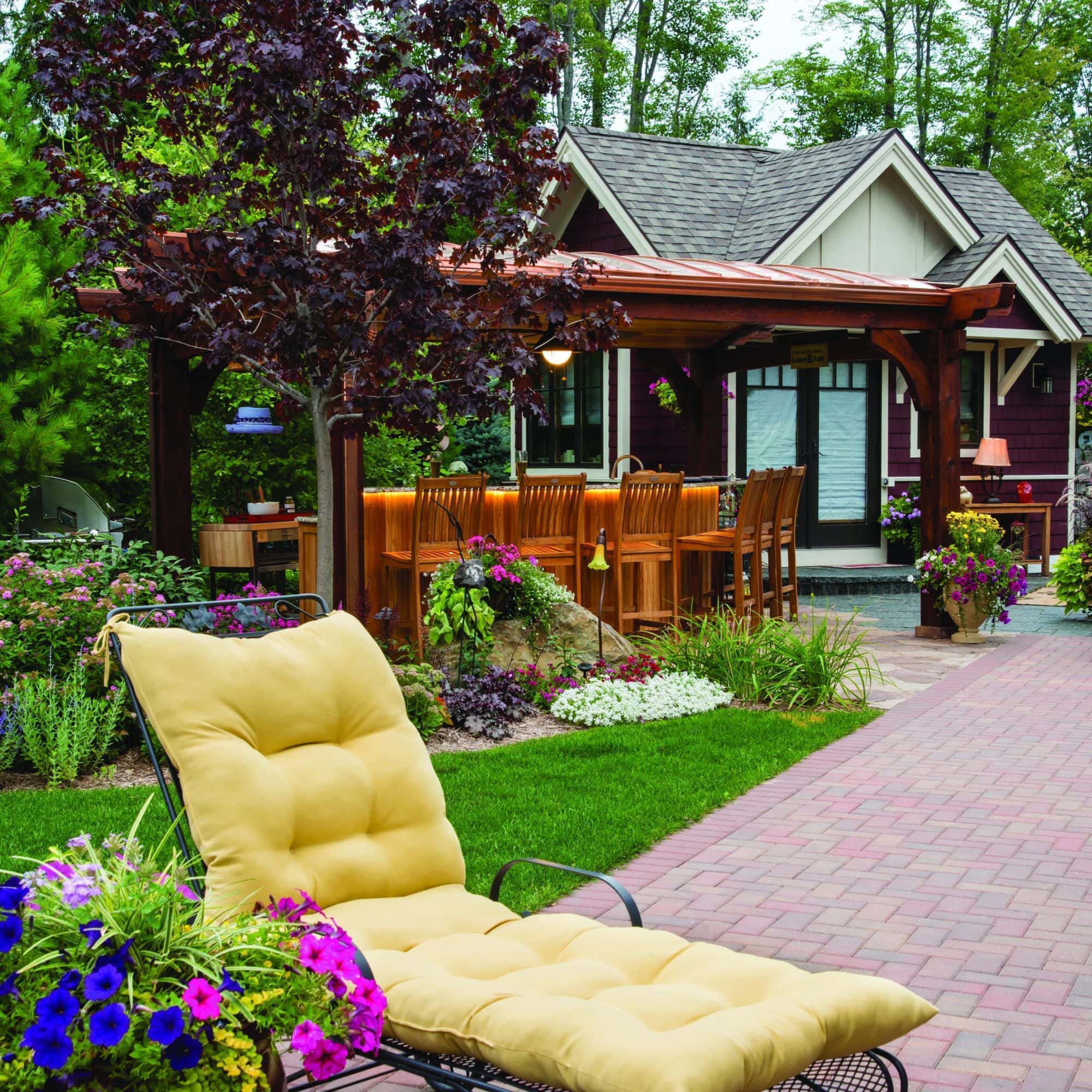 The Smiths, who hail from Minnesota, learned about earthside Grove through the motorcoach community. “Everybody said it was the nicest motorcoach resort in the country,” Kathy says. In 2011 the couple pointed their motorcoach to Northern Michigan to find out what the kudos were all about. They discovered a perfectly appointed resort outfitted with every amenity they could imagine—plenty of privacy thanks to beautiful landscaping, a pool, theater, fitness center and more. Add to that desirable package the proximity of Lake Michigan beaches and the sweet waterside towns of Petoskey and Harbor Springs with their shopping and dining, and the Smiths were sold.

The approximately 6,500-square-foot lot they purchased included a tiny, unfinished guesthouse and a stone retaining wall. That wall, installed by the Charlevoix-based Drost landscaping, was artfully designed to incorporate an outdoor gas fireplace and a water feature that drips water down the wall to a catch basin. 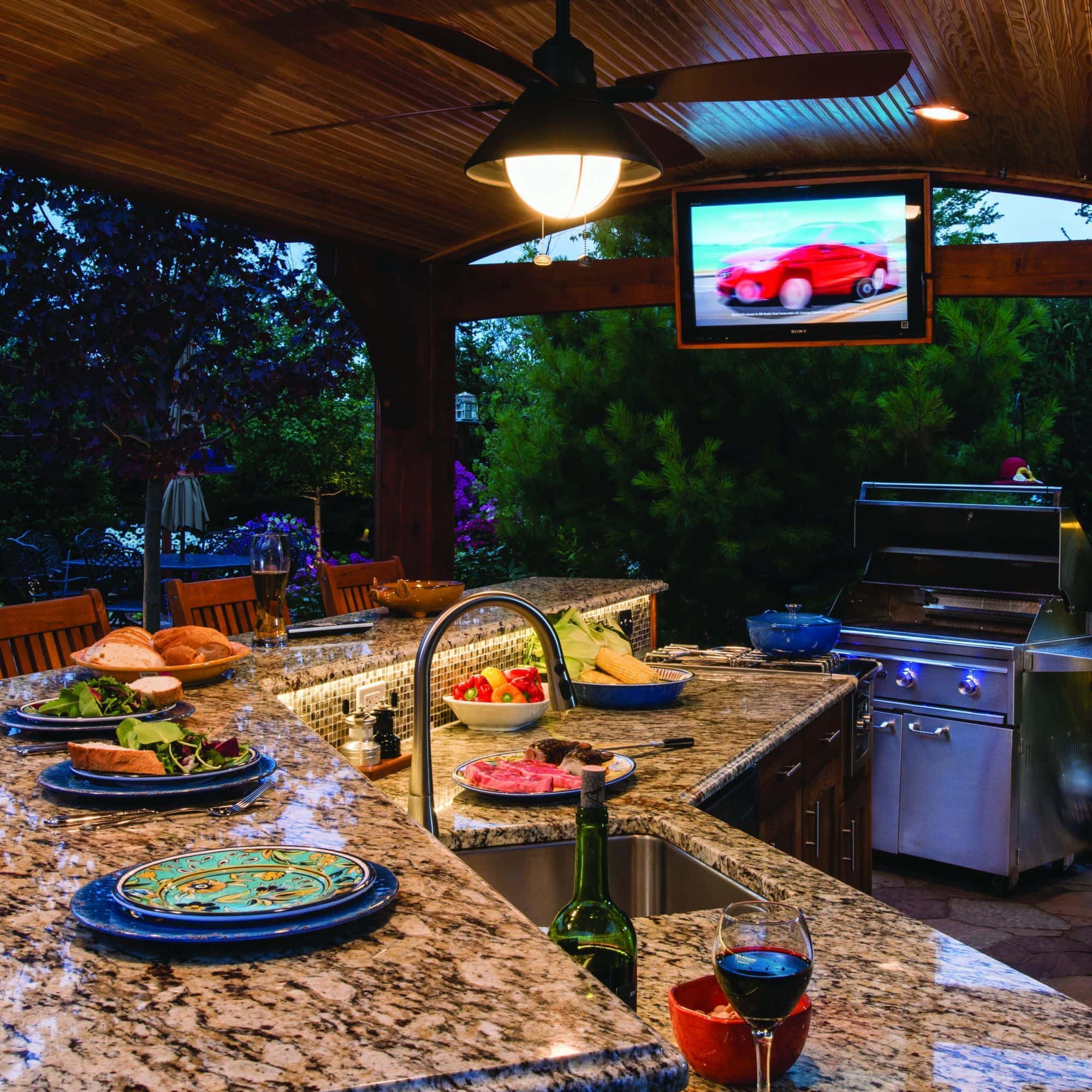 The Smiths and their guests either dine at the kitchen island or at a lovely outdoor dining set (located several feet outside the covered kitchen) that can be sheltered with a sturdy umbrella.

With the structure so small, the Smiths looked to the great outdoors for their kitchen. Beyond knowing that they wanted the kitchen weatherproof, and that John wanted to incorporate teak into the design, the couple turned the project over to Petoskey kitchen designer Dawn Whyte. “She’s very creative,” Kathy says.

Whyte’s handsome design for the weatherproof cedar pergola, with its copper roof and Douglas fir beadboard ceiling, plays off Northern Michigan’s beloved Craftsman-cottage style. Under that roof, style and function fuse deliciously. A two-tiered, angled island seats six on the upper tier while providing plenty of room for prepping on the lower tier. The Venetian gold granite countertop makes for a durable, elegant prep and clean-up surface. Whyte positioned the grill off to the side so that John, the grill master, isn’t underfoot when chef Kathy—who loves trying new recipes—is preparing the rest of the dinner. The grill is by Lynx, as are the two-burner stove and under-counter refrigerator. The cabinets, by Atlantis, are fabricated with Perma Tek, a weather-resistant material, and wrapped in teak. A flat-screen television, sound system and LED strip lighting around the island round out this captivating room without walls.

Meanwhile, the Smiths worked with Petoskey landscaper David Hoffman of Jim Hoffman’s Sons landscaping to add a patio surrounded by plantings that add color, enchantment and privacy to the lot. Evergreens shroud the front entrance from direct view, while a combination of evergreens, deciduous trees, hydrangea, spirea and potentilla screen the sides. In between, Kathy indulges her passion and talent for gardening with flowerbeds that pop with hostas, daylilies, Shasta daisies, black-eyed Susans and flower pots filled with begonias and impatiens. Wind chimes tinkle in the wind and garden art peeks from around petals. The Smiths’ vacation home may be on wheels, but their life in Northern Michigan is perfectly grounded.

Want a motorcoach kitchen of your own? Find everything from contractors to landscapers in the Northern Michigan Home Services Directory!