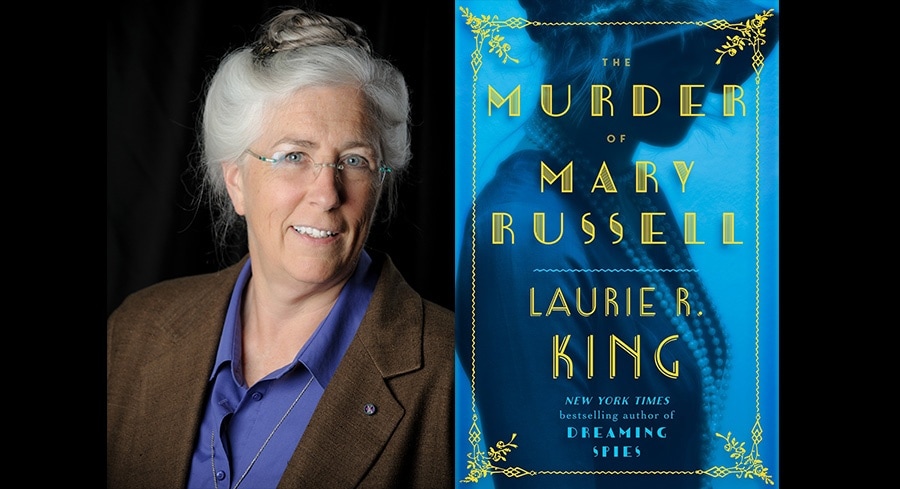 From her very first novel, which won the Mystery Writers of America’s Edgar award for best first novel, the prolific King has captivated readers over two dozen books, in both series and stand-alone formats. Her Traverse City visit is timed to the release of the latest in her Mary Russell historical mystery series, The Murder of Mary Russell. Set in the early twentieth century, the series began with a 15-year-old Mary Russell meeting Sherlock Holmes and proving herself a quick study under his tutelage. As the series evolved, the two fell in love, marry and traveled the world solving mysteries together. “Murder” is Russell & Holmes’ 14th adventure –the title hints that it might be their last.

Laurie R. King is as vehemently anti-spoiler as one would expect, but via email, the Santa Cruz, Calif. resident shared with guest host and author Cari Noga some of the inspiration and process that keep her at the keyboard. To hear more, get tickets for the event while they last.

Sherlock Holmes has such a strong fan base. How did you summon the gumption to reimagine Conan Doyle’s character and stories? Is the feminism you studied in college at work?

I came at the matter backwards, since from the start I was more interested in Russell than I was in Holmes.  That meant that he became a supporting character for her stories—which, had I known more about Sherlock Holmes and his fervent fandom at the time, might have given me pause. But in blissful innocence, if not ignorance, I went ahead with the young woman, and was well and truly immersed by the time the thought occurred to me that people might wonder what gave Laurie R. King the right to reinvent the Holmes Canon.

When did you first read a Holmes novel? How did the idea of reincarnating Mary Russell as a protagonist occur to you?

I probably read a couple of the stories in high school English classes, but as I say, I didn’t read my way through the Doyle stories until I started writing Mary Russell.  Russell is a modern version of the Great Detective: a female, feminist, 20th century version of that incredible mind. Only as time went on did I begin to focus on the potential in Holmes himself, and begin to explore how this radical change in his life might affect the Great Detective. Later books explore that—and lay the groundwork for The Murder of Mary Russell, when the sight of her blood on the floor shakes him to the bone.

In your online biography, you say that you are Mary Russell – or that you were her when you were 15. Bookish, introspective, preoccupied with matters of the head rather than heart. Do you still consider yourself kin? Would you be friends?

Oh, I wish I were Mary Russell, but honestly, she’s always been infinitely more clever and competent than I. However, I do think that she appeals to young women the same way she would have appealed to me at that age, as a girl with wit and the nerve to stand up to absolutely anyone.

I’ve used third person passages in several of the Russell “memoirs” now, since there are times when giving the reader information second hand, by means of a note or a conversation, becomes awkward.  It also lets me shift out of the limitations of first person in tone and perception.  And I find that so long as the reader is quite clear on how those shifts function and why, it’s not a distraction.

Conan Doyle also veered from his narrative formula when he wrote The Adventure of the Gloria Scott, the Sherlock Holmes story that Murder is based on. Have I deducted an homage?

Not just homage—“Gloria Scott” is the foundation for the entire story.  Not that Conan Doyle made any connection between that short story (the first case for a very young Sherlock Holmes) and Holmes’ later life, even though a character in the story shares a surname with Holmes’ Baker Street landlady.  (Actually, “Hudson” seems to have been popular with Sir Arthur, since there are two other uses of the name in his Holmes stories.)  However, from the beginning of the Russell series, I assumed there was some link, and this explains just what it is.

The egalitarianism of Holmes’ and Russell’s relationship is not typical of their era. As a writer of historical fiction, how do you reconcile being true to the period with being true to your characters’ nature?

I’m not sure that equality is typical of any era, since even in the 21st century, women push daily against economic and social barriers. That’s what a historical writer finds so interesting: the past is different from the present, yes, but it can also be startlingly similar. In any time and all places, one finds individuals who are comfortable outside the norm—be it a woman setting off into the Arabian sands, or two people in a marriage of equals.

Your own extensive travels have helped inform the settings of the Mary Russell novels. A substantial part of The Murder of Mary Russell occurs in Australia. What personal experiences did you have Down Under that worked their way into the novel?

I’ve been to Australia three or four times, and although the past century saw even more enormous changes there than in England or the US, one still finds traces of the nineteenth century—especially in the gold country north of Melbourne.  But more than that, it’s the expansiveness of the landscape and the vigor of the Aussies themselves that hit the visitor, and no doubt make their way into her writing.

Your other series features a contemporary American detective, Kate Martinelli, and your standalone novels are also set in more contemporary periods. How does the need to shift between contemporary and historical characters affect your writing?

I find it difficult to live in the same book for more than a year at a time, which no doubt is one reason why Russell & Holmes travel so much, since a change of setting keeps me excited about the stories.  But rich though the world of history-mystery is, there are some stories you can’t tell in the past—particularly in the somewhat whimsical, even tongue-in-cheek setting of Mary Russell and Sherlock Holmes.  So yes, I like to stretch my mind and my skills, and explore new worlds, even if some of those are my own.

Your efforts to publish your first two Mary Russell books were unsuccessful, and you were finally published with your third book, a Kate Martinelli novel. Now, more than 20 years later, Mary Russell has had more than twice as many adventures as Kate. Does it surprise you that Mary turned out to be more popular? Why or why not?

I can safely say that I’m surprised by success of any sort—no new author really imagines anyone other than family will read her book.  But surprised by readers preferring Russell to Martinelli? (Numerically, at any rate—Martinelli’s fans are dedicated!)  Not really.  Russell’s voice and setting are precise and distinctive, while the Martinelli’s are at base police procedurals (with a degree of depth.)  Because they are more instantly recognizable to what crime readers expect, A Grave Talent sold (and won prizes) before the more quirky The Beekeeper’s Apprentice.  However, as often happens, once a story finds a hold, its difference is what makes it attractive.

What can your readers look forward to next?

After The Murder of Mary Russell (and its e-short companion, “The Marriage of Mary Russell”) I’ll be inhabiting the very opposite end of the Crime spectrum for a while, writing a contemporary standalone thriller called Career Day.

Traverse City writer Cari Noga is the NWS guest host for “An Evening with Laurie R. King” on April 6. A former newspaper and radio reporter, she is the author of Sparrow Migrations, a novel she self-published in 2013 that was acquired and re-released in 2015 by Lake Union Publishing. She is working on her second novel, tentatively titled Piñata Tears.