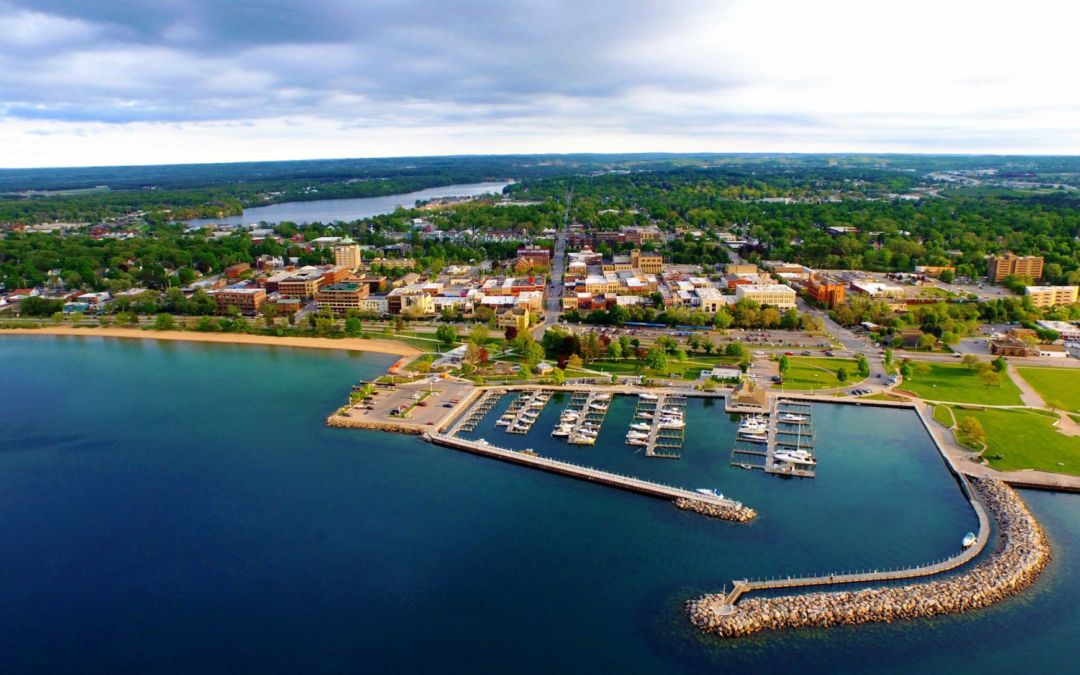 Whether you are a visitor or a long time resident of Traverse City, you know there’s a lot to do here! Check out some of the top Traverse City attractions to make sure you make the most of your trip to town. 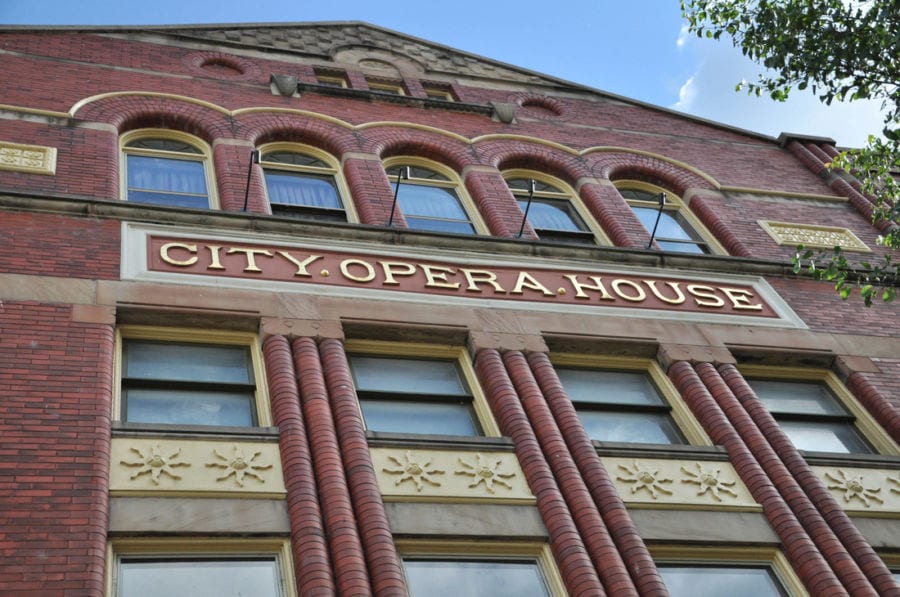 The City Opera House has been putting on shows since 1891 in downtown Traverse City. It’s one of six historically intact Victorian Opera Houses in Michigan and during its heyday, it hosted plays, concerts and operettas, gala balls, social functions, community festivals and celebrations. In 1972, it was added to the National Register of Historical Places and shortly thereafter it was restored to its former grandeur. Today, the City Opera House is a thriving (and beautiful!) venue that has partnered with Michigan State University’s Wharton Center for Performing Arts to bring even more exciting and new shows to the stage. It’s also the host of the National Writers Series, forums and films for the Traverse City Film Festival, weddings, private functions and much more!

Downtown Traverse City is a mecca for inventive restaurants, distinctive shops and cozy cafes. Spend a day on Front Street shopping, meet friends for lunch, walk down to the bay, or sample from one of the many microbrews around town. Located a block away from Front Street, The Warehouse District has seen a huge revival in the past couple of years and is home to the Workshop Brewing Company, a clothing store called Relish, a new coffee place BLK MRKT, a make-your-own terrarium shop and more (check out everything the Warehouse District has to offer here). You can plan a stay at one of Traverse City’s newest additions, Indigo Hotel—its rooftop deck/restaurant offers spectacular West Bay views. The Old Town district, just a few blocks south of the waterfront at 8th and Union Streets, is home to Traverse City favorites like Maxbauer’s Meat Market and Brady’s Tavern. This district is also home to the Blue Tractor Restaurant, Brewery Ferment, and the Old Town Playhouse. Walk the historic brick neighborhood streets of Traverse City’s 6th Street to see the impeccably kept Victorian homes of the town’s founding fathers. 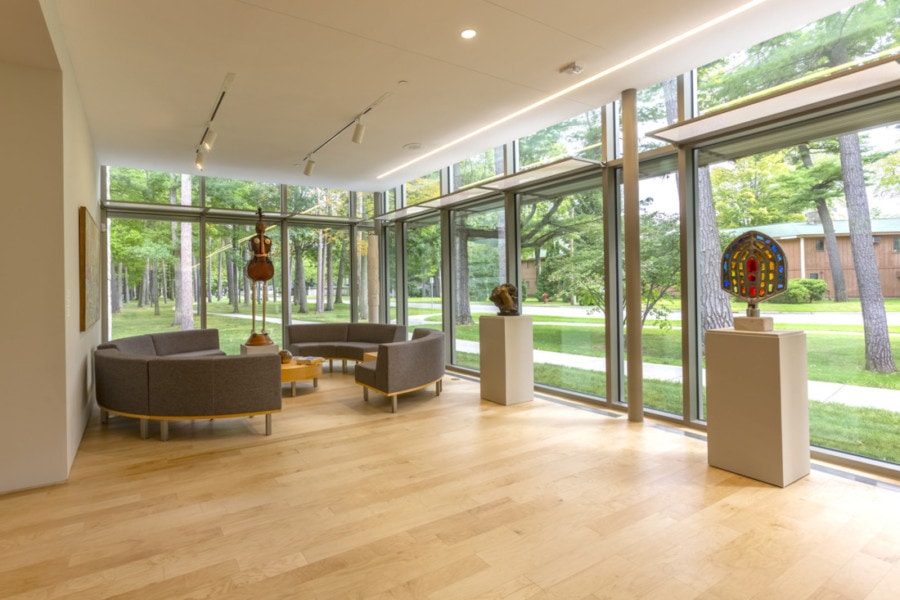 Drive a few minutes from downtown and you’ll discover the premier cultural facility surrounded by white pines. The polished aluminum sculpture in front is called Equilibrium and was created by Hanna Stiebel in 1991. The Dennos has brought the world to Traverse City since its opening more than 20 years ago. They’ve had mummies, Andy Warhol prints, human bodies, paper art and more on display over the years, and every year, several collaborations are established both locally and globally. Not only are the rotating exhibits always surprising and innovative, their permanent collection, called Inuit art of the Canadian Arctic is one of the largest and historically complete collections in the United States. The Dennos also houses Milliken Auditorium, which hosts local forums, national stage productions, concerts and more. It only takes a 15-minute drive from the heart of Traverse City to arrive at one of the most world renowned schools for the arts (the alum list includes Jewel, Josh Groban, Norah Jones and Betty Who.) Not a bad drive considering once you get there you’re next to a stage that has been home to Willie Nelson, Jason Mraz, Prairie Home Companion, BB King, Vienna Boys Choir, Dierks Bentley, Chicago and Guster (just to name a few). There’s something going on no matter the season, including ballets, theater productions and musical performances. In the summer, students are easily spotted wearing their signature “Interlochen blue” outfits. 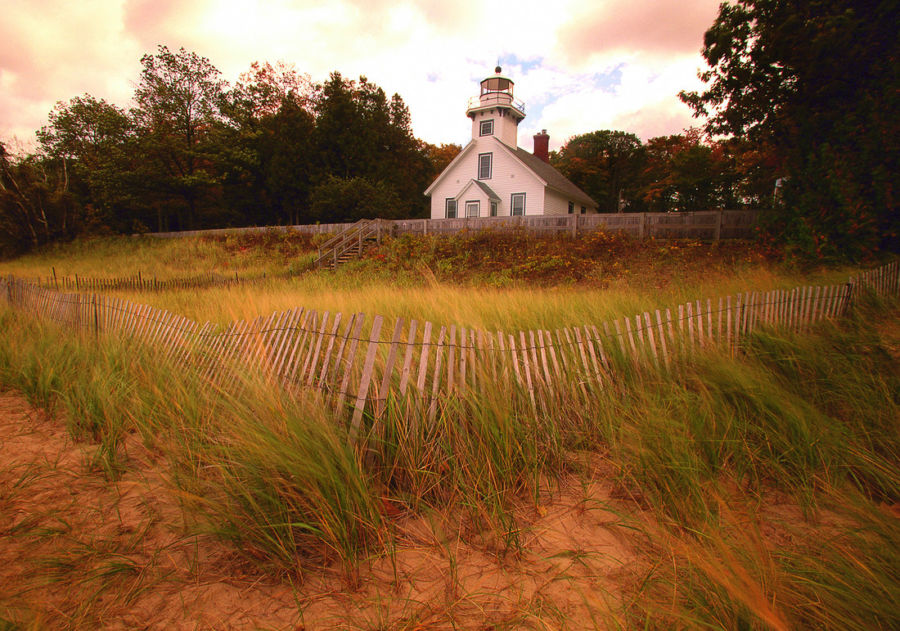 This slender 22-mile peninsula stretches along shoreline views of the Grand Traverse Bay, acres of cherry orchards, eight wineries (plus rows of healthy, flourishing vines) and fresh farm-to-table fare from restaurants such as Mission Table and the Boathouse. Old Mission is also home to actress Amy Smart and model and carpenter Carter Oosterhouse and their winery, Bonobo Winery. Spend a day on a wine tour or take a drive and watch the sun set over glittering water and rows of vines. At the end of the peninsula don’t miss the Mission Point Lighthouse—from 1870 to 1933 it guided mariners to safety, but now it’s a great place to get a glimpse into the past. 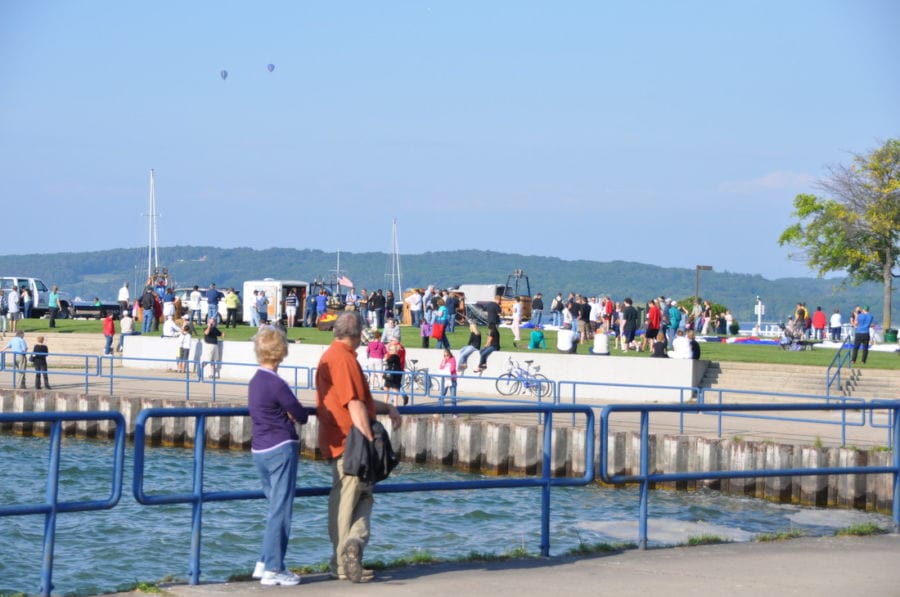 Traverse Citians and visitors alike are drawn to the Open Space park for its remarkable views of West Grand Traverse Bay. In the winter, build a snowman or be wowed by the frozen waves of the bay crashing through the railing. In spring, around prom time, hundreds of local students pose in chiffon against the backdrop of the glinting water and shiny boats in the marina. In the summertime, people flock to the Open Space to play Frisbee, fly kites, ride bikes, picnic and more. The volleyball courts and beaches along West Bay are busy with sunbathers and sandcastle builders. The Open Space is home to the National Cherry Festival, is a place to watch free outdoor movies during the Traverse City Film Festival and serves as a base for several festivals. Close to the Open Space, just east of the Marina, is Clinch Park, which has been transformed from an old zoo to a summertime dream, with water activities like a splash pad for kids and a concession bar. Rent kayaks or paddleboards at The River, or play on the beach!  If you’re tired after a day out, catch some flicks year round at The Bijou by the Bay, nestled in amongst everything like the “jewel” by the bay that it is.

Recently named the No. 1 theater on the list of the “10 Best Movie Theaters in the World” by TheCredits.org, the renovated State Theatre is located in the heart of downtown Traverse City. Built in 1916, the State is owned and operated by the Traverse City Film Festival. People come to the State for the complete experience: friendly volunteers, comfy seats, the amazing starry ceiling, crunchy popcorn, inexpensive ticket prices, interesting movies and engaging events. It’s become a community gathering point since it reopened in 2007. Enjoy 25 cent matinees, Friday Night Flicks, live events via satellite, premieres, community events and much more.

The Village at Grand Traverse Commons

A renovated State Hospital might seem like an unusual gathering place, but the transformation and growth that this 63-acre estate has seen in the last decade is overwhelming. It’s gone from a group of abandoned and decaying buildings to a thriving community with a bakery, astoundingly delicious cuisine, coffee shops, a wine bar and shops galore. Newer businesses include: the breakfast hot spot Sugar 2 Salt (S2S) and the family-friendly ELF, offering a play space, classes and drop-off child care for members (check out this video with an inside look at ELF). Building 50 is home to Cordia, a senior residential club. Take a hike on one of the many trails and get a glimpse of some of the buildings that still need to be renovated or go on a tour of the tunnels and see some of the unrenovated parts up close and personal while learning about the history behind this architectural marvel. (Here’s an inside look at the Village at Grand Traverse Commons including a sneak peek of the underground tunnels.) 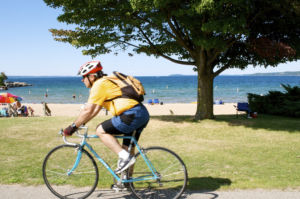 The great thing about Traverse City is that there’s something to do outside all year-round. Are you a hiker? Biker? Walker? Runner? Skier? Boater? Then Traverse City can accommodate your outdoorsy needs. Take a hike through one of the many trails around Traverse City, take your bike for a spin, or just soak up the natural beauty that surrounds you. We are home to athletic events like the Iceman Cometh in the fall, Bayshore Marathon in the spring, and many more events that celebrate health and fitness in our remarkable landscape.

In the words of summer resident Chef Mario Batali, “the food scene has really exploded in the region. There are farmers’ markets and hip-looking people farming and butchering. It’s very cool.” Mario isn’t the only one with good taste—besides his glowing reviews, Traverse City is also the recipient of several foodie nods from nationally renowned sources. Bon Appetit named Traverse City one of “America’s Five Top Foodie Towns,” Livability.com called it one of “America’s Top 10 Foodie Towns” as well as “Top 10 List of Surprising Foodie Towns,” The Daily Meal named it one of “America’s 11 Best Small Towns for Food” and Midwest Living placed Traverse City in first place in its list of the “Midwest’s Five Top Food Towns.”

If you need further convincing, sample cuisine from some of our restaurants. Traverse City offers everything from Latin to Italian, French to Asian Fusion with American classics like delicious hamburgers, wood-fired pizza, and some amazing fresh fish. There’s also plenty of farm-to-table fare with fantastic views to boot. Traverse City offers something for all taste buds.

Regardless of the season, Traverse City probably has a festival for you. A few highlights include …

Yep, there’s really that many. See the excitement of the Winter Microbrew and Music Festival 2016.

The moderate climate and warm summer days have proven very fruitful for the wine industry over the years and Northern Michigan wineries continue to crop up and flourish. From Old Mission to Suttons Bay and from rose to riesling, a trip to town wouldn’t be complete without a sampling of some local wine. Click here for the full list of wineries in the region. Traverse City has been the recipient of several accolades and awards for its wineries and wine: TripAdvisor.com listed Traverse City as “One of America’s Top 10 Wine Destinations,” USA Today named Traverse City as one of the “Top 10 Places to Enjoy Local Wines,” Touring and Tasting named Old Mission Peninsula one of “Seven Top Wine Regions to Watch” and Travel + Leisure Magazine listed the “Leelanau Peninsula Wine Trail as one of America’s Most Scenic Waterside Drives.”

The microbrew scene in Traverse City has expanded by leaps and bounds in recent years. Traverse City now boasts 11 microbrews, from Rare Bird Brewpub with its recycled building materials and down-to-earth vibes, and Brewery Ferment’s boutique feel with solid brew and Michigan beer-inspired clothing, to Right Brain Brewery with its experimental beers and an edgy space to match. The Travel Channel ranked Traverse City among the “Top 7 Beer Destinations in North America” and Draft Magazine called it “One of 3 emerging beer towns.” Check out a full list of our local hangouts here. 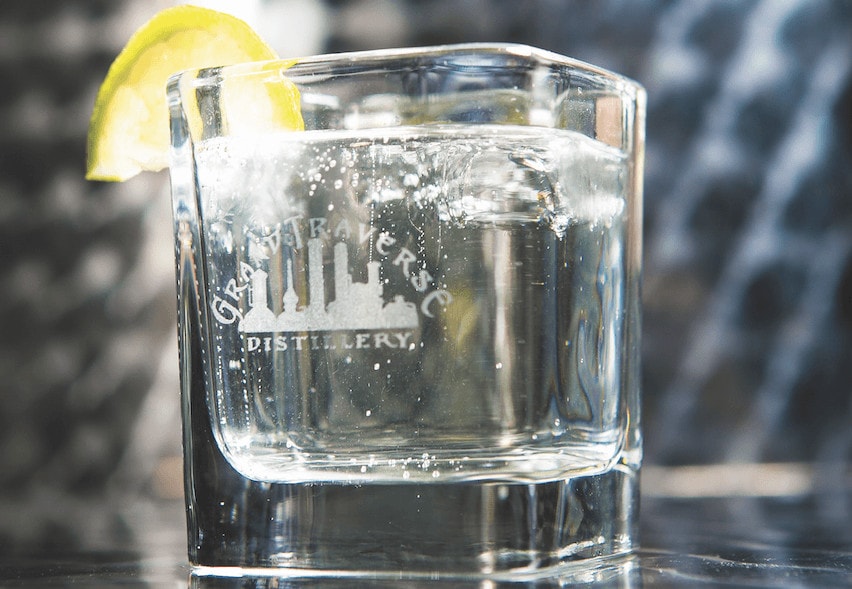