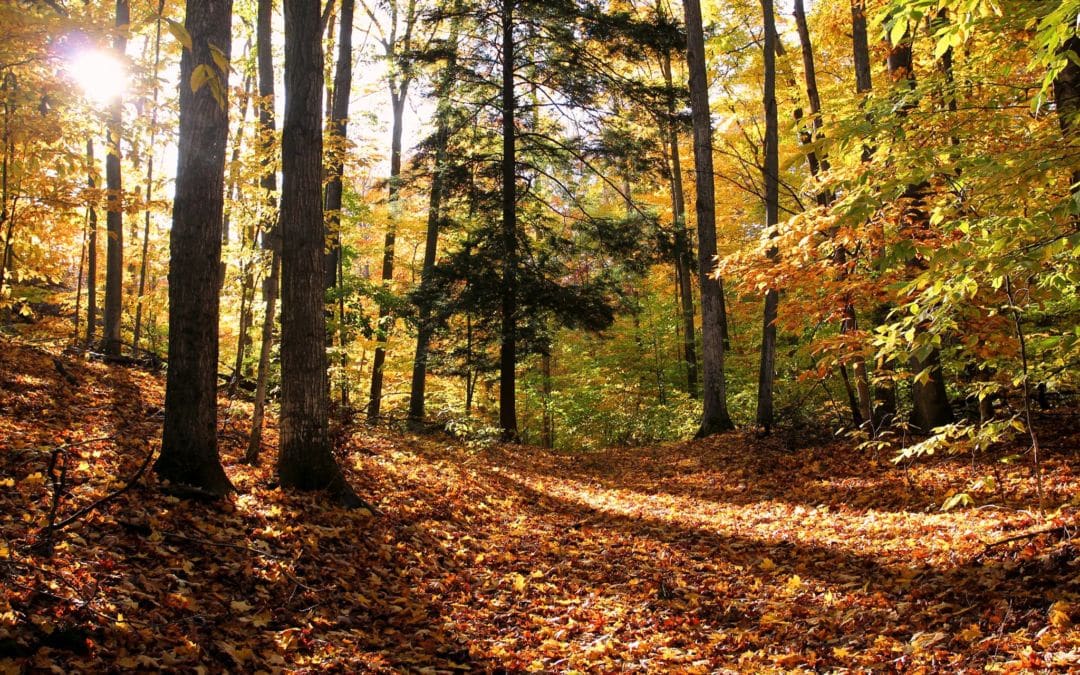 The Leelanau Conservancy recently closed on and assumed possession of the largest tract of land its team and supporters have ever protected. Called Palmer Woods, the 707-acre parcel stretches 2 miles along the east side of Big Glen Lake and is a classic and captivating reach of northern hardwood forest. We connected with the conservancy’s executive director, Tom Nelson, to get some back story and hear the vision for this publicly accessible preserve.

We’ve heard this tract has long been in the vision of the conservancy … just how long?

Really since our very beginnings. We couldn’t help but notice a whole bunch of acres there owned by one family. So very early on that tract was a high priority for protection. Thankfully the family, the Palmers, had also heard of us.

Can you tell us a bit about the family?

Dan and Helen Palmer live most of the year in Hawaii, but Dan grew up in Frankfort, and part of his heart was always here. Over the years he put together this large parcel of land. Then a few years ago, Dr. Palmer came to us and said, “I’m getting up there in years and I have no family in the area, so we’d like to liquidate. Would the conservancy be able to purchase the land?”

Yes, because in terms of total acreage and cost, we’d never taken on a project his large.

But it sounds like there was little question about how to proceed.

We swallowed hard, but we knew we had to do it. The price tag was $3.1 million, and we needed to build in an additional amount to nurture the property into perpetuity, so our fundraising goal was $4.1 million. That began in earnest in late 2014, and within about a year we reached that goal. We were absolutely stunned that we hit the goal in 12 months. We were hoping we could get within striking distance.

Tell us about the type of person who pitched in.

There were over 600 families from all over the country. From the Midwest, from Seattle, even internationally; people from the U.K. supported Palmer Woods. We were thrilled because there were so many donations, large and small, $10, $75, people gave what they could out of a love of Leelanau. But of course we had some very large donors, some family foundations. There were no public dollars involved. We have a reputation for stewarding our contributors’ contributions in a way that honors their commitment, and so we will be taking great pains to do that right.

The property is open to the public. We have mapped out a couple of loop trails and put up a kiosk with a map off of Wheeler Road. But we are asking people to stick to the marked trails for now. It’s easy to get lost on the miles of logging trails out there.

Give us a sense of the vision for Palmer Woods.

We are thinking a little bit differently about Palmer Woods than other properties. Other than hiking and cross-country skiing, could others also use this place and not degrade the resource? There are probably 12 to 15 miles of logging trails on the property. We’ve hired master trail planner Jeff Parker, who is coming in mid-April, to take a hard look at all 707 acres and develop a feasibility study for the trail network. We’ll explore using the existing trails, connecting some possibly, to enhance the breadth of user groups.

I understand this was a working forest—the Palmer family selectively logged the property—how does that fit into the vision?

Correct, this has been a managed forest for several decades, and we want to augment that further, in a way that could enhance biological diversity and forest health. We want the property to be a demonstration forest, a laboratory that shows you can do that and still get a return on your investment.

Color that in for us a bit.

Well, there are quite a few land owners in Northern Michigan who have hardwood forest tracts and these forests are facing pressures we’ve not seen before. Pests, diseases, climate volatility, invasive species that just were not with us before. Suddenly we are facing all of these things. But how can we continue to manage forests in ways that are sustainable and offer a return on investment. We are in early stages of working with partners in academia and foresters: is there a way to do both, to sustain a forest and also profit from it.

The conservancy has touted this as a water quality purchase too. How does that work?

We are really emphasizing the protection of water quality because we are really blessed with high quality water in our lakes and streams in Leelanau County, and part of the reason is the way our forest soils act as natural filters—our water bodies are groundwater-fed here. There’s so much water flowing under the forest that having been able to protect 707 acres will go a long way to keeping Glen Lake’s water clean.

When did the deal actually close?

We took ownership on February 29, a leap year day, which, when longterm thinking is in your DNA, that strikes you as just right.