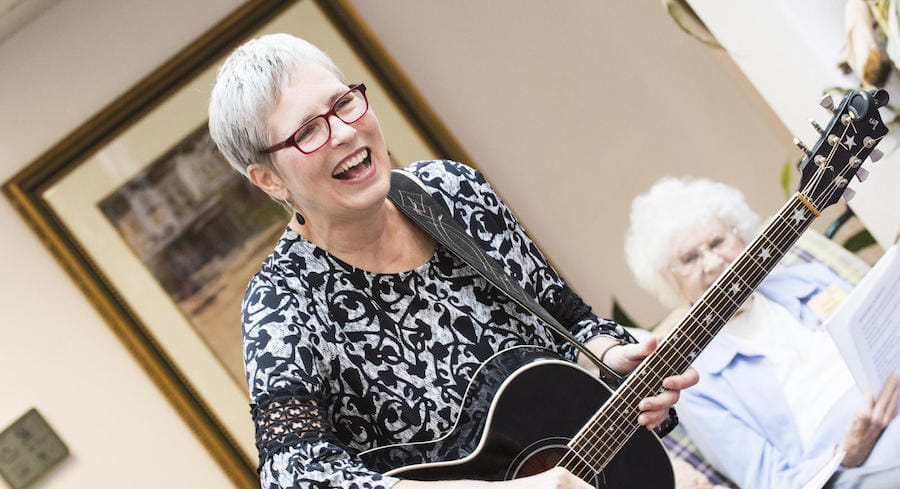 When her father-in-law was unable to carry on a conversation because of his dementia, Mary Sue Wilkinson was gratified to discover the positive power and influence that music had on his memory loss. She decided soon afterward to help others discover the connection between music and memory, dementia and Alzheimer’s care.

Mary Sue is now the founder of Singing Heart to Heart—a company in Traverse City that sings to seniors—and the Young at Heart music program in Northern Michigan. Plus, she’s the author of Songs You Know By Heart: A Simple Guide for Using Music in Dementia Care.

Cymbre Foster chatted with Mary Sue to learn more about her musical efforts and their benefits to Northern Michigan health.

It was only a moment, but one so powerful it would irrevocably change the course of Mary Sue Wilkinson’s life.

When her father-in-law was unable to carry on a conversation because of his dementia, Mary Sue brought along her guitar to sing to him. A retired minister, she knew he liked music and it helped pass the time while she sat with him. To her surprise, when she sang the hymns he knew and loved, he began to sing along with all the words and in perfect pitch, even adding harmony. She was pleasantly surprised and deeply moved to see how he connected to the music and how meaningful it was for him. Later she would learn the science behind what had happened—that the brain often retains music memory events after language is lost.

Mary Sue is no stranger to the joys of music. She grew up in a musical family. Her mother had a beautiful voice and played the piano and organ. Mary Sue got her first guitar when she was 12 years old, purchased by her mother with Green Stamps. While growing up, Mary Sue sang in school and church choirs. In college she started playing in bands. She went on to earn her master’s degree in early childhood education.

Mary Sue saw firsthand the transformation in her father-in-law and intuitively recognized the power of music at work. She decided to help others with memory loss through music. Going beyond her intuition, she set about learning all she could about the connection between music and memory.

In 2013, Mary Sue founded Singing Heart to Heart and began the Young at Heart music program, providing music experiences for seniors, including hundreds of senior sing-a-longs. Wilkinson also conducts music visits that provide a personalized music experience for people living with memory loss. The sing-a-longs and visits also offer a way for family members and caregivers to engage in a meaningful way.

When Mary Sue talks about the power of music, she boils it down to three primary benefits: to connect, to awaken memories, and to bring joy.

“Music and singing often bring about an awakening of sorts. It can help people find their way back to memories, to communication, to connection, and to happiness,” she says.

Soon after Mary Sue launched her business, she realized that her reach and therefore the impact of music in people’s lives was limited. She also discovered that there were very few high-quality recordings of the old songs people loved to sing along with. So she recorded and produced her CD, Songs You Know by Heart. Mary Sue’s first book, Songs You Know By Heart: A Simple Guide for Using Music in Dementia Care, includes her CD. Teepa Snow, one of America’s leading educators on dementia, contributed to and endorses the book.

You talk about the power of music. What does that mean? Why are we so profoundly touched by music?

The answer to why music is powerful is both complicated and simple. The complicated part has to do with the brain, which science suggests is literally hard-wired to connect music with memory. Brain scans show that music lights up more parts of the brain than any other activity. Also, music and the sense of rhythm are stored more on the right side of the brain, which tends to be less damaged by Alzheimer’s and other dementias. The more simple reason that music is so powerful is because it affects how we feel. Music helps people connect. It helps people remember happy times. It can lift your spirits. It makes you want to move. Music is good for your health. Why is music powerful? It is uniquely human and it can make us happy.

You have seen how music has transformed dementia patients. Can you describe why or how this happens—how our brains work?

Well, I am not a neuroscientist but Teepa puts it this way: “You lose on the left and retain on the right.” The left side of your brain is where you store language. Stored on the right is music memory and your sense of rhythm. Music accesses a part of the brain that is less damaged by the disease, and the emotions associated with music help to sort of cement memories. Anyone who has ever heard a song on the radio that reminded them, or perhaps “transported them back” to an earlier time in their life, will understand this. I should note that it’s important for it to be the “right” music. It is the music of our youth that seems to be best for awakening memories. That’s why I’m so passionate about “bringing back the music” for seniors. Just at a time when music could be so beneficial, many seniors, not just those living with dementia, have lost access to music due to changes in technology.

What does it feel like to see someone literally transformed by a song? I’ll bet it never gets old!

Watching someone who is transformed by a song is an amazing gift. The transformation is unique for each person but almost always involves not just movements or verbalizations that tell you the music is having an effect, but more importantly, it almost always allows me to truly connect with that person. Very often it involves locking eyes, smiles, and perhaps holding hands or a shared movement. The connection touches me as much as it touches them.

Tell me your favorite “transformative” story—if there is one!

Well, probably the story of my father-in-law touches me the most deeply. But there is another experience I had that always stays with me.

It was Christmas time and I was singing carols to a group of seniors. A gentleman with Alzheimer’s, who was hard of hearing and spent most of his time in a wheelchair, sat front and center. During previous visits he never showed any response. But this time, when I sang “Silent Night,” he lifted his head and opened his eyes before breaking into a huge smile. He looked at me and said, “Wonderful, wonderful, wonderful.” When the song ended, I stroked his hand, leaned in, shared a smile, and thanked him. I moved on to other songs and he stayed “in the music,” dancing his hands on the tray in front of him, in time to the beat, beaming all the while. He eventually reached his hands up to me. I took them and together we swayed back and forth. He was connecting! I will never forget that smile, or the magic of a single song.

You not only work with dementia patients but have programs for little ones as well. How have you seen young children transformed by music?

The little ones obviously don’t have so many memories tied to music. But they have such an open spirit and they don’t filter things. They let the music in so naturally and respond with their whole bodies.

Teepa Snow, an expert in dementia and Alzheimer’s care, has contributed to and endorsed your book. How did that happen?

When I started playing with seniors, a friend of mine who is an activity director told me about Teepa. I started reading her newsletters and buying her teaching videos. Teepa has always advocated using music in dementia care. I decided to reach out to her to share the CD I made and introduce her to my work. Then, a chance meeting (you will just have to read the book) furthered the connection and I was invited to attend a training session with Teepa. At that time, I was already writing the book and asked if I could reference her work in the book. I sent Teepa the draft and the collaboration has grown from there. In addition to the book, I’m in the process of working with one of her trainers to develop a pilot training about using music in dementia care.

You’re a musician, what inspired you to write a book?

My original plan was just to write a short little guide giving people suggestions for how to use the songs on my CD.  But it became much more as I incorporated what I had learned from Teepa and from my own experiences. I’m a career educator and it just seemed natural to me to want to help others learn how to do this. There are only so many hours in a day for me to sing with people, and I really hope this book will help many, many people learn how easy it is to bring music into care for people with dementia.

Who is your readership?

I started out brainstorming with my best friend. She and I have collaborated on many projects over the years. The next step was much harder. I spent a lot of time working on making the format simple. I understand that caregivers and activity directors and family members don’t have time to sit down and read a big book about how to use music. They need something they can grab and skim through and use right away. So I spent a fair amount of time whittling it down and providing the short vignettes that help tell the story. I put it down, picked it up. I had big chart papers up all over the walls of my office as I worked out the chapters and tried to figure out how best to organize it.

I just finished Elizabeth Gilbert’s book The Signature of All Things. And, I just read Dick Van Dyke’s book Keep Moving and Other Tips and Truths about Aging. I loved it! He’s 90 and still singing and dancing every day. I’m currently reading Broad Influence: How Women are Changing the Way America Works by Jay Newton-Small.

What are your plans for the future?

I’m looking forward to implementing the training that Beth Nolan (one of Teepa’s trainers) and I are developing based on my book. In addition to that training, I will also offer independently conducted presentations introducing people to the use of music in dementia care. I have another book in draft form called Songs You Know by Heart: A Musician’s Guide for Playing Music with Seniors. Last year, I conducted nearly 400 singing sessions with seniors and I expect to keep doing that. Perhaps most exciting, I recently purchased a small RV and I’m looking forward to hitting the road again this summer, going to some music festivals and playing music with my duo Drive South.

What are your words to live by?

Photo(s) by Singing Heart to Heart