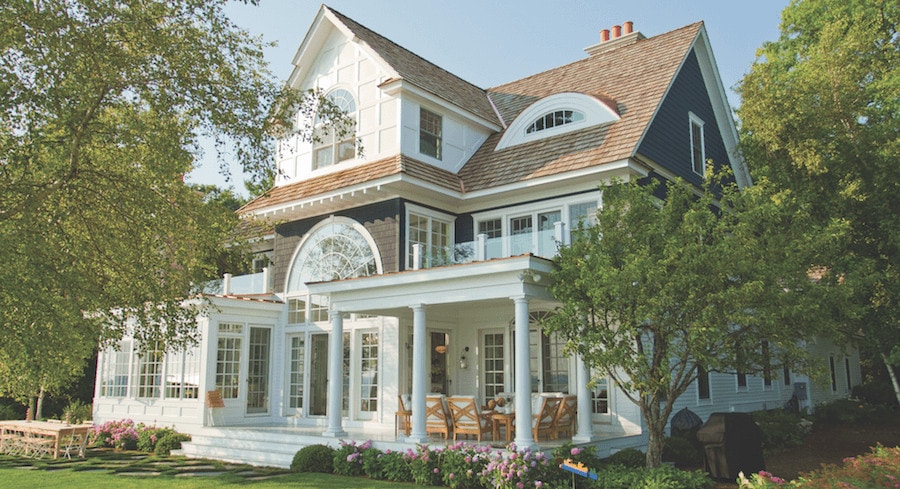 A designer and her client transformed a dated Victorian-style Little Traverse Bay home built in the 1980s into … aahhh. A crisp facelift, a serene palette, and carefully chosen antique pieces turned this Northern Home & Cottage into an oasis of relaxed style.

Discover time at the Harbor Springs home called “Glenn Beach” with this feature originally published in the February 2016 issue of Northern Home & Cottage.

It all started with a clock, says Vee Mossburg, the lead designer at Cottage Company, a design-and-build firm in Harbor Springs-the antique, light blue Swedish Mora clock that is tucked into a niche in the front hall of this gracious home on Little Traverse Bay, to be specific. The home’s owner, Linda Orlans, a Birmingham-based entrepreneur and lawyer, had long coveted 19th-century Mora timepieces and knew she wanted one to serve as the centerpiece of the renovation of the vacation home she calls Glenn Beach.

“I was calling antique dealers all over the world,” Vee recalls. She eventually found just the right clock in Texas and had it shipped to Northern Michigan. “Once we found it, everything else fell into place,” she says. The homeowner and designer went on to develop the home’s color scheme from the clock’s creamy blue palette, mixing it with crisp off-whites and other soft tones for an easygoing elegance. The color can now be found in varying amounts in each room of the renovated house. “We wanted it to be casual, but it had to have a certain level of sophistication,” Vee says.

With its enviable Lake Michigan site, the home, built in the 1980s, was inspired by the area’s Victorian resort vernacular. When Linda bought the furnished house in 2010, however, its room decor had never been updated and was weighed down by the heavy floral draperies, printed upholstered furniture and intense, saturated hues popular three decades ago. That eye-popping interior was enclosed in a mauve, faux-Victorian exterior.

The home’s cloying attitude didn’t deter Linda. “It was love at first sight,” she says. “The moment I walked through the door I knew it was right. The neighborhood is great, on the water and walking distance to town … the bones of the house are well thought out and the quality outstanding.” It also had “big gathering places and amazing light,” and “windows in all the right places, so the light streams through the house from morning to night,” Linda continues.

With such great bones, the renovation path and palette was clear. “People today want cleaner lines,” Vee says. “They come up here to escape, so they want a place to calm down, a place of sanctuary.” To accomplish that forward-thinking style, Vee looked backward. In the late 19th century, cottage owners seeking for a similar escape from their busy lives eschewed the fussiness of Victorian cottages for the more clean-lined Shingle architectural style. Taking her cue from history, Vee, working closely with Linda, exchanged the home’s mauve exterior for a crisp navy-and-white color scheme, replaced the conventional roof shingles with natural cedar shingles, swapped the sunburst motifs over the windows for shingled awnings and lost the gingerbread in the eaves.

With the backdrop set, Vee went to work fine-tuning the interior. While the only major structural change was enclosing one of two waterside porches to make a sunroom, every room was treated to new variations of beadboard, wainscoting, elegant trim work and moldings painted in creamy colors. Vee also changed the function of several spaces, including converting the formal living room into a dining/library area. Furnished with an antique table set in front of the fireplace, the room can be a place for casual meals as well as intimate dinner parties. With built-in bookshelves and cabinetry, the room doubles as a cozy spot for snuggling in with a book.

Working with Liz Firebaugh of Signature Kitchens, Vee and Linda gave the kitchen a creamy facelift, replacing natural wood cabinets, dark granite and a homely tile backsplash with fresh white cabinetry and marble on the backsplash and island. The team went on to convert the former dining nook on the kitchen’s waterside into a sitting area creating an open, expansive great room. “Our goal was to open it up so that Linda could really live and play in here,” Liz explains.

With its lake views, the great room is now Linda’s favorite spot in the house. “There’s also plenty of room for multiple cooks and tasters,” she says.

While she did away with many of the home’s heavier French antiques, Vee was careful to punctuate each room with at least one antique. “I like to mix for a sense of timelessness,” she explains. The designer considers the project, one of her favorites, some of her best work. She loves the layers of texture and is proud of the transformation. “I could definitely move in here,” she says. “I asked Linda for first right of refusal if she ever sells.”