Norte! Friday Bike Trains Start Back Up After Spring Break 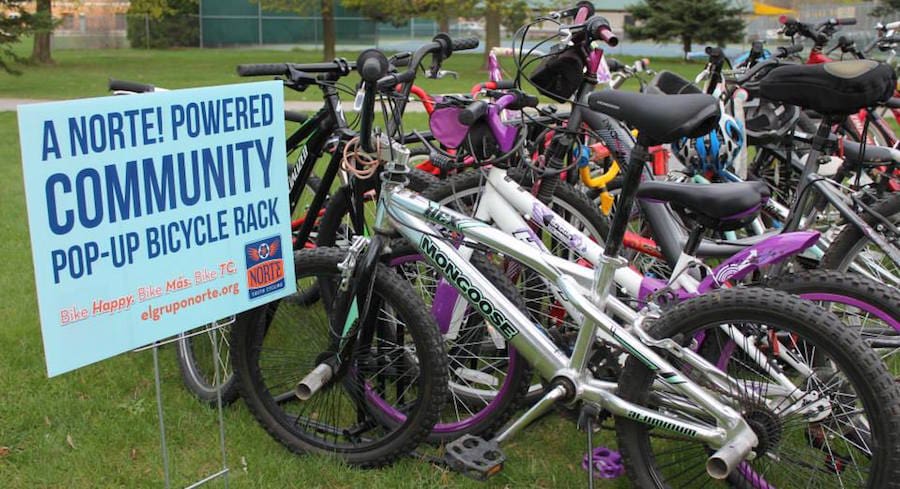 For the second year, Norte! in Traverse City is coordinating the community-wide Safe Routes to School project in partnership with Traverse City Area Public Schools and other neighborhood schools.

There are several programs for elementary and middle school students to participate in including Fridays Fantastico and The Great Traverse City Bike Train Experiment. Starting after spring break, 13 bike trains connecting eight Traverse City neighborhoods to five Traverse City elementary schools will depart each Friday to transport students from their local station to class.

A Norte! volunteer leads each bike train to and from school. Parents are responsible for getting their children to the station on time in the morning as well as picking them up after school. “Fridays Fantastico is a weekly celebration of walking, biking and rolling,” says Norte! Co-founder Ty Schmidt. “While we would love for people to bike or walk to school every day, we realize it can be hard and committing to one day a week is a more realistic goal.”

Safe Routes to School benefits both the community and the individual, Ty says. “Bike trains are more than getting from Point A to Point B,” he explains. “Kids are laughing and having fun.”

There are three rules for Fridays Fantastico: helmets are required, safe riding is mandatory and smiling and high fives are encouraged. “Safety is important but having fun is a close second,” Ty says.

The Benefits of Walking, Riding & Rolling to School

Norte! hopes to create a metro type map of each bike train, which will allow students to join in anywhere on the route. “We’re really trying to grow the biking and walking culture here,” Ty says.

In April, Norte! will present at the National Safe Routes to School Conference in Columbus, Ohio. Norte! was the only Michigan organization invited to present. The conference will include national bicycle and pedestrian safety experts and health professionals who will discuss the connection between active transportation and health and share ideas.

Norte! is looking for volunteers to lead bike trains. Find out how to sign up to help lead an existing bike train or start your own! Check out all of the Safe Routes to School programs here.

Find out more about Norte! and the Safe Routes to School project!