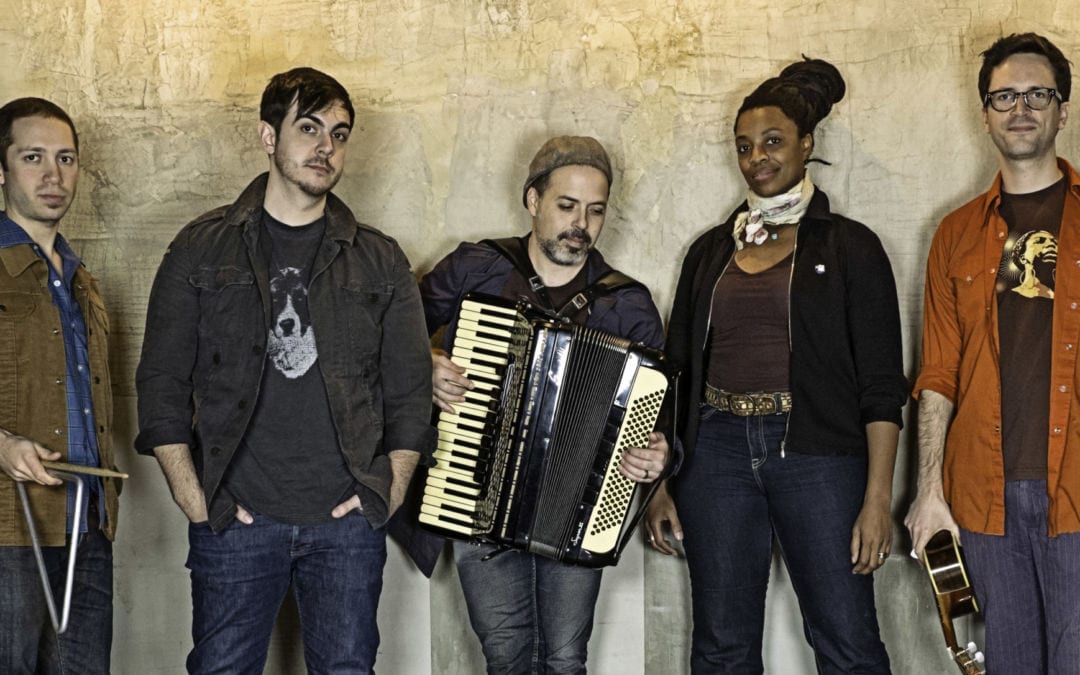 Genre-busting Matuto, named “American Musical Ambassadors” by the U.S. State Department, melds bluegrass and Brazilian folk in their music. MyNorth Media’s entertainment writer Ross Boissoneau tells us more about the group that combines Appalachian and South American musical styles before their concert at Crooked Tree Arts Center in Petoskey and the Dennos Museum in Traverse City this March.

The first-ever show for Matuto took place in 2009 when guitarist Clay Ross and accordionist Rob Curto stepped on stage in front of 10,000 people in Recife, Brazil. Apparently their combination of musical styles worked for both the crowd and the musicians. The two have been the core of Matuto ever since, enlisting various bandmates who play drums, percussion, bass, violin and other instruments in different configurations: quartet, quintet, sextet.

The group has continued its musical explorations, adding African sounds to its repertoire via its most recent recording, The Africa Suite. Each of the five touring band members wrote an original pieces based on their engagement with the people, sounds, and traditions countries they visited while on a 2013 State Department-sponsored tour of Africa. It includes references to Ghanaian highlife inspired by the gentle, unedited joy of the music scene in Accra, the country’s capital; a simple yet elegant melody inspired by a song sung by a class in an arts-centered school in Mozambique; a tune inspired by the band Zieti, who hosted and jammed with Matuto in Ivory Coast; the diverse music of Cameroon, including chant, an upbeat rendition of a popular local melody and a groove dedicated to one of its unique rhythms, bikutsi; and a song combining rock energy with rhythms and call & response derived from Senegal.

The group has performed its unique style of world music across the globe, including the Chicago World Music Festival, Expressions of Brazil Festival, The Philadelphia Folk Festival, the Kennedy Center, the Blue Note Jazz Club, and many more.

Individually, members of the group have worked with Herbie Hancock, Chick Corea, Steve Martin, Bela Fleck, Southside Johnny and the Asbury Jukes, Cyndi Lauper, Pete Seeger and others from across the musical spectrum. Ross and Curto work with several other New York City-based musicians from the jazz, blues and world music scene.

Whatever the genre in which their music lands, it typically includes danceable beats and instrumental dexterity. “The tension of cultural intersection is an exciting place to exist.  It’s what makes our musical choices feel relevant and exciting,” Ross says.

“Matuto is simply one of the most innovative groups we have presented in the last several years, with smart and fresh arrangements, where traditional North American music beautifully embraces Brazilian rhythm. What a joy!” – Alfredo Caxaj, Executive Director, Sunfest, London Ontario

Tickets are $27 in advance, $30 at the door for the Dennos show. You can purchase tickets via MyNorthTickets.com.

For the Petoskey show, tickets are $20, $15 for Blissfest members, $10 for students. Start at Blissfest.org.