The Mind Behind Craft Beer Cocktails at The Ridge Microbrewery 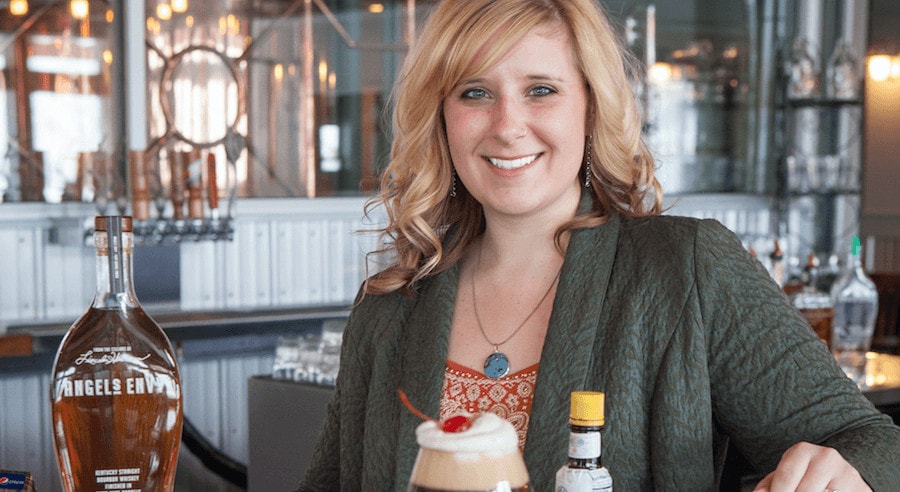 Meet Abigail Koprowicz, the general manager at The Ridge Microbrewery in Peshawbestown and the mind behind Northern Michigan beer craft cocktails. MyNorth’s Food and Drink Editor Tim Tebeau introduces us to cocktail chemistry.

This article was originally published in the March 2016 issue of Traverse, Northern Michigan’s Magazine.

Gaylord native Abigail Koprowicz studied sustainable business in Grand Rapids while cooking in the taproom kitchen at Founder’s Brewing Company. Seizing the craft beer zeitgeist Abigail got her Cicerone certification and cultivated a knack for mixing beer cocktails, which drive her dynamic beverage program at The Ridge Microbrewery in Peshawbestown. We sat down with Abigail to talk beer cocktail chemistry and get recipes for two tasty late winter libations.

Beer cocktails? Is this a new thing?

Not really. To some extent they’ve been around forever, especially in the UK. Everyone’s probably had or heard about the classics like the shandy, which is lager and lemonade, or a michelada which is basically a Bloody Mary made with beer. The popularity of craft beer and the focus on craft cocktails has spun off lots of new recipes.

What does beer bring to a cocktail?

Beer is really interesting in its capacity as a mixer because it adds a lot of flavor and mouthfeel to the cocktail without necessarily sweetening or diluting it. We created the winter warmer here at Ridge, which is our Rowster Coffee Porter mixed with 12-year-old bourbon, simple syrup and cinnamon. It has the hallmarks of coffee cocktail with more complex flavors.

Bourbon and porter, got it. Where else should we look for beer/spirit synergies?

It comes down to which flavors you want to bring out in the cocktail. Hoppy beers like IPA’s have a lot of herbal and citrus notes, which can jive with gin. Our house margarita uses tequila and Tandem hard cider. If you leave spirits out of the equation, which I recommend at first, try mixing beers with other beers.

What’s the best angle for experimenting with beer cocktails?

Like anything it’s probably best to start with simple ingredients and find your way into the right ratios. A basic shandy or snakebite that blends beer with citrus or cider is a great way to learn how flavors interact. Dark beers and fruit-infused beers can be blended for a cool effect.

Beer cocktail and bar snacks? Is there a Platonic ideal?

You don’t need to overthink this one. Salty and sour snacks are best, so fried or pickled anything.